Majority of the observers were blood bikers who made me aware of the charity and I realised I would like to be involved with the work they were doing.

The IAM RoadSmart course was spread over a six-week period, and the weekdays were to put into practice what I had learnt on the Saturday, so I covered about 200 miles throughout the week honing the skills that I needed to get to the standard that was required. The next observer I was assigned to on the following Saturday would know if I had done my homework because my previous observer to add the practises to my log. Over the six weeks I had learnt so much from the course, and on completion I was ready for my test.

My observer put in for my test and whilst I was waiting, I was having tests for prostate cancer and some of my observers were aware of this. It was on a Thursday morning I had to see the consultant at Clatterbridge Cancer Centre (CCC) in Wirral, and there I was diagnosed with prostate cancer. I travelled home feeling a bit down but with the mindset, it would not knock me down.

That evening I got a phone call from Dennis, my test examiner, saying he had a slot for the coming Saturday. I decided not to mention anything about my results that I’d earlier received and accepted the test date, knowing if I had disclosed what I had been told earlier Dennis would have probably told me to wait a bit longer just in case I wasn’t in the right frame of mind.

I put the cancer diagnosis to the back of my mind as taking this test meant a lot to me. I had worked so hard to get to this stage, so off I went up the Preston area on the Saturday and I passed my advanced motorcycle test.

Soon after that I joined the charity Merseyside and Cheshire Blood Bikes and I’ve not looked back since.

I noticed that night shifts (10pm to 9am) were the hardest shift to cover, and I’m retired I can be flexible so I cover it as much as I can, as well as doing day shifts.

Before COVID-19 a night shift was quite relaxed and you would get about 3 call outs, give or take, which one would be before midnight, one throughout the night and possibly one in the morning.

I’m aware if there’s a poorly patient as you’re asked to do regular sample runs throughout the night, mainly from Clatterbridge Cancer Centre, so by using the blood bikes I could get the samples to Arrowe Park Hospital labs quickly and the results would get back to the cancer centre and passed onto the Doctor.

On a night shift you could go to bed as calls weren’t hectic but even so I would sleep with one eye open and ears on full alert waiting for the phone call.

Then COVID-19 appeared, at first it was quite quiet then Bromborough micro labs at Wirral started testing for COVID-19. This meant it went from me sleeping in bed to being on the couch with a quilt and watching the telly (pointless taking my boots off but I respect my carpet so I must).

Wirral has been incredibly busy with up to 13 runs throughout the night, even though the River Mersey divides the group riders, putting themselves on the rota of who will come ‘over the water’.

We have a Mersey Gateway Bridge now as well as the two Mersey tunnels to collect or deliver packages day or night, for riders who are not local to the Wirral and are doing the late or night shifts will base themselves at Bromborough Microbiology labs on Bassendale road for a few hours.

I would like to give a big thank you to Bromborough labs for their hospitality, providing us with tea and coffee whilst we wait for the next call. During each night shift I’ve been riding 100 to 150 miles locally with up to 13 call outs.

I often leave the house on a call and return 5 hours later as I’ll be diverted on different callouts whilst riding between hospitals, labs, and Clatterbridge Cancer Centre.

Different blood bike groups often link together to get samples to other parts of the country, linking up fixed RV points. This allows us to move packages up and down the country swiftly and safely – and at no cost to the NHS. I once received a package at a fixed RV point from a Blood Biker in Wales and handed it over to a White Knights Yorkshire Blood Biker also at a fixed RV point – just short of Leeds who delivered it to the required hospital.

To ensure the safety of the bikers, the controller on duty with you that night will be tracking you on the system to make sure your journey is a safe one and knows exactly where you are, and we report in on a WhatsApp group as a secondary measure when the package is picked up, dropped off and we’re home safe.

I’ve always enjoyed going to these places, I have lots of conversations with the lab technicians and hospital staff on normal day to day life, and I also get the message across to those who are not aware of what we do – some aren’t aware that addition to the riders, we have controllers, management, fundraisers, and speaker teams.

When I was diagnosed with prostate cancer shortly before I joined MCBB, I had radiotherapy and hormone treatment two and a half years ago at Clatterbridge Cancer Centre in Wirral. I came through it with a good result, and I’ll be having regular checks for the condition over the next few years. The staff I’ve met were amazed to see me as a patient and then come back hours later as a blood biker picking up samples!

Doing what I do as a Blood Biker is a way I can payback for the treatment I received, and thanking all the staff who looked after me, from the consultants to domestics. So, if blood bikes are needed, I will cover nights and days, as and when I can. 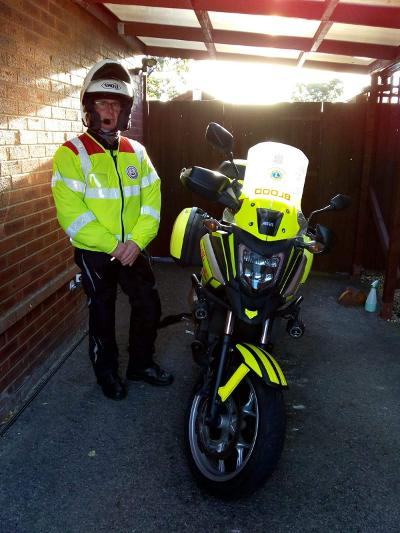