At 24 Rebecca had been driving for several years, so what did she gain from taking the IAM RoadSmart Advanced Driving Course last year? Confidence, more enjoyment out of driving, improved observation skills and tools to aid concentration.

Rebecca was persuaded to take the IAM RoadSmart course by her dad, Paul Owen. Paul is a National Observer and Local Observer Assessor for the Birmingham Advanced Motorcyclist (BAM) and Coventry & Warwickshire Advanced Motorcyclist (CWAM). He also assists at IAM RoadSmart skills days. A retired Detective Superintendent both with the West Midlands Police and National Crime Agency, he holds both driving and riding IAM RoadSmart Advance qualifications.  In addition to supporting the local group to train new joiners, he dedicates his free time to volunteering Warwickshire and Solihull Blood bikes (WSBB), delivering blood and other essentials between local hospitals and assists with their training. 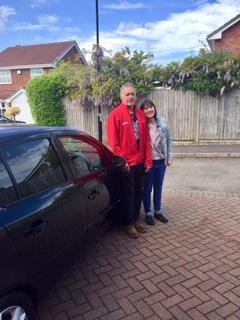 Rebecca passed her driving test in 2019 confirming that at the time she was focused on learning the practical skills and rules of the road to enable her to drive to a standard to pass the qualification and get her licence. The ‘real learning’ starts when you put those skills to use, driving on the road. She didn’t consider she’d need further training after that point.

Working locally in Leamington, prior to taking her Advanced Driving Course Rebecca didn’t really enjoy driving but it was a means to an end. Allowing her to get to work which took about 45 minutes. She would take different routes and alternate her travel time to avoid busy periods. She found the lighter traffic during the pandemic and lockdown made driving easier and was a refreshing change.

In June 2021 when traffic levels were returning to normal Rebecca, persuaded by her dad, to ‘bite the bullet’ and started her IAM RoadSmart course. Rebecca joined her local Solihull Advanced Motorists Group and supported by John Wright, Group Chairman, started her training. Six months later she was assessed by Examiner Clive McNaney and passed.

Through the training, course and support of the local group Rebecca has found a new enjoyment in driving. She’s built on the skills she gained from her DVSA test and has improved on key areas.

She has now built her confidence to a level where she can consider longer journeys that will enable her to visit friends who live several hours away in Hull. Improving her skills so she is no longer hesitant at junctions, and generally brushing up on a variety of topics.

Rebecca revealed ‘talking out loud’, verbalising her route, understanding what she is observing and how she needs to deal with the road ahead has significantly improved concentration levels. Her work routine meant she was very used to her 30-45 mins daily commute and was challenged with the 60–90 minute drive out with John. Initially finding it very tiring but as her confidence and skills grew, she became to enjoy the training.

John Wright said “It was always a great pleasure to go along to Coventry and take Rebecca out for her training. Initially she was hesitant but gradually with patience over the months I was able to change her thinking process about driving and what she could achieve as a result of her efforts. The ‘spoken thought’ or ‘talking out loud’ forms an integral part of the methods used for the Advanced Driving Course.”

John continued “Key elements of the IAM RoadSmart Advanced Driving Course are having a high level of observation and  being able to understand and demonstrate the system of car control we refer to as I.P.S.G.A.  ‘Spoken thoughts’ confirm the level of observation, identifying hazards, planning and being able to talk though what action you are about to take to deal with an ever-changing situation.  This means the thought process must be faster than the speed of the vehicle. The associate must prioritise the hazards and not try to include everything in spoken thoughts otherwise the hazard identification can become historic, and they are talking about what has passed.   Every associate learns at a different rate, so some will pick up the technique of using spoken thoughts more quickly than others.”

Rebecca confirmed she would recommend the course and training to friends who want to build confidence and boost skills in the first few years after passing their test. Rebecca said “The training is different from what you learn for you DVSA driving test. This has expanded my ability and given me the confidence to want to do more. I didn’t really enjoy driving before but it was necessary. Now I feel able to tackle more challenging situations and it’s given me a new level of freedom.”

So, what has Rebecca learnt? Not to be daunted by driving in heavy traffic, busy towns, parking, on motorways, driving at night or on longer distances.

Her top tip which has made the most difference to her driving is vocalising the route and challenges ahead to boost concentration.