Biker Kaz on her Taster Session

It would appear that I am embarking on an Advanced Rider Course. Oo er!

I thought I would do a regular piece as I go along so you can see the whole process and how I am getting on.

I met Ian Souter, who is the Chair of the Milton Keynes section of the IAM RoadSmart formerly known as Institute of Advanced Motorists. Ian asked me if I had ever considered doing an advanced riding course. It is something I had thought about but, like a lot of things, just something I had put off doing.

Ian invited me to have a taster session with him so I could get a feel for what it was all about and learn a bit more about what doing an Advanced Rider Course entailed.

We met one afternoon, parked up and Ian explained to me what IAM was, what it was about, how it was formed and how the process worked. 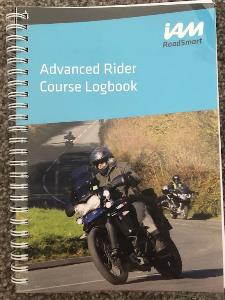 To give a little bit of history to IAM, after WWII a lot of the people that left the army got jobs as police officers, firefighters and ambulance crew. They were handed keys to police cars, fire engines and ambulances having had no formal training of how to drive them. As a result there were a lot of casualties so it was decided to introduce driver training.

People from different areas were consulted such as racing drivers, and a set of guidelines were drawn up, this was known as Road Smart. This developed over the years and in 1956 IAM was formed.


During the course we would work on different areas using the system at the core of advanced riding known as IPSGA :

Ian suggested we go for a ride, he would follow me on his bike to observe my riding and then we’d stop for a chat. I know it’s a few years ago now, but when I did my bike test it was probably one of the most stressful things I have done.

It was a huge relief when I passed my test and I said then that I didn’t want to be tested again!

I was worried about being observed (who wouldn’t be!) but doing an IAM course is something that I have wanted to do for a while, so I took a deep breath, got on my bike and decided to go for it.

We went for a ride and although I knew Ian was behind me, after about a mile I forgot that he was observing me and just started to enjoy the ride.

After about half an hour of riding we parked up. Ian gave me some pointers, said what he thought of my riding. He thought that I was a good rider (phew!) and I was obviously happy and confident on the bike.

I do need to allow more room when passing parked cars. To make allowance for doors flying open and to give bicycles a wider berth.

When going into a corner I change gear, brake and position myself in the road correctly but just a bit too late. Ian would like to work on me doing all those things earlier so I am smoother into the corner and faster coming out. I definitely like the idea of that.

We then got back on the bikes, and I followed Ian back to our starting point so I could see his road positioning and the way he rides etc.

We had another chat and I said I was really pleased with how the session had gone, it wasn’t anywhere near as stressful as I thought it would be and that I would like to do the course.

My course is now booked. I will be having regular ride outs sessions with Ian, and I will keep you posted with how the course is going.