This is Phil's second lead in a matter of weeks, a new leader to the front as 10 riders grouped for a brief of a ride partly : Paul Rushton's, part Phil's amended bits, as we lined up at a busy exit point at Squires ( letting the TD Ride depart first ) we did a left out of the gate and headed to the A1 for a short run North to the Collingham Exit, going left ,Left, Left before a Right and the long straightish road to Harewood, a good pace being kept  with little marking needed, At the Traffic Lights at Harewood, Dave Mitchell said he was peeling off to go to Cob & Jagger Triumph in Shipley ( not to change bikes again, but to replace a lost bolt holding his screen on ) so it was now down to 9.

Down Harewood bank and over the river Wharfe before a Left onto Tight Twisty B & C Roads ( the grass in the middle was not denoting a duel carriageway ) to Weeton, Huby, Leathley, and over ( what is usually a Gated Road ) Cinder Lane, before picking up the B6451 route at Lindley Wood reservoir and along passed the Sun Inn ( empty at this early hour ) to cross the A59, again good grouping up at junctions kept the group nicely together, onwards passed the back of Menwith Hill to Darley for a Right and Right back toward Menwith Hill ( does this count as a U TURN ??) then a left to Burstwith and up to Shaw Mills and another fine twisty route passing the funny named 'Careless House' to Risplith and the G&T Ice Cream Parlour ( I had a Latte, a little early for G&T's ) and the T&P Stop, a route enjoyed by everyone as a part 1 of the ride. 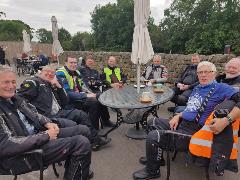 Team Piccy taken ( I usually forget ) and 3 more riders electing to depart at this stage left 6 to venture further North ( It was fine and warm so no danger ) we mounted up at hit the B6265 toward Glasshouses for a Right over the tops to Laverton and Kirby Malzeard, Masham and over to Halfpenny House and Newton Le Willows to cross the A684 toward Catterick, but turning left toward Barden Moor then a right for Reith, going on some interesting roads that have been rutted through subsidence, ( that just concentrates the mind a little ) before arriving at the Dales Cycle shop on the outskirts of Reith, for an excellent lunch after a fabulous ride in lovely weather. After lunch the group split, a couple heading off shopping to Altberg's in Richmond, Myself to Redmire to visit friends, Phil and Steve heading off for Pud at Brymor's via a twisty route, Thanks to Phil for a great ride out and all T5 for turning up.
The route: 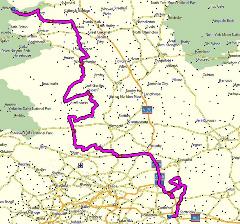