Nothing quite like leading an OD ride at the end of August, and the forecast was Very different from the previous weekend, and having to follow Alan's ride to Sutton Bank last Saturday (he always comes up with an interesting routing).
But as it panned out it went okay and as Dora the Explorer said on the day... if you do go off your intended route "Nobody will notice", well sadly for me some of our group did!

I did manage to do a recce midweek as it's always handy to know of any closed roads, roadworks and the like that could catch you out on the day.  It turned out that a major bottle neck at Collingham was going to put a spanner in the works in the shape of a three way traffic light set up, and a road closure, but all was not lost, however, an alternative route would work wonders on the day.


The destination for my lead was Brymor Ice Cream, with a T&P at the Route A59 Cafe, timing wise is really dependant on traffic and the volume of those groups of cyclists who always seem to travel in 3's at the most inappropriate moment.  After the usual briefing and lucky for me Tim volunteered to do the back marker duties we, (10 x T5) headed out of Squires turning left and over the A1 to the Great North Road, to Aberford and left after Bramham to East Rigton.  Right onto the A58 to take us to Collingham and to where I expected a log jam but diddly squat and we sailed through, a quick left and a right to take us passed the road closed sign to Linton.  From there to Sicklinghall, Netherby across the A61 and a quick left, right to North Rigton heading to Stainburn and Newall.

After Newall the mandatory cyclists appeared in increasing frequency, but can only guess that these groups grumpiness increased as each of us appeared on their hallowed ground.  A burst water main at Cockpit Farm could have qualified for "fording" but not in Paul Rushton's eyes!  Anyway 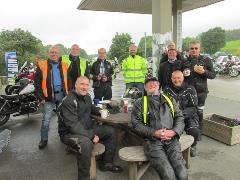 progressing (I just love that word) via Ilkley Golf Club, no wayward golf balls encountered thankfully on this occasion, finally arriving at the Route A59 Cafe just in time as the drizzle started.

T&P completed (and the damp conditions continued) two of our group departed, Alan for White Knight duties and Don also with other commitments, the balance of the group headed back toward Bolton Abbey (a possible U turn then) towards Burnsal, Kilnsey, Buckden at which point the SatNav gave up the ghost, oh well it was a straight forward route and low, a familiar route to Wensley and a right to Middleham and onwards to Brymor (a highlight of the ride) during which another highlight of the ride was an AMG Merc's cornering proved bhp isn't everything.

Thank you to T5 members on the ride and though for some it may well have seemed like a trip down memory lane and a missed opportunity of favourites on the way, and to Tim of course despite having a pile of house work ahead of him on Sunday.  It is interesting for me as I am taking more on board on other rides whereas before I'd be a fully signed up member of the WTFAW tribe :-) 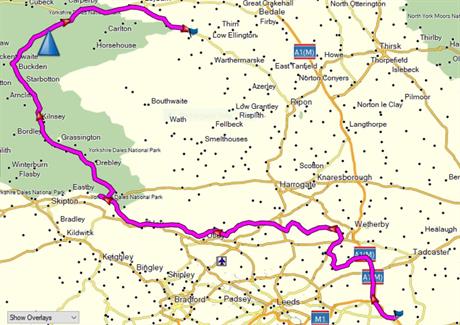