Today's ride would be lead by Paul Rushton. Paul had a cunning plan. He needed to collect a pair of boots from Altberg in Richmond; a fantastic family run boot maker, making boots for the police, walkers, military, and of course us biking folk. Definitely worth a look in when you're next in need of new boots.

Paul explained in his briefing that we would head to the York Glider Club for our T&P stop, and from there onto Manor Cafe. Now, Paul is well known for his 'not as the crow would fly' type of route, favouring the 'as the ferret moves' types. Just as you think he's making a B-line for somewhere, off he'll dart usually down a lane not much wider than the GS handle bars. However, this usually comes out onto some brilliant bits of tarmac somewhere or other, and is usually testing and a whole lot of fun!

We turned left out of Squire's, and headed through Micklefield, Aberford, left on Cattle lane to Barwick and through Scholes (which I have heard is home to some fantastic riders). From here, the back roads to Knaresborough and onto the B6165 to Ripley, with a right turn just past Ripley Castle heading up towards Studley Park. Some great roads around this area, but the roads were still wet and muddy from Friday's down pour, meaning a steady pace was required.

I was second man at this point, and checking my mirrors I could see that a large gap was opening up behind. Paul had obviously spotted the same thing, and decided to pull up and wait for the others to catch up. (Taking note myself, as I thought back to my lead the previous week.. whoops). It wasn't long before the rest of the group came into view, so we folded up our deck chairs, put the flask and sandwiches back in the back box and off we went. 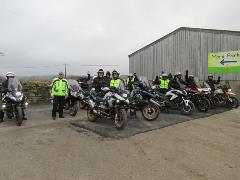 After a few more miles, as we entered the village of Risplith, Paul pulled in at the G&T Cafe and Ice cream shop. ''Thought we were stopping at the glider club?'' came a cry. ''Leader's privilege!'' scoffed Paul. No one minded though, it's a great cafe and the owners have kindly tarmacked part of the gravel car park for us. Just enough space for about 10 bikes- how kind!

All refreshed, we set off on the charge to Manor Cafe. We headed across the hills through Kirby Malzeard and Grewlthorpe, snaking our way onto Masham. From here, a challenging little road that headed up towards the Wensleydale Railway. I think I over took Wallace and Gromit in their side car! We then carried on up above Leyburn to eventually pick up the A6108 and the short blast to our destination. Manor Cafe- always good grub and friendly staff. 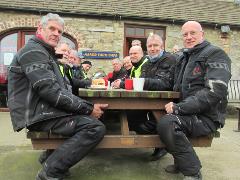 An excellent ride with grins all around.
Thanks Paul, and to Alan Riddington for back marking. 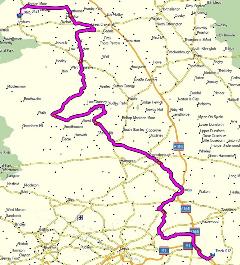