Bear with me – a blog about Canada

I’ve just got back from two weeks in Canada where I learned an interesting fact: the technique used by the indigenous Squamish and Lil’wat tribespeople for tanning a moose’s hide was to soak the hide in the moose’s own brain.

This same technique could be used for other species too because, as a general rule, “every animal has enough brains to tan its own hide”. So I was informed by a young chap named Redmond, our guide at an excellent cultural exhibition, and I have no reason to doubt it.

Hopefully you’re not too squeamish, or you’ve managed to put that image out of your own brain for now, in which case thank you for reading on. It was a long trip and there’s loads I could say, so I’ll continue in a similar vein and distil my trip into a series of interesting facts … OK, let’s call them observations. And I’ll try and stick to the subject of motoring. After all, that’s why you’re here, plus I did cover 3,227km across the Rockies so there’s plenty to talk about on that front. 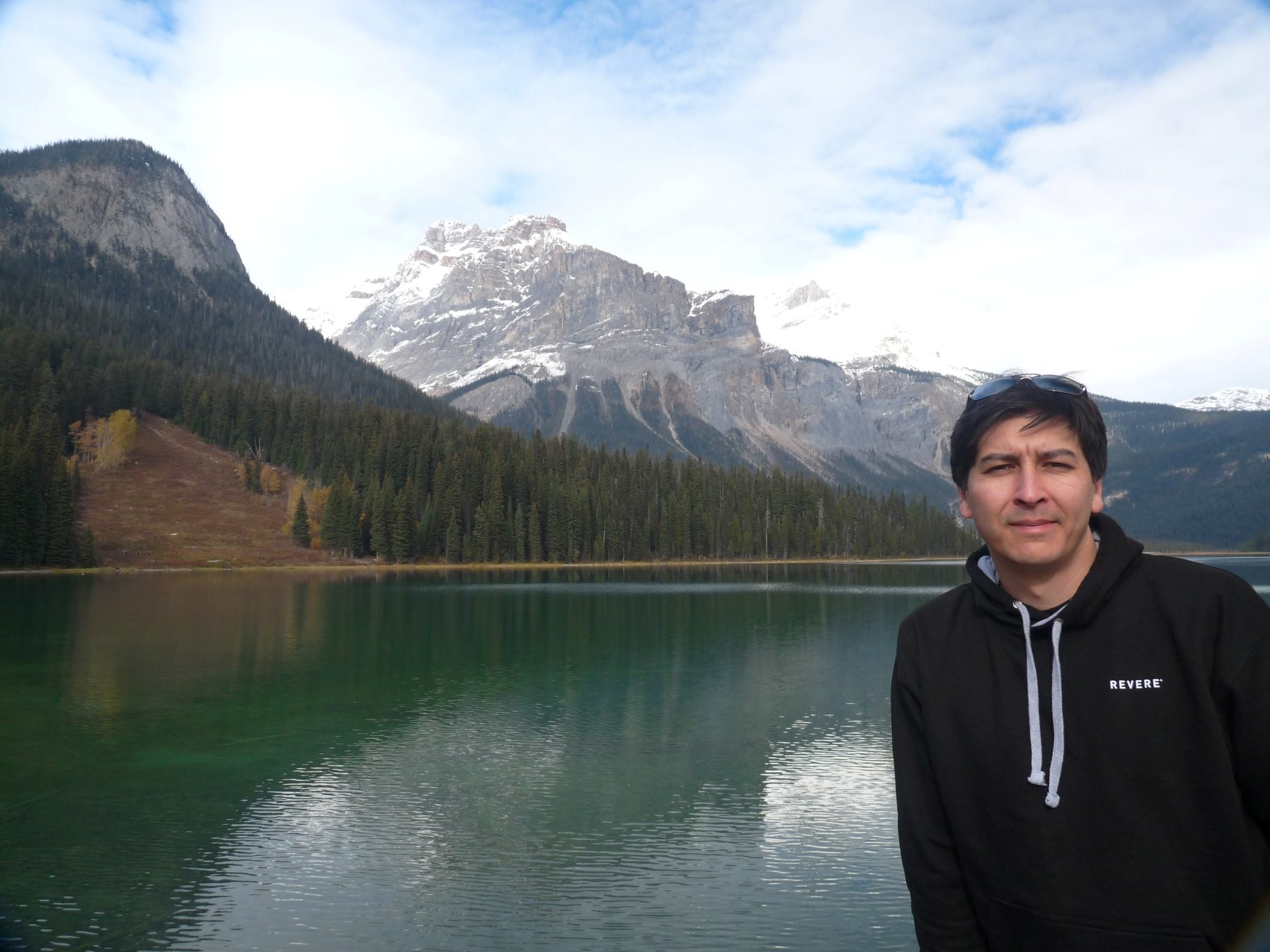 My first observation was that our hire car had no front number plate. Or is it a ‘licence plate’? In a mild panic we raised this with the lady at the desk, who informed us that our car had originally been registered in Alberta, where a front plate isn’t required. This was in British Columbia, where a front plate is required, so I don’t think it was a totally lame question but we were made to feel like ignorant tourists right at the outset of day one, which was nice.

In Canada, whenever you venture out of town and head up towards the mountains, it’s very common to see a large sign informing you that, in order to use the highway, your car must be equipped with winter tyres between 1 October and 31 March. 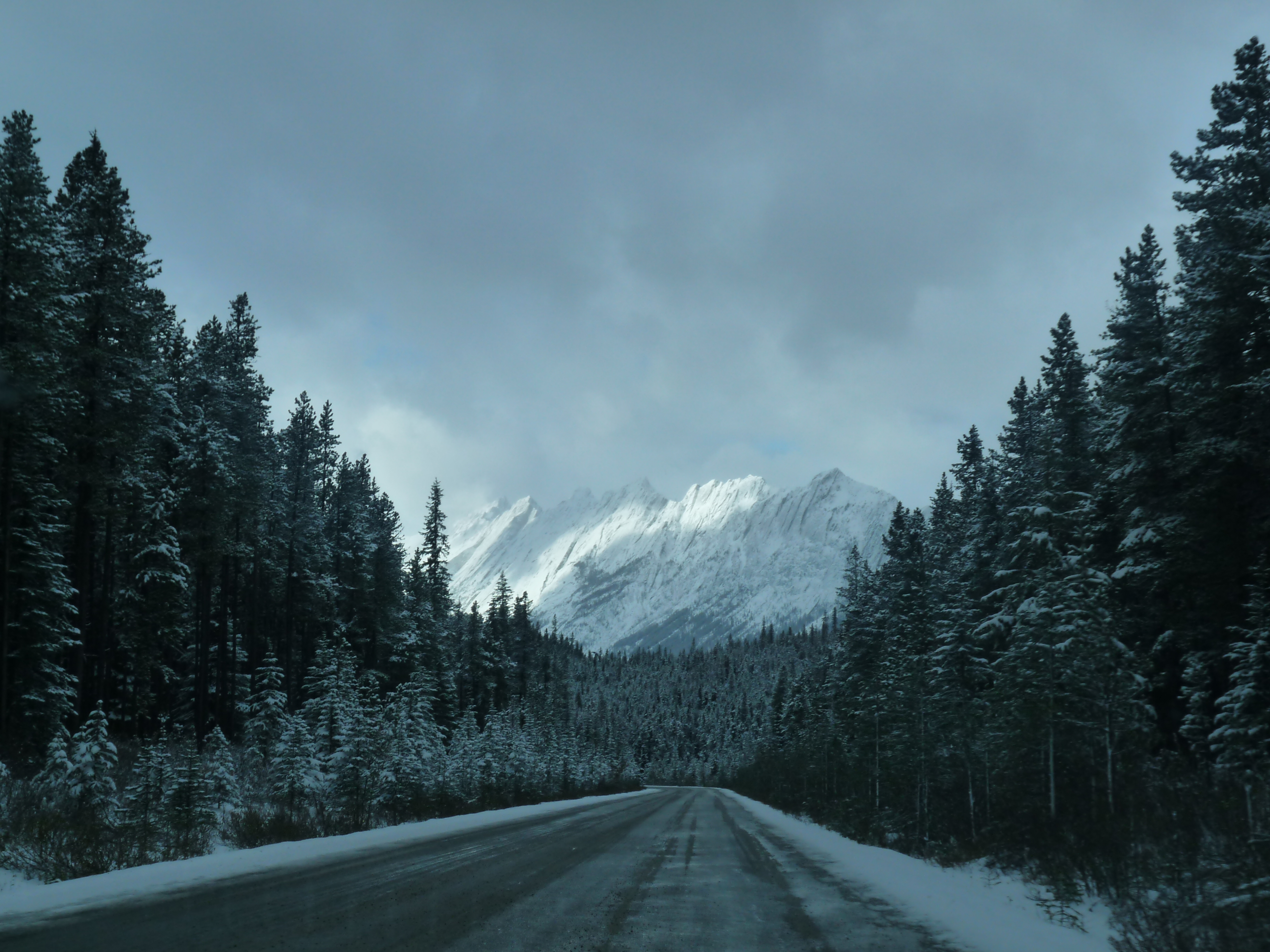 Large trucks must carry snow chains during this period. This was initially a worry for us as we’d arrived on 8 October and our hire car, a Chevrolet Sonic (a surprisingly good little ‘sub-compact’ that you might know as the Aveo) was not so equipped. Thankfully, apart from a light dusting of snow here and there, the weather conditions were generally mild, dry and not too cold in mid-October’s ‘shoulder season’.

Canadian motorists seem a lot better prepared than we are in the UK. You might have seen those ‘meanwhile in Canada…’ memes; it wasn’t quite like that but I can imagine it gets a good deal more treacherous as the weather gets colder, and quite a lot of private cars were already emitting the trademark rasp of studded tyres as they rolled by. Radio campaigns and matrix signs urged motorists to “SHIFT INTO WINTER.”

Something else I learned from a radio ad: some tyre manufacturers lace their tread compounds with crushed walnut shells for better grip in snow and ice. Nuts.

The highways in Canada are generally VERY nice. This is especially true of the snaking, swooping mountain roads which offer a mixture of stunning scenery, smooth surfacing, serene solitude and probably other things beginning with ‘s’. It was on these roads that I missed having the fun and control of a manual gearbox. However, automatic transmission is the norm in Canada and does make it a little easier for a Brit to adapt to left-hand drive, so I was satisfied to settle for the Sonic’s slow-shifting six-speed slush box (try saying that when you’re sober).

Autumn (or ‘the fall’, if you will) seems to be peak time for major resurfacing works throughout the national parks. Every day, at least twice a day, we were halted by major roadworks. I would imagine that this is intended to avoid peak tourist season and prepare for winter. We never saw any surface dressing or pothole patching: just miles of fresh, thick, pristine rolled asphalt. It must cost a fortune but I’m sure it’s worth it, as the roads really are the lifeblood of the small towns, and they must get a hammering from the snow chains and studded tyres.

Interestingly, there are a lot of women involved in road maintenance in Canada. Almost every crew we saw included at least two or three women, usually with the job of managing the traffic, and occasionally pulling over motorists who speed through the works. On that subject, the minimum fine for speeding through roadworks is $196. No, not $200 and no, I don’t know why they don’t round it up.

Another source of the occasional long wait: freight trains. These trains can sometimes be over two miles long and take an age to pass through a level crossing. As it is, a huge amount of freight is transported by road in gigantic lorries, so you can’t moan too much about waiting at level crossings when you consider just how many more gigantic lorries there would be on the road if it wasn’t for the railways.

Speaking of gigantic vehicles: pickup trucks are extremely popular in Canada. I’m talking about massive, Land Rover-dwarfing, V8-engined behemoths; the like of which you’d struggle to thread through a UK city.

The latest models seem to be the largest on offer yet. A huge, vertical, wall-like chrome grille seems to be essential to the styling with Ford, Chevrolet, Dodge and GMC apparently competing to be the biggest, baddest, bluffest and blingy-est (and probably other things beginning with ‘b’). There’s almost a complete absence of any European cars outside of the city.

Some Japanese brands are popular though, especially Toyota who appear to have followed suit with the US brands and started producing some serious-looking large off-road trucks now. I’m not convinced that these kinds of vehicles are necessary for the majority of their owners, but I suppose the four-wheel-drive and huge ground clearance offer some feeling of reassurance in the winter months, and their overall height and bulk no doubt offer some protection in the event that you collide with a moose or other large animal.

On the subject of wildlife we really wanted to see a bear, and spent as much time as possible driving very slowly through wooded areas in the hope of seeing one. Despite passing a lot of road signs warning of bears, as well as moose, wolves, beavers and bighorn sheep we were deprived of any sightings of Canada’s more celebrated fauna, and had to settle for the occasional squirrel and a brief encounter with a family of caribou.

Perhaps the bears were all making their final preparations for hibernation rather than coming out to play. The national parks are very keen to keep the animals safe, and road casualties are sadly quite common, especially during high season.

So what about the driving standards? I noticed a couple of behaviours that seem fairly prevalent in Canada. The first is driving at 10kph over the posted speed limit. It’s almost obligatory.

Understandable perhaps, given how long, wide and traffic-free the roads tend to be, and that this approach is often the only way to stay ahead of articulated lorries which generally travel a lot faster than you might expect on the flat, before slowing down to a crawl on the steep bits. I don’t want to sound like I’m an expert on the Canadian psyche after spending only two weeks there but it’s clearly ‘a thing’: one of the road safety campaigns on the radio encouraged drivers to consider how their stopping distance might be affected by driving 10kph over.

What’s harder to understand is the tailgating. Or perhaps I should call it ‘convoy driving’. Canada has thousands of miles of wonderfully empty roads, and yet so many motorists seem to enjoy cruising two car lengths from the vehicle in front, rather than overtake (for example when the car in front is dawdling at only 9kph over the posted limit) or drop back to a more comfortable distance. It doesn’t seem to bother anyone that much, but I found it rather odd, and did worry about what would happen if I had to brake for a hapless moose.

Returning to Vancouver for a couple of days at the end of the trip was a shock to the system. The traffic there is horrendous. The road layout in the city centre is largely the common transatlantic grid pattern, with every journey consisting of short bursts of frantic acceleration, lane changing and braking, between a string of intersections that all look the same to the untrained eye.

I’ll end with one final observation. No, actually this one is an indisputable fact: Vancouver police cars are the coolest in the world. The current patrol car of choice is a Dodge Charger with comic-book paint job and massive bull bars that look perfect for a zombie apocalypse. Google it. They look awesome.