The 'Beast of the East' at large in the west

Tuesday and Wednesday saw me working in Dolgellau in the heart of Snowdonia.  Home these days is near Presteigne, on the England/Wales border. The trip’s 70 miles or so, depending on the route you take, but all of them involve hills – not gentle rolling slopes, but big, steep sided mounts where the roads have to zig-zag up one side and down the other.

The “Beast of the East” was headline news and although red weather warnings were in place for South Wales, they were well to the south of my intended route. Nevertheless, I have given advice countless times on what to do if there’s a risk of getting stranded in snow, much of it taken from an extreme weather survival course I attended many years ago in Aberdeen. Could I follow my own advice, and does it work?

My first recommendation is to have emergency supplies in the car, just in case. A local shop provided two BIG bars of chocolate (kept in the boot, out of temptation), bottled water, a few sandwiches and crisps. Already on board were several coats and jumpers, boots, hi-viz waistcoat and a woolly hat; the fuel tank was almost full. Staying in touch is also an essential, so the phone was plugged in to keep it charged and although I wouldn’t answer any calls on the move, the dash display told me whether I had a signal; coverage is scant in many places between the towns. After calling my wife to tell her my route and making sure the radio was set to receive traffic news, I set off.

The roads through the mountains of Gwynedd were relatively clear, with the easterly wind blowing occasional drifts across the road. Since I was heading south, the drifts tended to be on my side of the carriageway, but it was good going, and, while the roads demanded concentration, the sight of the snow-covered peaks was breathtaking.

About 3pm I entered Powys – back in my own county, but still with some challenging hills between me and home. Although no travel bulletins had mentioned any problems on my route; snow was covering the roads and was quite thick where it had drifted from the fields, but still driveable. From Crossgates I had just 15 miles to go, but there’s a choice of roads to follow. Still no mention on the radio of any problems in Powys, but my advice is always to stick to the main roads as far as possible, even if it’s a longer journey. I could continue on the A44, a primary route, marked green on the maps or I could take the A488 from Pen y Bont, a main road shown in red. I figured that the snow ploughs would keep the primary route clear before the main roads, so the A44 it was. 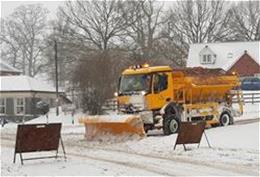 East of Pen y Bont, the roads were snow covered and gritters were out in force, but then came the high, steep hills through the Radnor Forest. As soon as the road started to climb it was obvious that conditions were getting much worse. Time to give up and stop for the night. My priorities now were getting off the road if possible and letting my wife know that I was safe, but not going to make it home.

A phone box on the left suggested a lay-by and I still had a strong mobile phone signal, so that was the spot to stop. Carrying on only risked being stuck on the main carriageway, and quite possibly with no way of contacting anyone. After a few minutes a snow plough came down the road and confirmed that the road ahead was impassable. Making a U-turn turned out not to be an option; the snow was deepening rapidly because of the wind, and my rear wheel drive car with lots of gadgets and technology is fabulous for normal driving, but no match for mother nature in combative mood. After checking that it was indeed a lay-by, and giving my wife the bad news, I got the car as far from the carriageway as possible.

Llandegley was not far back – was it worth trying to walk there? Emphatically NO! My advice has always been that the car gives shelter, warmth and it’s where rescuers will look for you. A village you remember driving through just a minute ago is almost certainly much further than you think and with snow blowing wildly now, even following the road would be a challenge. Unless a safer option came along, the car was my refuge for the night. Fortunately, the angle of the wind was keeping the back of the car completely snow free, so the exhaust pipes were in no danger of blocking or leaking fumes into the car. That meant I could run the engine to keep the heater warm as much as I needed, although I would keep checking; fumes can be lethal if they get into the cabin because they can’t escape normally. If snow is thick under the car or covers the tailpipe, run the engine for a maximum of 15 minutes in every hour, then switch off to let any fumes clear. 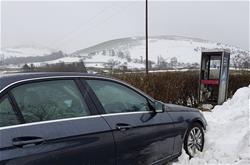 Out of the carriageway, warm, chocolate for sustenance, a working phone and plenty of water; I’d be fine.

A police Land Rover struggled by after an hour or so; the officer was on his way to a lorry reported to be jack-knifed, but stopped to check I was OK. He confirmed that the road was completely impassable, agreed that I was safe for now, but told me not to hesitate to dial 999 if I needed to. At least now the authorities knew where I was and I prepared to settle down for the night – the car radio and a Kindle would help pass the time.

As luck would have it, the police Land Rover re-appeared after another hour; the lorry turned out to be a false alarm, but even the Landy had got bogged down and a local farmer had helped out with a tractor. 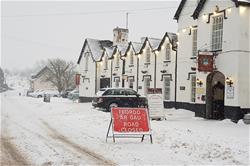 This time, the officer offered me a lift back to Pen y Bont.  Well, that was my safer option, so I grabbed my bag and jumped in. The Severn Arms in Pen y Bont turns out to have welcoming hosts, a room for the night, a big log fire and my favourite Irish stout; an excellent end to the evening.

There’s also a council depot in Pen y Bont and they are going to let me know when the road is cleared as far as my car; otherwise, it’s safe and so am I. Thanks to Dyfed Powys Police, the workers of Powys Council and the hosts at the Severn Arms, I’m warm, sheltered and well placed to hang on here until it’s safe to get home.

More importantly, I had shown that following the advice I’ve been giving over the years works; take supplies, listen to the traffic news, stick to the main roads and if it’s obvious you’re not going to get through, find somewhere secure to pull up while you still have options. It’s definitely the way to stay as safe as possible until help arrives.

To find out what essential items you should be carrying in your vehicle all year around, click here.