On June 25th, 2021, The Adventure Bikes Riders Festival (ABRF) 2021 opened its doors for the first time in two years to 7,000 bikers at Ragley Hall in Warwickshire.

During the festival we offered individuals the chance to ride out with one of our members, explore the local Warwickshire area and pick up some new tips. These sessions which ran throughout the weekend were very popular with visitors pre-booking from Friday onwards. All excellent routes for the rides, designed by Mike Richardson of Redditch Advanced Motorcycles Group. Mike deserves a very big thank you for completing this task. Although 20 minutes in length they were challenging and scenic in an extremely pretty part of the Country. Links to the routes can be found at the bottom of this article.

This year the local groups teamed up with the Area Service Delivery Team, Peter Serhatlic, Robbie Downing, Pete Doherty, Steve Ellis, Scott Tulip, and Kim Tulip due to the increased size and popularity of the festival since 2019. Amy Curry, Head of Project Management and Business Systems came down on Friday to set the team up with a new payment system. Gordon Clelland, Operations Support & IT Director was also there on Friday morning to support the team and iron out any issues.

Stuart Donald, QPM, IAM RoadSmart chairman also came along on Saturday to see the team. Stuart was attending the festival as a visitor and is a member of the Hull & East Riding Advanced Motorcyclists Group (HERAM).

The festival offered lots to see and do with queues of enthusiastic visitors clamouring to try the latest machines, technology, attend talks, eat, and relax. Despite not having a central spot, joining the ranks of emergency services and other charitable organisations, we managed to attract and share our passion with several visitors.

Peter Serhatlic said: “It was my first time at the event, which had a real festival feel. The observed rides and welcoming people to come and chat with us helped us embrace the atmosphere. Visitors were spoilt for choice with things to do and explore during the event. We attracted over 50 new members during the festival and completed around 70 rides with enthusiastic bikers. We also met lots of existing members which was great.”

He continued “Enquires came from young and old, riders who wanted to do a course to enable them to become blood bikers, family members who were encouraged to join groups near to them and many couples. It was great to see everyone and the weather held for the three days. It was also great to have support from HQ and we also greeted Stuart Donald, QPM, our chairman, who was attending the festival as a visitor and popped along to say hello.”

One visitor to the stand Mark Ansley, came to meet Pete Doherty who he’d recently supported by taking out journalist, John Urry in Peterborough. Mark got a pleasant surprise meeting Heather Butcher, PR & Communications Lead from Head Office who he’d also been speaking too and who came down to see the event.

Mark confirmed that he visited the show last in 2019, as it didn’t happen last year, and it was much busier. Many more people came out which was great to see.

The festival was a great success and one to add to the calendar for next year!

The full list of volunteers and special thanks goes out to: Team Picture Below.

A nice couple of hours riding around rural Warwickshire on excellent roads. Four routes for you to try out at your leisure. As My Route app wasn't available at the time you can now view the below via Google Maps. 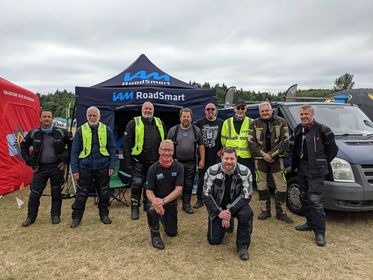