Isle of Wight and beyond

When we started planning our trip to the Isle of Wight, I was more focused on making sure we had everything for the trip (sun tents, towels, the list goes on…), forgetting that the charge on the car would be vital.

Travelling with three adults and three children, the children all aged 5 and under, across two cars, one being a Polestar 2, a fully electric car that claims to achieve 341 miles on a single charge, and the other being a petrol (and at times fuel guzzling) Audi S3, so it was the perfect trip to really test the Polestar’s battery claims and see the true savings between petrol and electric.

Filling up the Audi S3 with petrol priced at £1.67 per litre, costing around £70, and charging the Polestar 2 on a Hypervolt home charger costing between £20-25 is already a big saving before the trip had begun.

We had already planned to drive to Hampshire the day before to stay with family, so we didn’t need to leave quite so early the following morning to catch the ferry from Southampton – making life a lot easier when travelling with young children.

So, on a sunny Thursday lunchtime and with a fully charged battery we knew that no matter the traffic on the M25 and M3, we were sure to be fine. Like many electric cars, the Polestar 2 tells you an estimated battery life when following Google Maps – this really helps with that range anxiety, simply knowing it’s highly unlikely you’ll have to stop at a service station to charge, adding even more time to your journey.

We’ve made the same journey to Hampshire hundreds of times over the years, yet many people will already know that the M25 and M3 are incredibly unpredictable – it should take 1 hour 15 mins, all of 60 miles, but it’s taken 4 hours before. 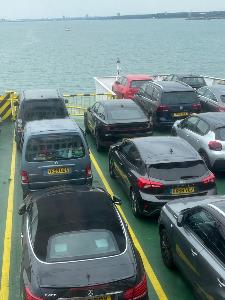 We arrived in Hampshire with 83% battery, not bad for a journey that ended up taking 2 hours with the air conditioning on full blast, and the Audi S3 was on three-quarters of a tank of petrol. Being new to electric driving and unfamiliar with the charging infrastructure, we felt it was best to charge the Polestar back to 100% overnight from the regular mains socket (something that’s only recommended if done temporarily). It took 7 hours to reach 100% from the mains socket – eyewatering when you think how long it takes to fill up a regular petrol or diesel engine.

We could see on Zap-Map that the Isle of Wight has lots of charging points, yet only four charging points supplied a maximum of 50kW. This meant it could be a lengthy stay to charge the car enough to get home, so it was a good job we made the pitstop in Hampshire.

Boarding the ferry at Southampton, the Polestar sat at 93% battery and the Audi S3 sat at over half a tank. It’s worth pointing out that the Polestar was in fact more expensive to board the ferry, compared to the Audi – for reasons unknown to me.

Arriving in Cowes on the Isle of Wight, we made the short journey (15 miles) to St Helens, close to where we were staying. As the Isle of Wight is only 13.5 miles from north to south, the battery life wasn’t going to be tested too much but we did have the air conditioning on full blast for every journey. The Polestar’s air conditioning turns off when it senses no weight on the driver’s seat, great for energy saving but not ideal when you want to cool the car down before getting your children into their car seats.

We made quite a few short journeys over the course of 4 days, visiting different beaches and tourist attractions, and we only chose to charge the car once for 20 mins on a visit to Tesco Extra – charging the car a further 3%.

On the last day of our holiday, we travelled back to Cowes to board the ferry to Southampton, at this point the Polestar sat at 73% and the Audi S3 was on half a tank of petrol. The motion of the ferry set off the Polestar’s alarm system, and then it was soon followed by a few other cars around it.

Leaving the ferry at Southampton, the Polestar estimated the car would be on 28% battery by the time we arrived back in Welwyn Garden City – a 96-mile journey. It was 16:00 on a Monday afternoon by the time we left Southampton so we knew the traffic could be troublesome. It took a further 40 minutes due to rush-hour traffic to arrive home, and even with a detour we arrived home with 34% battery and the Audi S3 greeted us home with it’s red petrol light.

A few years ago, I would’ve been extremely hesitant travelling long distances with an electric car, but the technology has really advanced. The Polestar 2 is a comfortable, intelligent, and extremely enjoyable car to drive – and the battery life lived up to everything we hoped it would be. In total it cost around £30 to charge the Polestar from its initial home charge and then again on the home socket plug, compared to the £70 the Audi S3 charged to fill.

Not only was the electric car more cost effective, but it’s also much kinder to the environment - it’s a yes from me!

By Emma Mitchell, PR and Communications Manager at IAM RoadSmart