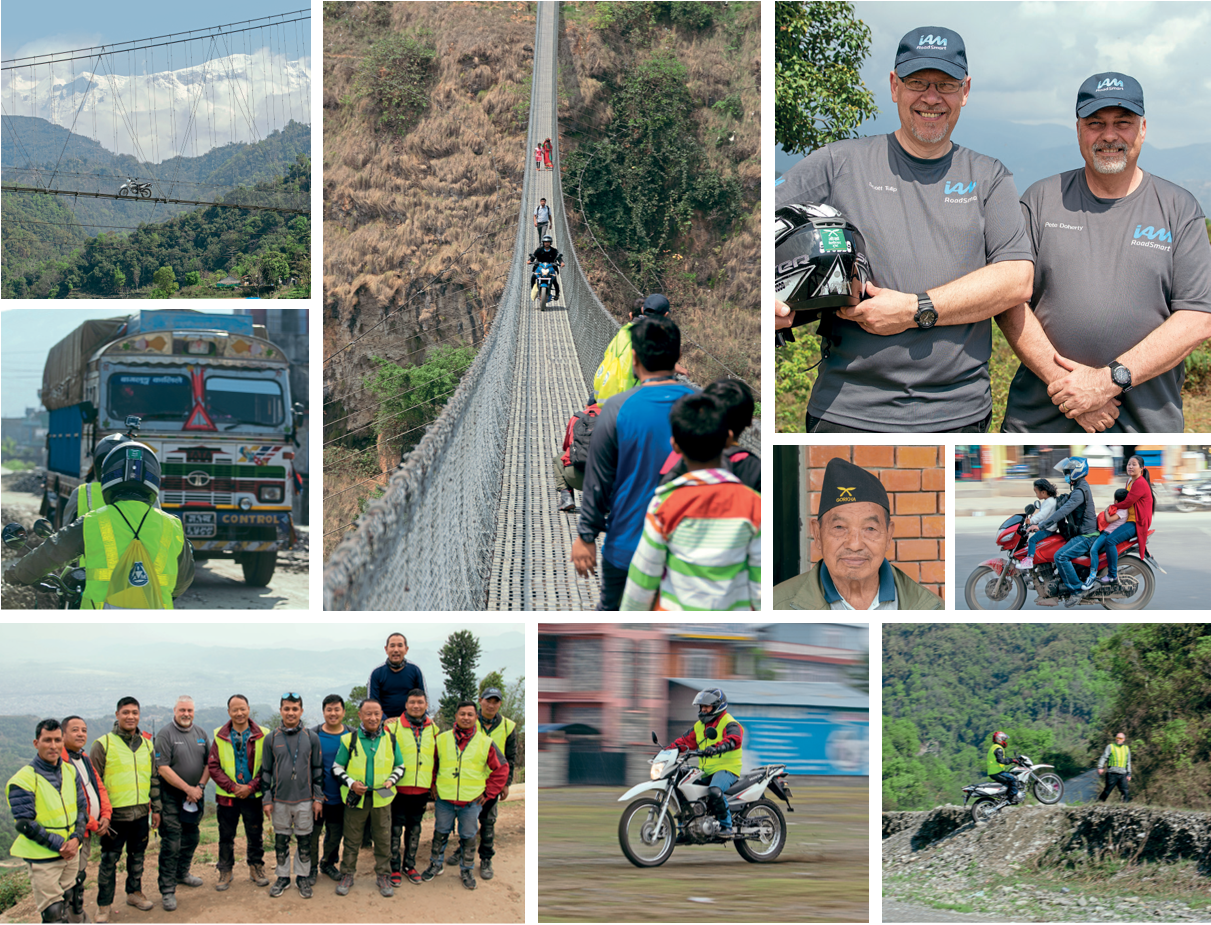 What do you get when you take a bunch of Nepalese riders and a couple of IAM RoadSmart trainers? The only trained bikers in the country, that’s what!

My phone rang. It was Pete Doherty who has been a good friend for many years. We worked together for 10 years as instructors on the motorcycle wing at the Metropolitan Police Driving School. We’ve both been IAM RoadSmart examiners for over a decade, and we're full-time IAM employees as Area Service Delivery Managers. So you could say we know each other well. It’s not uncommon for us to enjoy a little bit of ‘banter’ and the occasional wind-up. We have learnt the signs of when a wind-up is coming: our lips move. The day I heard about our Nepal trip was no different. Pete called and asked me if I was up for a work trip to Nepal. I laughed it off as I was confident this was another one of his pranks.

Finally I realised this was actually happening, and he went on to explain that we were to deliver off-road motorcycle training to The Gurkha Welfare Trust on behalf of IAM RoadSmart. Once it had sunk in that I was finally travelling to a place I’d always wanted to visit, I quickly put together a list of essentials for the trip. Small helmet mounted camera: check. A large lens to aid my photography habit: check. Sun cream to manage the heat: check. Space in my luggage to bring back gifts for the family: debatable.

We landed at Kathmandu at about 9am, and outside the heat was already stifling. As soon as we arrived at the Bagrati Welfare Centre, Pim (an ex-Gurkha) took us to meet the chief of staff at the GWT Area Welfare Centre (AWC) in the city centre. These centres are the regional bases of operations throughout Nepal.

Dependants (including widows and children) come here to socialise, get medical assistance and help filling in forms; a wide range of services are available. The GWT has a huge outreach programme and engages with villages for projects such as water supplies and building new bridges. It costs about £60m per year to run. The UK Government contributes £2.4m and the shortfall is made up from private and public donations in the UK. At the centre, it was striking to witness how the chaos of the city suddenly stops as soon as you turn into a side road. We sat drinking a cup of tea and couldn’t hear a note of the cacophony we had left just 100 yards away. Later that afternoon, we would be going out for a ride in the city traffic to experience the roads of Nepal. 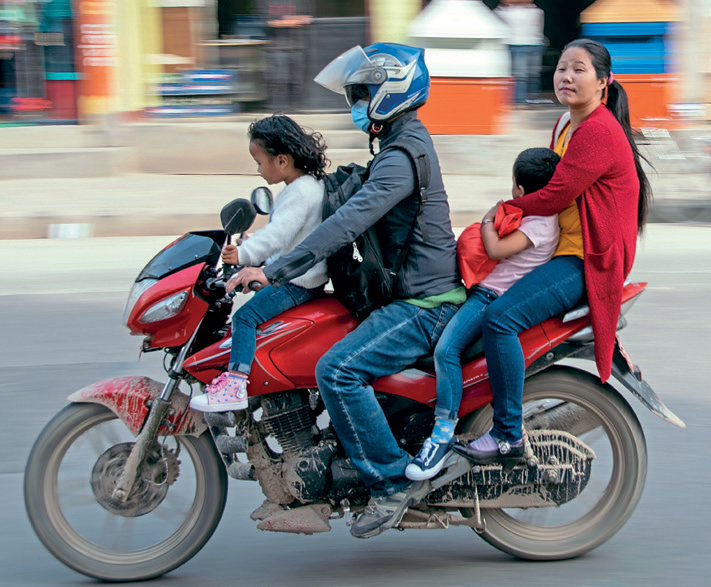 The way to decide whether an overtake is safe or not is simple: just do it. A return gap is always there; you just pull in and create it. If you meet another vehicle, just brake and they will move or stop. Overtaking can be carried out to either the nearside or the offside. But even if you overtake on the nearside you have to watch out for oncoming traffic.

To turn right on to a main road is as awkward as it is in the UK. You need a gap in the traffic before you pull out. Nepal simplifies it a bit by not actually needing a gap in the traffic from your left. Just turn right into oncoming traffic then – you guessed it – sound your horn, create your gap and drop into the traffic line that is (mostly) heading your way. This technique is used by every vehicle from scooters up to the huge, heavy TATA trucks that are plentiful. After a while, though, it sort of made sense; all of this madness contains no malice. People will always make room for you – they even sound their horn to let you know.

The next morning we met the group of workers we’d be training and then set off on the journey to Pokhara, which is about 200km. We were wondering which bikes we’d be given. We imagined it would be something made in the region, such as Hero or Royal Enfield. The latest ‘Himalayan’ model, perhaps? We then discovered they would be Honda XR150Ls. I’m 6-foot plus, and the wrong side of 14 stone. Pete is the wrong side of both. I think we’ll need two each: one per bum cheek!

We had a total of 12 students, which was a challenge, but manageable. We provided all students with a bright yellow drawstring backpack which included a neck-scarf, pens, stickers, lanyards, some other [IAM RoadSmart branded!] goodies and a simplified version of our advanced riding handbook.

We would be teaching them methods of riding to a system, colloquially known as IPSGA, which those readers who have done some advanced training will (hopefully) recognise. For those that haven’t done any post-test training it is an acronym for:
Information, Position, Speed, Gear, Acceleration

It works. Take IAM RoadSmart’s advanced rider course and find out for yourself. It also works in our off-road context, with a few extra techniques to help ride over rough ground.

The end of the road?

A large unknown was the ‘base level’ of the riders and we wouldn’t know that until we’d seen for ourselves but again, the standard required to pass the driving test in Nepal is greatly different to our usual expectations. We had been told that many of our students were experienced cross-country motorcyclists, so we could potentially have had anything up to a budding Dougie Lampkin in the group.

After riding for about eight hours, fatigue was setting in and the group was starting to get strung out. Then the road ended. Just stopped. Ahead was a cloud of dust. I realised this was part of a road under construction. The Tarmac stopped and we were riding on the unmade aggregate laid as a base. In the middle of the road was a long line of piles of finer aggregate waiting to be laid prior to the Tarmac. The dust was awful; visibility was so low I couldn’t see enough to overtake the bus ahead as it bumped its way slowly over the poor surface. This went on for over a mile before the Tarmac resumed and the dust cleared. A short while later, thankfully we arrived at our destination. Again, a very short drive from the main road and we found a small oasis of calm. 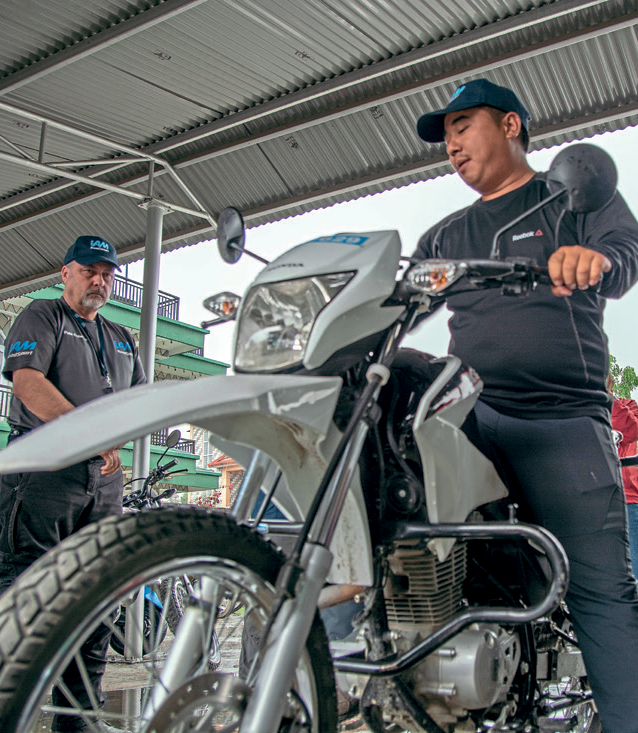 We had arranged a session to be presented by one of the GWT mechanics. It involved repair and maintenance techniques that could be used in the field. Wheel removal to repair a punctured tube, cleaning the brake shoes and pads, draining water from an engine that had been submerged, cleaning spark plugs, etc. It was all well received and everyone got involved. The tyre levers proved problematic though. They were the right length to slip under the brake disc to maintain pressure. Until they slipped. Which they did – twice. Both times the mechanic caught himself smack in the shins. Judging from the strained wince on his face, it certainly did sting! The third time, he kept a foot on them. Learning had taken place.

We had asked for a flat(ish) area to practice front and rear wheel skids. Surprisingly, the local football pitch was chosen. It was rough ground, to say the least. Some fair old boulders were lying around and I certainly wouldn’t fancy playing football on it. We had been concerned about chewing it up with the skidding exercises, but were assured that this wouldn’t be a problem. Actually, I think the damage we did levelled it slightly, so it all worked out okay. We drew a massive crowd once word spread, but the rain soon had everyone back indoors. The monsoon season was approaching and the weather was starting to turn.

We had discussed the use of brakes on motorcycles and the opinion of our guys was that the rear brake was the best brake; they didn’t use the front brake as it could cause a crash. This is not an unusual view in the UK, especially amongst newly qualified riders, so the task was the same, to get them to understand that the front brake is the most efficient, and needs to be applied smoothly and progressively. So we decided to spend a good deal of time on the braking exercises.

The rear wheel skid was no problem and they were grinning like maniacs in no time at all. The front wheel skidding exercise was met with some trepidation, however. It did take a while for some, but they all got there.

There is no real formal training programme for motorcyclists in Nepal. You can attend a ‘school’ which teaches you to pass the test. That test is a figure-of-eight, then ride uphill, stop and do a hill start, turn round at the top and ride back down again. The test takes about three minutes. Or, you can go to a market and buy a licence. There is a Highway Code-type book, but it is never tested, or even read, I suspect. They just follow the example set by their peers.

Doing it for real

The next day was the first full day of off-road training. We awoke to clear skies for the first time and had a clear view of a snow-capped mountain called Machapuchare, which in Nepali means ‘fish tail’. It was about a 40km ride to get to the ‘training ground’, but we had agreed that if we saw somewhere suitable to practice some techniques, then we would stop and do exercises.

On our ride we came across a river bed. In monsoon season the river here is six or seven feet deep and impassable, but at this time of year it meanders through the river bed, no more than a foot deep in places. An ideal ground for training. We stopped there awhile and practised techniques for river crossings, hill ascent and hill descent, getting all the students to practice repeatedly.

We passed a bridge with a 20-foot drop into a dry river bed and reached a road that traversed a hill called Kahun. In the UK, Kahun would be a mountain. A proper one. Snowdon would be scared of it. The vertical ascent was only about 800m, but it was mostly ‘up’. Seriously ‘up’. Nepal does not do flat in any form. This was serious stuff, but the guys took on what they had learned at the river bed and reached the top in only an hour or so, but in better shape than usual. No one fell off though; they were pushing themselves to try new things and were working quite hard. Such is the nature of learning.

We stopped at a village on the way. Terraced paddy fields and plantations of potatoes and corn were all around, reminding us how hard the lives are that the Nepali have. But their pride, honour and friendliness are beyond doubt. If they have nothing, but they see you need it, they will give it. They have a huge reputation for loyalty and fierceness, and you can see it at every level. 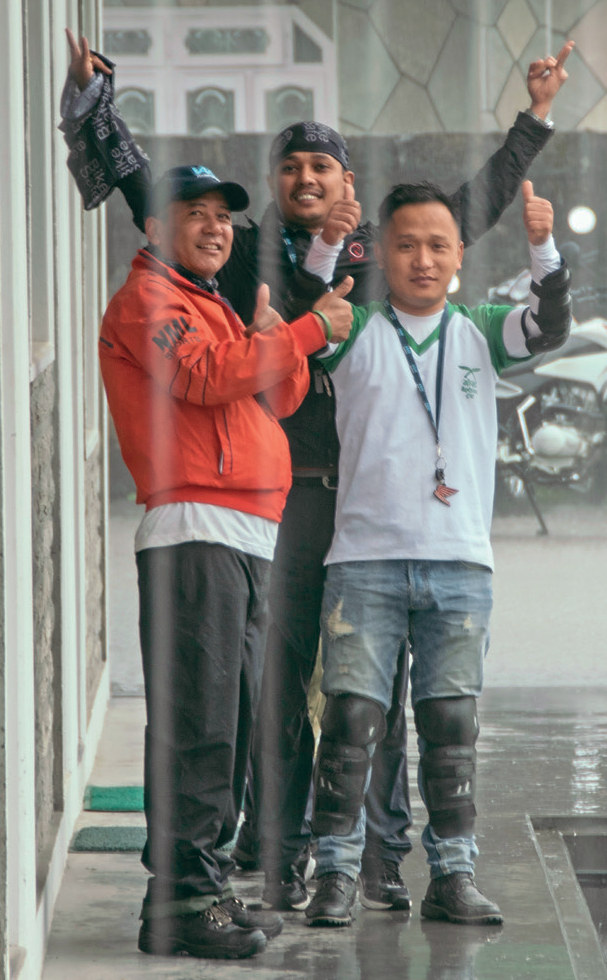 This blog is extracted from an article in Motorcycle Sport & Leisure magazine, December 2020. To read the full story about how the Gurkha Welfare Trust commissioned IAM RoadSmart to coach their team in advanced motorcycling, and how their skills progressed under Pete and Scott’s guidance, you can purchase a copy of the magazine here.

Words and photography by Scott Tulip.