Following in my grandfather’s footsteps

It is 100 years since the end of World War I. This month is also 100 years since my grandfather died of his wounds, at home in Scotland. He was a steam vehicle driver in the Army Service Corps (now the Royal Logistics Corps).

In 2015, I was approached by the London Transport Museum and asked if I would drive a 1914 London Bus which had been restored, then converted into a troop carrier as it had been in 1914. I took several fractions of a second to think very carefully before saying yes. 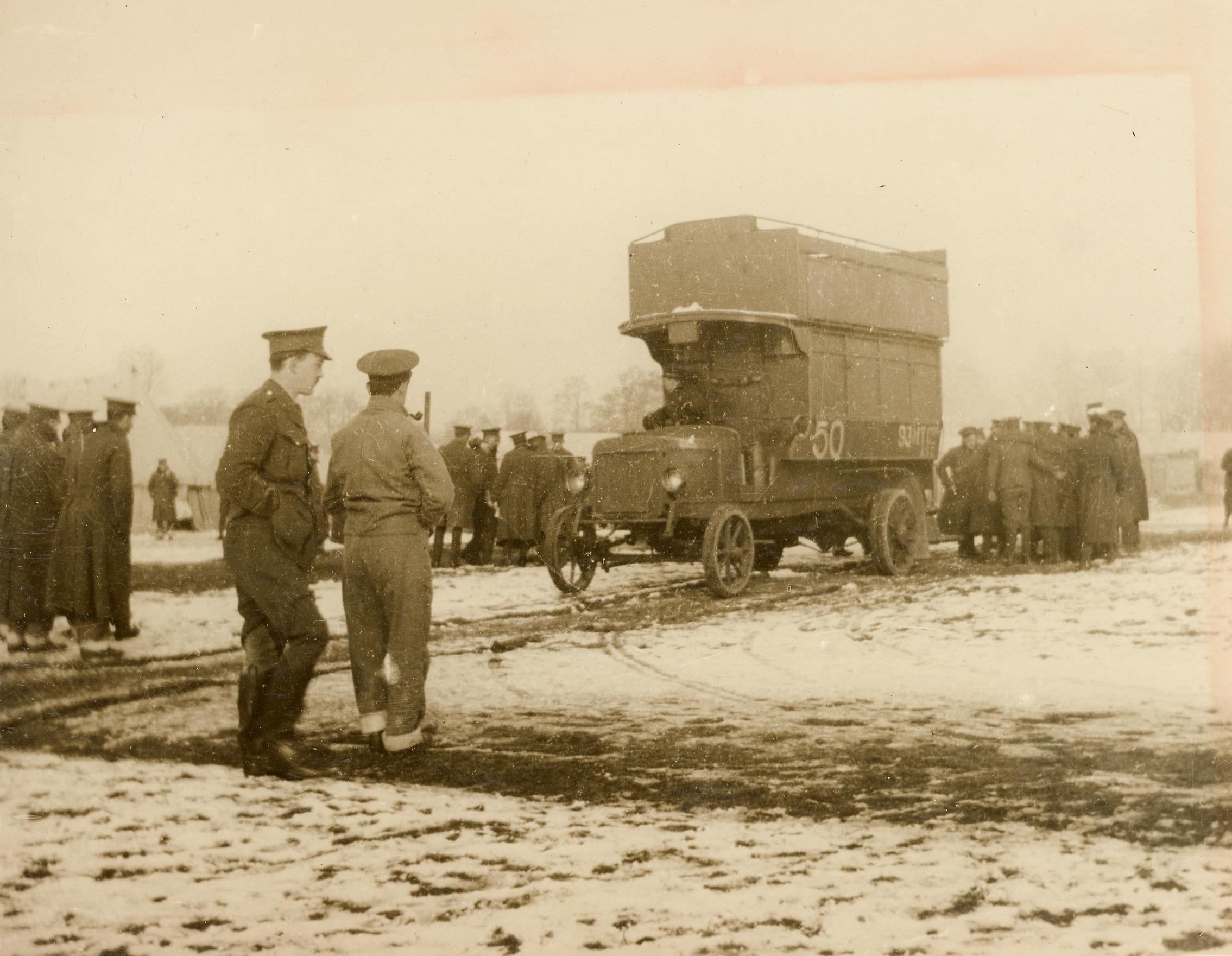 The bus was new in January 1914 and was requisitioned by the Army that year. Nearly 1,000 of London’s buses were taken over like this – they were standardised and for their day very reliable transport, and an important part of the enormous task of logistics that the war became.

The museum also owns another B-type London bus still preserved in its classic red livery. This year they were asked to provide both of these as the backdrop on The Mall in central London for A Nation’s Thank You – the People’s Procession, which marked the centenary of Armistice Day on 11 November. There was a possibility that the buses might be used on the day – but they needed drivers to get to the event. Given the personal connection, how could I say no when asked to help?

When the buses were taken to war each one was accompanied by two volunteer drivers. The efforts and contribution of those drivers were recognised after the end of the war.

London’s bus drivers were the only civilian body represented in the annual parade at the Cenotaph until World War II – a remarkable honour.  And a privilege to be able to drive the old buses they used and tell their tale.

After a lengthy day of preparations and transporting, the late afternoon and evening in central London on Saturday was incredibly wet. I met the low-loader driver carrying one of the buses in The Mall, and when the second bus had also arrived we unloaded and positioned them under some trees. 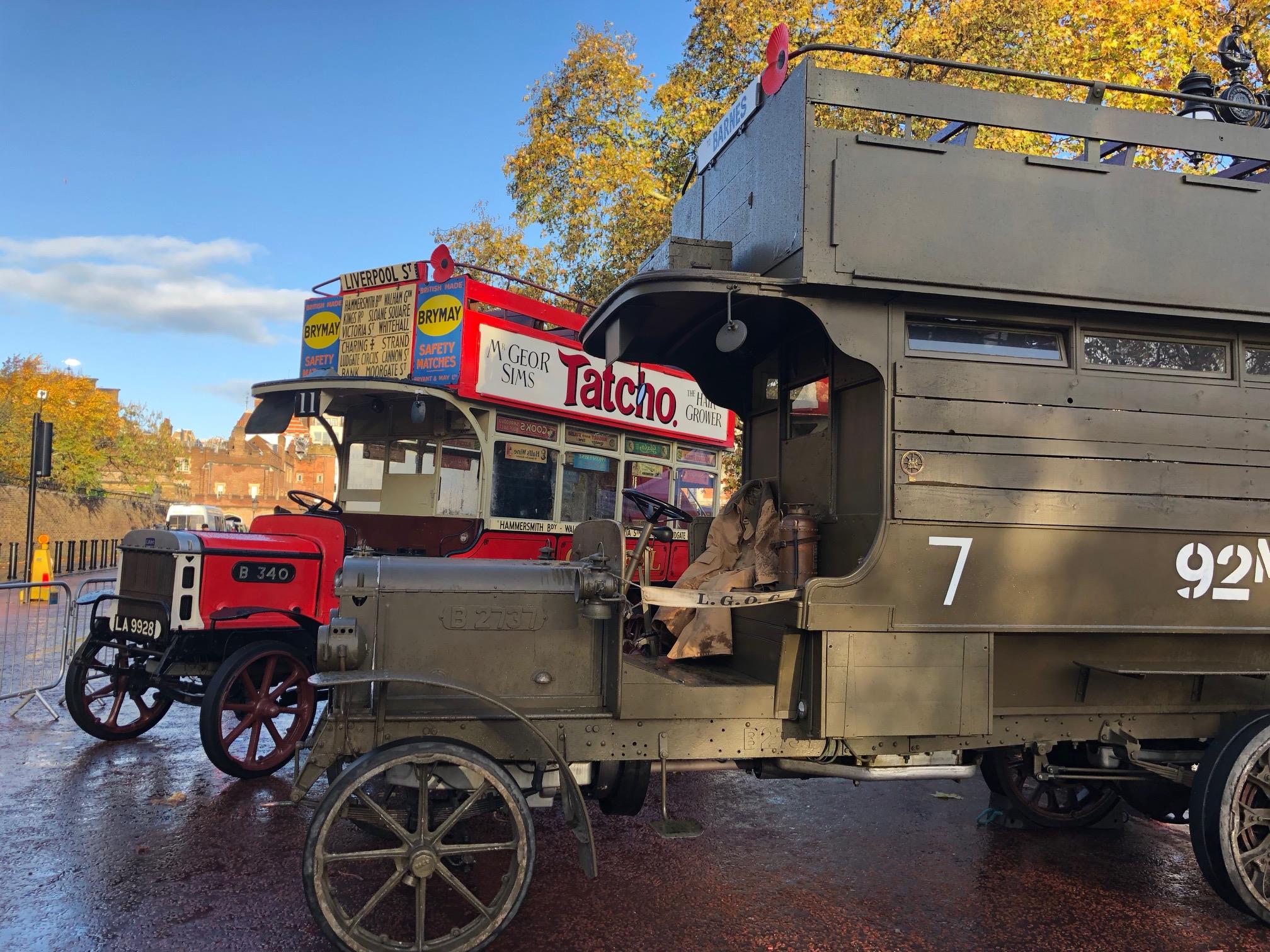 Sunday was a busy day, talking to hundreds of people who came to see the buses, and thankfully by the time the crowds were assembling the rain had stopped and the sun was out.

Eventually it was time to load them back for the journeys to their respective homes. The Mall, leading directly up to the front of Buckingham Palace, is usually closed to commercial vehicles, so it was a rare chance to drive the bus up a stretch of it and turn round to be able to drive on to the back of the low loader.

Loading a bus on a lorry is always an interesting challenge anyway - you have to drive up a metal ramp, only a few inches wider than your own vehicle, with an increasing height in the drop each side if you get it wrong.

Doing it with solid tyres (which also means no tyre tread in wet weather), a need to watch that the rear doesn't scape on the ground as the overhang gets tipped backwards by the slope, and the low levels of performance of a 100 year old vehicle meaning that going too slowly means you may not manage to get all the way up the slope all just add to the challenge.

Trusting the people who help by watching the rear overhang and looking at your wheels to make sure you are lined-up correctly certainly helps! 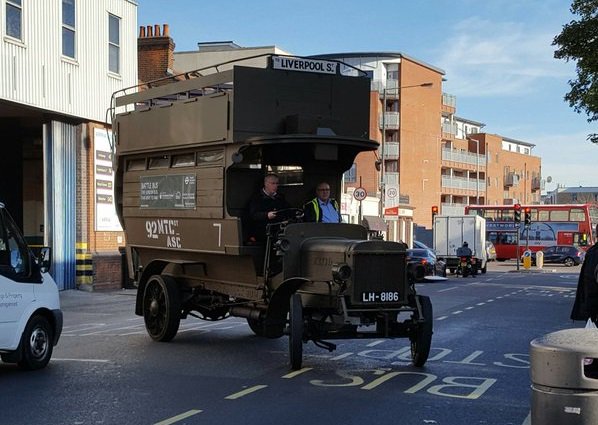 Driving these old buses is interesting. In some ways it is very simple – in the cab there is a steering wheel, a gear lever, a handbrake lever and three pedals. There is one switch – it turns the magneto (ignition) on. There is no adjustment to the solid wood seat. There are no windows to worry about demisting!

The pedals can take a while to get used to. The accelerator is the middle one, and the brake is on the right. At this age the footbrake only works on the rear of the bus, so by modern standards it is a bit weak.

The steering is quite light, although later old vehicles which have been converted to pneumatic tyres can be very heavy. Starting a big engine on the starting handle is physical stuff. There is a knack to it, but it still saves a visit to the gym!

The engines do sometimes “kick back” – they actually run backwards briefly, which is unpleasant as well as unhelpful when you are on the other end of the process, in contact with that handle.  You can control this with vehicles that have a lever for Advance and Retard – but not all (including these buses) have that.

In 1910 the designed speed limit for a bus in London was 12mph, so they are not fast, and double-de-clutching gear changes are also quite slow in them.  But it is huge fun, a mental as well as a physical challenge, and the reactions from people you drive past are a pleasure in themselves – in some cases the double-takes and open mouthed reactions would look at home in a comedy sketch.

While the buses did not travel in the procession, it was a great day talking to so many people about the role of transport in that war of 100 years ago, and in the peace that followed it, and about the importance of those drivers to it all.