I’m not superstitious but sometimes weird things happen that I can’t explain and I get a bit spooked. For example, one evening last week I was sitting in my favourite chair, thinking about plans for the weekend. Nothing unusual there. Suddenly I remembered that my girlfriend Kim (playing with her phone on the sofa opposite) had made some tentative plans to have lunch with a friend. “You still meeting Jen on Saturday?” I asked. At that precise moment, Kim’s phone went ‘ping’ announcing a text message from (you’ve guessed it) Jen, cancelling on lunch. “Ohmygodthatsreallyweird…” exclaimed Kim. Turns out that both I and the text message had simultaneously interrupted her attempt to text (you’ve guessed it) Jen to find out about Saturday’s lunch.

It can’t have been mere coincidence. I’m sure of it. As my colleagues will testify, it’s at times like this that my need to come to terms with the spookiness will see me ‘go off on one’ about the scientific possibility of extra-sensory perception, or some similar unsubstantiated notion. I have been known to try and support my arguments with reference to the untapped capacity of the human brain, the bizarre sensitivities displayed by dogs and horses, and my very limited grasp of quantum physics. Tiresome for the listener, admittedly, but one day they’ll see I’m right. One day.

“It’s a SIGN!” seems to be the more common reaction, as though the event signifies something deep and meaningful. I hope that’s not the case, especially as I’ve experienced another coincidence lately: within the last month I’ve had both my car and bike MOT’d, and both received advisories relating to the brakes, which is a bit of a concern. I hope it’s not a sign of anything other than the need for a bit of routine spanner work rather than of something with a spiritual significance for me. I like to think I take care of my brakes, and unlike some people I do investigate any funny noises, sponginess or sticking rather than leaving it to the gods. The really worrying thing is, I was then asked to write a blog about my experiences of campervanning, and the first anecdote I remembered related to terrible brakes. I swear it’s not a pattern…

It was a few years ago, and I’d just bought a silly but lovable micro-campervan based on the venerable Suzuki Supercarry. Not very comfortable, not very powerful, not very stable and not entirely devoid of rust. It was awesome. Along with two friends and a fair bit of kit, I set off on a long drive down to Croyde for a weekender, taking the scenic route round the north of Devon. All was well until we hit the long downhill stretch of the A39 known as Porlock Hill: a 25% gradient that seemed to go on forever. No problem, down to fourth… hmm, still a bit too racy…let’s have third…that’s better. Holding 40mph quite comfortably with just a touch of brake. And that’s where things started to go… er, downhill… 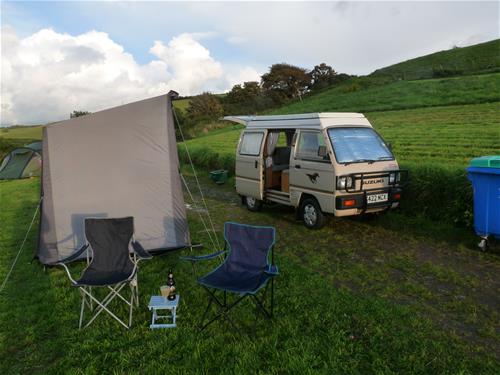 Now, I was aware that the van’s brakes weren’t brilliant, with front discs about the size of milk bottle tops, but for urban pootling they’d proven adequate. In any case, the Supercarry’s crumple-zone-IS-your-legs design philosophy was incentive enough to drive slowly, with a healthy gap to the car in front. Porlock Hill was about to reveal the true limitations of my van’s feeble stoppers. We were gradually gaining on a slow-moving tourist coach whose driver was being very sensible and carefully managing his rate of descent. As we drew closer and closer, I gradually increased pressure on the brake pedal, until I managed to hold a steady gap of about three car lengths to the back of the coach at around 20mph. Which was fine for a few seconds.

It was then that I realised something very alarming. So alarming that I had to share it with my passengers. I didn’t want to cause a panic but I needed them to be prepared. So, in my best pilot-warning-of-minor-turbulence voice I said, “just so you know, I’m mashing the brake pedal to the floor and we’re not going any slower, and if that coach stops we’re going straight into the back of it”. I must have got the tone just right because they didn’t panic at all: they just sat there in a silent gawp, swallowing screams and thinking about their families. Perfect.

It became clear from the smell that I had relied too heavily on the brakes during the long descent and completely overheated the brakes. I knew I needed to let them cool before they’d start to work again. I changed to second gear. This slowed things down slightly, but not enough to let me lift off the brake pedal very much. Fortunately, the road opened out a little and the coach sped up by a few precious mph, just enough to open up the gap and let me rely on the engine braking to give the brakes a break before I broke something. I pulled over at the first opportunity for a jolly good cool down (which my poor van and petrified passengers enjoyed too!) We’d got off very lightly. I’m so used to modern brakes that the whole situation caught me unawares, and I was left feeling a bit confused, as well as extremely lucky. I had seen the signs but didn’t realise their true import.

Speaking of modern brakes, lately I’ve been reading articles about Autonomous Emergency Braking (AEB) with interest. Some don’t like the idea because it ‘takes control away from the driver’ while others think that a last-moment intervention can sometimes be a life-saver, but let’s not get into that debate right now. Besides, a last-moment intervention wouldn’t have helped me avoid hitting the back of the coach on Porlock Hill, as I’d already boiled the brakes. But think about this: development of autonomous vehicles has also given rise to technology that can recognise road signs and offer audible warnings or even make the vehicle act accordingly. Would the Suzuki Supercarry of the future have seen the ‘25%’ and ‘low gear’ signs at the top of the hill and acted in a more timely and effective manner to regulate my speed of descent? It’s a distinct possibility for the future of motoring, and a bit of a scary thought, but not as scary as running into the back of someone I suppose.

In the meantime, we humans need to think about the signs, and not just the ones at the sides of the road. Don’t get me wrong, I’m still not superstitious, but I am off to order some new brake pads.