Heidi Limbert discovered several passions and experiences have merged over the last few years. The main two being mental health and motorbikes. As a rider herself she discovered freedom and tranquillity on a bike, but now has learnt so much more. After gaining confidence riding and a small spill led her to becoming an IAM RoadSmart member in 2009, Heidi has gone on to discover a lot more. Her personal and professional life, passion for wellbeing and mental health has now led her to combine those areas of her life and become a driving force for Mental Health Motorbikes. Bringing together both charities and her work for the benefit of others. Heidi explains why and how her passions and interests have forged into a newfound determination to help others and spread the word and support about mental health, wellbeing, and the love of riding.

Finding Freedom on a bike
I have been a rider for the last 12, nearly 13 years.  Whilst I enjoyed being pillion prior to having my son, it was only after my son (and I) reached a certain age that I decided - and had the money to be able to take my test and afford to buy a bike of my own.  I think my family thought I was having a mid-life crisis, but in fact I was doing something I had wanted to do since my teens, but as a single parent, didn’t have the money or ability to take up.

I did most of my training on my then-partners 600cc Suzuki, so when I passed my test, I was used to the power and weight of heavier bikes. In passing my test, I loved the freedom, independence, and sense of ultimate control over my destiny that it gave me. However, I was surprised at the level that it allowed me to interact with nature in a way that I had never considered would be possible before.   Not only was I able to feel and smell the air, experience the microclimates on a ride and the undulations and cambers in the road, I came to travel to and experience places I would not have otherwise travelled, met a whole raft of wonderful like-minded people who were welcoming and friendly and experiences (rallies, festivals etc) which had eluded me to date. I had a great time enjoying this ‘newfound’, inclusive, and friendly community.

Just over a year into riding, I came off my bike on the corner of a local country road, right at the end of a morning full of riding. (Ironically it was called ‘Freezing Hill Lane’ – something I didn’t know at the time!!)  It was a crisp, yet sunny day in January, where the inevitable black ice and my inexperience on such roads played a major part. Although it was a ‘slip and slide affair’, I did end up right in the path of a car.  If it were not for ‘sound timing’ and the observation and reaction of the driver (incidentally also a motorcyclist), it could have been a lot worse.  As it happened – other than some cosmetic damage to my bike, scuffed leathers in obligatory ‘slide’ points and a dented confidence and pride, I walked away unscathed. To this date, I can remember being more worried about the driver having seen it and whether ‘my baby‘ (black and red Honda 600 F) was ok.

However, I was also left curious to know “what could I have done to prevent this?” Some might say ‘well don’t go out on your bike in the winter!’ but sorry that was non-negotiable. I was bitten by the ‘biking bug’, I had already started to feel it was part of me, my health, my wellbeing.  I’m lucky that I don’t need to ride my bike as part of a commute, but instead able to, now and currently, through choice.

Reflecting on the accident
Looking into how I might have prevented my spill, I came across the local Advanced Riding group – interestingly something which one of the friends riding with me that day had already signed up to.  I joined and begun to learn that there was so much more that I could and should do and know – especially if I was going to be the best out of my bike and keep safe and riding for many years to come. My waning confidence, and some associated relationship issues, saw me dip in and out of the training for the next 15 months or so. When I consistently picked it back up, I gradually increased my personal and biking confidence and learned how to handle my bike in ways I only ever dreamed of being possible.  I gained a community of even more biker friends, from all walks of life, riding all types of bikes, with many using it to go onto other things (such as Blood Bikes), but most important being safer, swifter more confident riders. 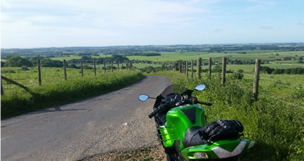 Becoming an Observer
To give something back and in the face of very few female Observers in the IAM RoadSmart Group, I went on to train to be a Local Observer.  This experience was a multi-faceted one.  I was able to support others become safer riders whilst also getting the best out of their bike.  I was able to feel the joy, relief and respite it gave me to a busy working and family life and see the joy and confidence in others as they too developed their safer riding skills. As an Observer, whilst human factors are very much considered in part of the training, it soon became clear to me that rider confidence and mental health had a major part to play.

Mental Health and Wellness
Indeed, I was someone who had personal experience mental health ‘blips’ in my life.  I had Anorexia Nervosa in my late teens and Postnatal Depression after having my son; I had, and still have, a few family members and friends with variable mental health concerns; it is a focus in my working life.  So, I was only too acutely aware of how debilitating mental ill-health can be. I was also acutely aware of how easy it is to say and attempt to say “I am OK” when in fact you’re not! For me a poignant point was when an esteemed member of my motorbiking group (in fact working in mental health arena) did a session at one of group’s social events on ’managing stress’ only to learn two weeks later that he had in fact taken his own life.  Yes, I questioned, and still question, did I miss any signs as to how low, alone and desperate he felt?

So, in becoming an IAM RoadSmart Observer I was highly primed for the neurodiversity within our Groups and those that I might have the privilege of meeting, working with and / or mentoring.    I established quite quickly that some ‘Associates’ (those being mentored or coached to take the Advanced Rider Course) had anxiety or fears that got in the way of their learning or riding. For others it was more profound and established issues, (e.g.: PTSD, Bi-polar etc.) which affected it.    I knew then I wanted to do more to raise the profile within the charity, IAM RoadSmart network, and support others to be aware of potential mental health issues, how to best support and signpost, but also perhaps amend mentoring to support those that were struggling.  I was, and remain convinced, that the disappointing attrition rate has a lot to do with mental health and anxiety issues and that we CAN do more to support.

COVID-19 Impact
When Covid-19 entered the UK in January 2020, and impacted on everyone’s ability to mobilise in March 2020, I became curious of the support networks ‘out there’.  Due to my career, within the mental health arena and personal interest in optimal ‘mental health’, developing resilience and support for those experiencing ‘mental ill-health’, Facebook algorithms often feature information in this area too. This combined with my other love (motorbikes) supported me to ‘stumble’ across Mental Health Motorbike (MHM).

Knowing that reducing suicide (especially amongst those most affected – men) is one of the aspirations of MHM.  I was curious about the organisation and their aims and objectives which led me to contact founder and Director Paul Oxborough.  Supported by his highly inspirational style and approach and the fact the organisations values and aims resonated with mine, I soon (in May) sought to become an Ambassador for MHM. Taking on the role to spread the word and seek to encourage the aims and objectives of the ‘organisation’ that were very personal to me.    Continuing in my interest and drive to support the group and indeed my Welfare Support Officer role within IAM RoadSmart’s Bristol Advanced Motorcyclists (BAM), I then also took up the Mental Health First Aider (MHFAs) training. I have found the MHFA training immensely helpful, adding to my own training to support others. Another group member has also taken up the training and we are working together to support the development of a local register to ease access by local BAM and Blood Bike members.   We will continue to work to support the joint aims of both IAM RoadSmart and MHM to recruit and support members to become safer and more confident riders.

My passion for MHM led to me pursuing this and presenting the opportunity for IAM RoadSmart to be more involved. My vision is for all IAM RoadSmart Groups to have at least one MHFA within their fold.  I contacted Amanda Smith, Head of Field Service Delivery Team, with a view to developing this partnership a hopefully opening many other opportunities of mutual benefit to the individual organisations but ultimately the bikers which they both seek to support.

What Biking Means to Me
Around the same sort of time, I needed to identify the topic for my MSc Public Health.  I have often contemplated ‘what biking means to me, to other riders’, particularly in terms of mental health and wellbeing etc.  Curious I often spoke to others. However, when I looked more deeply, other than this and other anecdotal information through biking platforms, I soon came to realise that nothing had officially been researched or published before. It seemed fitting and timely to make this the focus of my research.

Whilst I acknowledge that the current pandemic has significantly affected travel and therefore riding, I have gone on to do this.  Between March and May of this year (2021) and supported by Paul and Mental Health Motorbikes, I have the pleasure and privilege of interviewing eight bikers to gain their views and perception of how motorbiking influences their mental health and wellbeing.   This study focussed on men aged 45-54 years, including two IAM Roadsmart members and has established some very interesting findings.  I am hoping that this is the first of more research in this area and supports public health practitioners better to understand how motorcycling and groups such as Mental Health Motorbike and IAM RoadSmart support members – no matter their age, gender, race, sexual orientation - to become safer and better riders, whilst their mental health and wellbeing is nurtured. I also hope that this can support IAM RoadSmart committees and Observers and inform further developments.

I look forward to sharing the results from this in the autumn of 2021.