As a child I remember being in the car a lot; my parents both enjoy driving and their love of exploring is even stronger, which naturally led to lots of days out.  I loved going places, but I hated being in the car; the motion and the constant smell of fuel in the ‘70s and ‘80s made me very sick.  Driving also seemed to be a hazardous occupation and I wanted nothing to do with it.  In my teens, I became terrified at the looming prospect of learning to drive and, left to my own devices, I would have kept putting it off, but not learning to drive was not an option I was allowed to choose.

My parents woke me at 5am on my 17th birthday to get me out on the road before there was too much traffic, and thereafter they took me out for at least 30 minutes of practice every single day until I passed my test six months later.  The school of mum and dad was very efficient despite some rather tense arguments and, deep down, I knew I had gained an important skill, but the reluctance and the anxiety persisted for many years.

It’s possible that part of my reluctance was the feeling that I’d never match up to what I imagined advanced driving skills to be.  From a very young age I knew that my dad had passed the IAM RoadSmart advanced test before I was born.  This seemed so lofty as to be unachievable, so why bother trying?  I also knew instinctively that dad would want to pass on his skills, and I wouldn’t be learning with a driving school.

Today I am hugely grateful for the gift he and mum gave me by teaching me to drive themselves; it took me many years to realise that they’d developed in me the observation, anticipation and planning skills that would always stand me in good stead.

After almost ten years of anxious and lacking-in-self-belief driving, my twin daughters were born.  The intensity of having twins can feel overwhelming and, when you eventually emerge from the constant round of feeding, bathing and changing, into moments of actually having some spare time, you realise that the need to get out, go places, and interact with other people is absolutely imperative.

It sounds too simple, but I basically gave myself a talking-to and determined to find some confidence from somewhere.  And find it I did.  By the time the girls were eight, I had decided that I would teach them to drive, just like my parents had done for me.
That decision was partly guided by not wanting to pay for two lots of driving lessons at the same time, and partly by the tiny spark of an idea that teaching others could be a good career opportunity one day.

In her early teens, one of my daughters was interested in joining the police force, so we attended the Thames Valley Police Open Day in 2014 and I came home clutching a leaflet about the Advanced Driving Course, “Skill for Life.”  I signed up in April 2015, became an Associate member of the Thames Valley Group of Advanced Motorists (TVGAM) and met my Observer in the summer of that year.

My first run report held a surprise for me; the word “outstanding” was used.  After my second run, my Observer suggested I should book my test, unless… (he paused dramatically) unless I fancied an attempt at achieving a F1RST, in which case a few more runs should do the trick.  I realised in that moment how much I had changed, how hungry I was to be the best I could be, and how could I ignore the dangled carrot of a F1RST?  More observed runs were added to the diary.  It wasn’t all easy; I struggled with some aspects and worked hard to overcome my old in-built reactions to making mistakes, but my Observer helped me to believe in myself and my potential and, after ten sessions I was ready to take the test.  I was very nervous and I really had no idea if I had passed or not.  The Examiner prolonged the agony by saying, “You’re better than this,” and my heart sank because, to me, that was a negative comment.  Then he turned over the mark sheet and said, “I’m serious, you must take the Masters.”  I looked at the sheet and there was a 1 in every box – a F1RST! 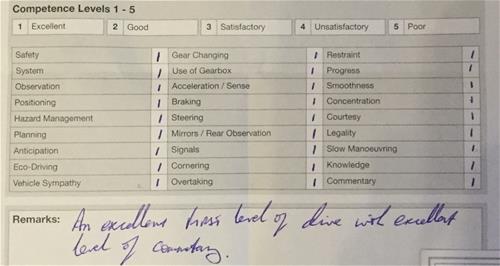 One of my reasons for doing the Advanced Driver Course was to have enough knowledge, skills, and confidence to teach my daughters to drive and I feel it was invaluable in that regard. I taught them through most of 2016 and they passed their tests in early 2017.  My girls know their own minds and they are very strong-willed, so it was an interesting experience with plenty of shouting, obstinate refusals to stop at the side of the road for discussions (oh for a dual brake!) and a few tears shed along the way, but it was also a much better experience than I had anticipated and that tiny spark of a career idea began to burn brighter.

I began my ADI training with LDC in April 2017.  There are three qualifying exams: the theory test, an extended driving test and a test of instructional ability.  I passed all three at the first attempt, becoming an ADI in April 2018.

The above statement makes training to be an ADI sound simple.  It’s not, especially considering that only 1 in 20 who begin training actually go on to qualify.  I have learned so much, enhanced skills that I already had from working in schools and found that every day is an opportunity to discover something new and grow as a result.  The majority of learning comes from daily interaction with a wide variety of people, each with their own unique needs; finding the right words and actions to help them blossom and overcome what holds them back is the most amazing reward, as is knowing that I’m contributing to improved road safety in a meaningful way.

The impact on my own driving has been mixed.  Whilst I share many aspects of advanced driving with my learners, encouraging them to drive to a higher standard than that required for the L-test, I found myself gradually losing the “sparkle” that the ADC had given me.  Thankfully, training to become an Observer in early 2020, restored a fair portion of that and I’m delighted to be actively supporting TVGAM in this role and as the Group’s Minutes Secretary.

This year has brought a new challenge in the form of training potential driving instructors (PDIs).  Three of my trainees are now qualified ADIs, with many more in the pipeline.  I’m thriving on working with a mix of learners and full licence holders and looking forward to developing further in the driver training industry.

The last six years have been a whirlwind and I’m yet to take the Masters test, but I will, one day!  I think that is my next major challenge, along with steadily improving my performance as an ADI.  I must, effectively, requalify at least once every four years and I would love my next result to show that I’m performing at a higher level than three years ago.

Looking back on all the years pre-2015, I would never have imagined that I would be where I am today.  My journey from terrified teenager to accomplished ADI and advanced driver is, to me at least, miraculous and I’m so grateful to all those who have helped me along the way. 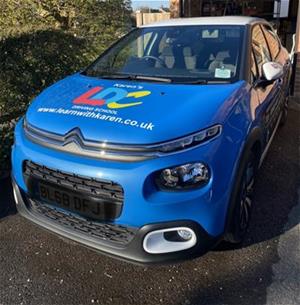