After a serious road traffic accident and traumatic brain injury at age 29, why would you ever get back on a bike?  It’s a question to ask Paul Batten who, despite a ‘pause’ of nearly ten years, not only got back on a bike but has recently passed his IAM RoadSmart Masters qualification.  This qualification provides true one-to-one mentoring support, coaching and guidance that will help you to attain what is recognised as the highest standard of civilian driving or riding ability in the country.

Since his accident, Paul has been on a real journey of discovery but he’s keen to share what he’s learnt with IAM RoadSmart Members and interested readers and how he believes this training will help save lives. 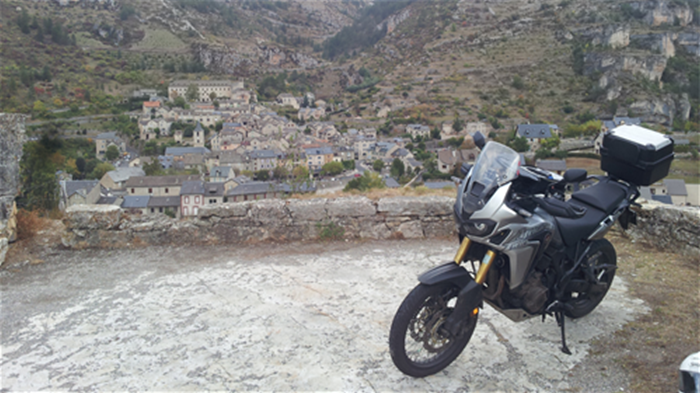 Paul’s accident involved a collision with another vehicle.  The other driver, who admitted fault, was turning right from a side road, and crossing his carriageway.  According to police statements, the driver ‘saw the car behind him but didn’t see him’.  The collision was at a relatively low speed (he was in a 30mph zone) but resulted in multiple and extensive injuries (both orthopaedic and neurological).

The most life-changing injury however, has been the head injury (a subdural haematoma to the left frontal lobe requiring burr hole surgery).  Paul has since faced cognitive and behavioural changes common to injuries to that part of the brain including short-term memory loss and emotional lability.  The latter can include relatively benign issues (like crying at the end of a horse race while everyone else is cheering) to more serious issues with anger management.

Through the care and attention of what he describes as ‘our amazing NHS medical staff and institutions’ and through developing new skills and techniques including Cognitive Behavioural Therapy (CBT) and Neurolinguistic Programming, he has been able to work with and overcome the changes to his mental state following the brain injury. It’s still a work in progress!

For many years Paul ‘wasn’t ready to put his life back into someone else’s hands’ and get back on a motorbike but he joined the IAM RoadSmart Devon Group in 2012 where he trained under Robert Stevens and passed his IAM RoadSmart Advanced Riding Test.  His examiner was Greg Jarrett, an ex-police rider who he was able to ride out with on other sessions including one ‘truly inspirational’ ride where Greg led a section of road whilst providing a running commentary through paired headsets.  ‘His vision and hazard assessment was just way, way further ahead in the road than mine – it was a real eye-opener and a game-changer for me’, Paul says.

In summer 2020, Paul started training for his IAM RoadSmart Masters with Callum Bremner and passed with distinction in July this year.

Since starting the IAM RoadSmart Masters, Paul has grown in confidence with his riding, pushing previous boundaries whilst simultaneously ‘skilling up’.  He has picked up good advice along the way and learnt some valuable lessons. ‘The Masters just brought it all together’, he says.

Paul confirms: “My whole ride has changed but what I have found most rewarding about the IAM RoadSmart Masters skillset is how comfortable I am now on the bike.  I’m sure I am a better (and safer) rider - my position in the road has improved and I’m looking further ahead in the road and getting earlier views.  I am more comfortable physically (and relaxed mentally) on the bike (and in all situations and road sections) and therefore in better control. Sounds like progress!”

“The Masters has also provided an intense focus to my rides.  This can lead to the exclusion of all else and bring me into the present moment or ‘the now’- an almost meditative ‘flow’, and one that has been documented in other sports and activities involving high levels of concentration.”

“They talk about 10,000 hours of purposeful practice to become an elite in an activity.  I don’t think I’m anywhere near that figure, but I do cover a high mileage each year and the Masters has definitely added the ‘purposeful’ to those miles!”

“One of my personal goals has always been to feel (but also to look) comfortable and in control on the bike and I think that you can tell an IAM RoadSmart-trained or emergency services rider by the way they ride (whether they are in front of you or behind in your mirrors).  I want to be part of that group and I think the Masters has brought me closer to that goal.  Good riding and bike handling are qualities that get noticed by all road users, including witnesses to an accident - Think about that last fact for a moment… In my case at least, it was instrumental in my recovery and the level of care I received post injury.”

Paul has had a much more recent accident involving a vehicle pulling out in front of him and despite the driver ‘looking right at him, not seeing him’.  He was shunted off the carriageway and into a hedge bank.

He reflects saying: “It is a useful exercise I think, and even after an accident or near-miss where we are not at fault as riders, to ask what we could have done differently to avoid the situation.  I have asked myself this with regard to my own close shaves and I think the list is definitely shorter since my time riding with IAM RoadSmart.  Better rider = different potential outcomes.’

Paul concludes: “Perhaps the rider I am today would have been able to avoid the accident all those years ago. Impossible to know and sometimes events are taken out of our hands despite our best preparations.  I have no regrets.  I was lucky.  More recently though, my IAM RoadSmart training has almost certainly saved my life, and probably more than once – That isn’t luck anymore.

Shout out to Callum, Dave, Shaun.  And respect to Robert Stevens and Greg Jarrett.