Of Meghan and motorbikes

A short while ago Harry and Meghan announced their engagement and much of the nation descended into misty-eyed romance. Certain individuals (naming no names!) began helplessly bemoaning the fact that Britain’s most eligible bachelor was now officially ‘taken’. Some began speculating about what the dress would look like, or asking just how Britain would ever come to terms with having an American (shudder) in the royal family.

The more practically-minded among us remembered that we weren’t actually on the guest list, and promptly turned our attention to altogether more pertinent questions such as ‘when is it, and do we get an extra day’s holiday like last time?’

Ah, last time. 2011 seems like ages ago, but the smugness I felt as I booked my extended Easter holiday is still fresh in my memory, as are the ashen faces of colleagues who had missed that particular trick. Cheers, Will and Kate. The timing couldn’t have been better. Apart from the odd shower, spring is a great time for a biking holiday in the north of Spain. Temperatures were fresh and comfy making camping a pleasure rather than a chore, and April’s ‘r-in-the-month’ status meant we just caught the end of peak seafood season. The only slight drawback of the timing was felt while live footage of the wedding ceremony was being broadcast: the Spanish love anything royal even if it’s British, and all the bar and restaurant staff were glued to their TVs, the result being a temporary but noticeable lapse in their enthusiasm for cooking and serving food.

Anyway, about the biking. I’d ridden on the continent before but this was the first time two-up, and with one Significant Other plus a week’s worth of luggage and camping equipment to fit on the bike, I got a bit nervous in the run-up to the trip. Had we packed enough stuff to cover all eventualities? Would the bike’s handling be upset by all the extra weight? Would the experience be terribly uncomfortable and make us want to kill each other? 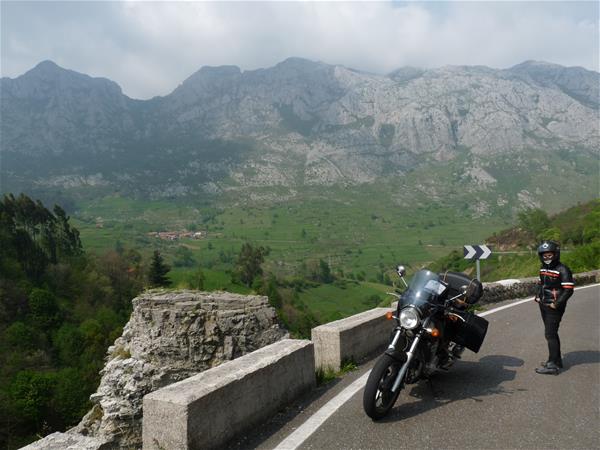 In the main my worries were unfounded. My bike at the time was a Suzuki GSX1100G. Over the course of the holiday it came to be referred to as ‘The Elephant’ on account of its prehistoric lineage, elephant grey colour and massive overall bulk that really made me feel more like a mahout than a motorcyclist. At least the space, comfort and performance levels were more than acceptable for our…erm…mammoth tour.

Unlike an elephant, the bike was slightly put out by the addition of a couple of humans and their luggage, and handling did suffer to an extent. One effect was that our combined weight used up much of the available suspension travel. Not a problem for the most part, except in left-hand hairpins (of which there are many in the Picos de Europa) where the side stand would scrape along the ground. And before anyone mentions upping the preload, I did, as far as it went. The main effect was on braking, both in terms of overall stopping distances and low-speed control, resulting in a few hair-raising moments, notably on the steep and heavily ribbed ramps leading down into the bowels of the ferry.

Another challenge (and a further reason for the Elephant moniker) was the way that the panniers, expanded to their fullest, stuck out like a pair of giant ears, to the point where manoeuvrability in tight spaces and filtering through heavy traffic became a bit of a concern. I must admit to one minor parking ‘incident’ caused by my failure to remember just how wide the panniers were.

As ever, maintaining a healthy ‘safety bubble’ and generally being more observant are key to preventing these kinds of challenges from becoming problematic, and this should really have been something I was mindful of at the start of my trip, rather than something I discovered over the course of it. I’d also admit that we had overloaded The Elephant a little bit. Camping does require a certain amount of essential equipment, and on subsequent trips abroad we’ve approached packing with a view to minimising weight rather than cramming every last cubic centimetre of storage space with unnecessary junk. You can always compensate for having fewer clothes by planning for a mid-holiday laundry stop. There were plenty of other new learnings that I could list, but I’ll bore you with those another time.

At the time of this particular trip, the royal brothers were both known for being keen motorcyclists, so I was slightly saddened to learn recently that William has since hung up his leathers, but I’m hoping that Harry’s biking career lasts a little longer. Maybe he’ll persuade Meghan to join him on some two-up adventures? Maybe she’ll catch the biking bug herself? Will she buy British or insist on a Harley? Will it be a Triumph or a Victory? Maybe they’ll get matching helmets…