The boys done good ... and feeling like a parent on exam day

It was a pleasant surprise to receive an email from my area manager not long ago asking if I would be free to help with an IAM RoadSmart event at Silverstone for a couple of days. Being an out and out petrol head of course I said yes.

When I received the details, it turned out to be #FormulaDriveSmart … a busy schedule to put the most talented young racing drivers in the country through the IAM RoadSmart advanced driver course - in two days.

The drivers are part of the British Racing Drivers Club’s Rising Stars and SuperStars programmes, designed to help the future stars of motorsport reach their potential.

Paddy Hopkirk, race and rally legend, BRDC Vice President and IAM RoadSmart mature driver ambassador, realised that there could be potential for both organisations to dispel some myths and benefit from an event incorporating advanced driving and the racing stars of the future.

Having received the briefing for the two days, I started thinking about the drivers that I would be working with.  Looking at the media pack, they racked up some pretty impressive credentials on the track. 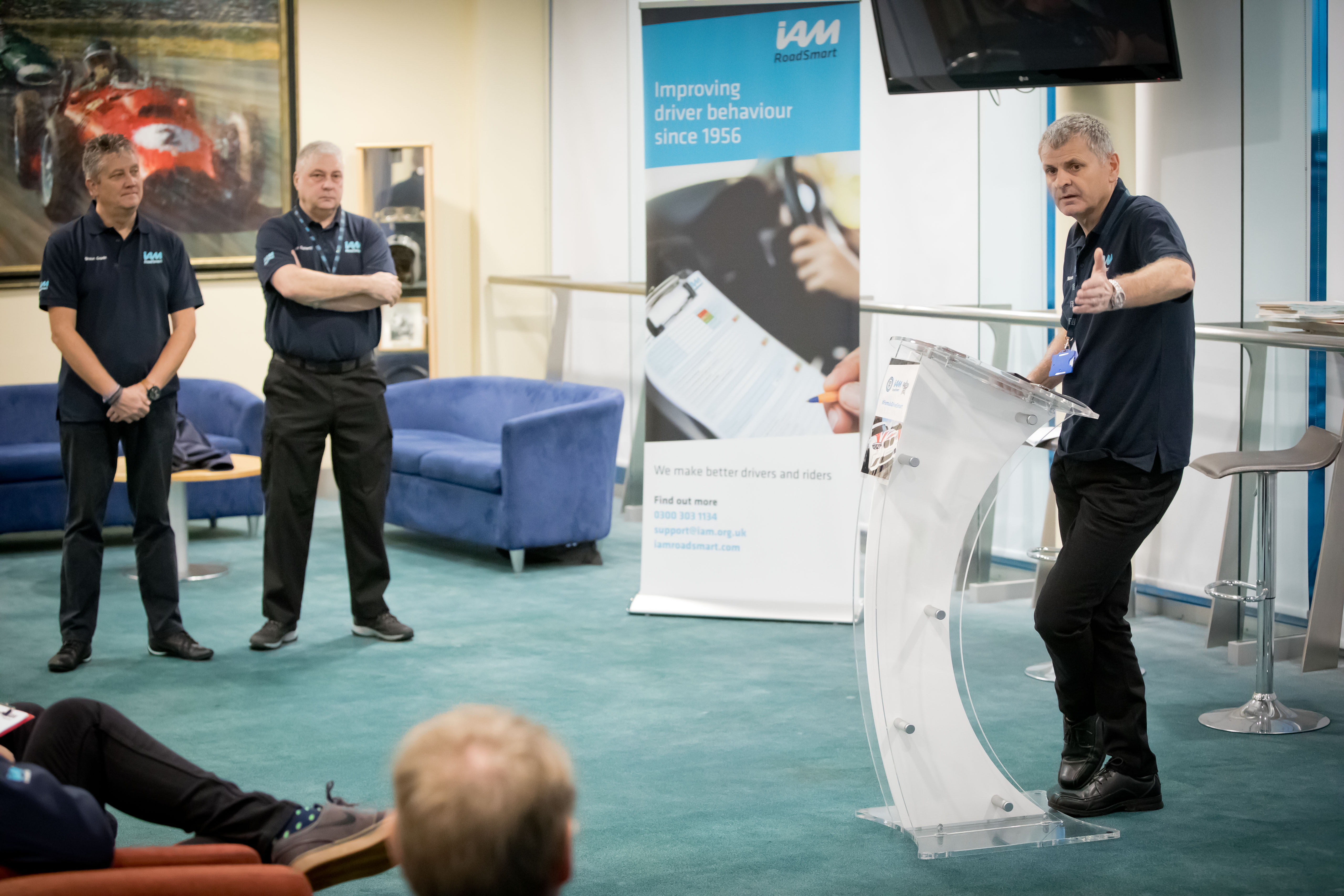 Could we observers really teach them anything about advanced driving in two days and get them to test standard? The IAM RoadSmart standards team made it very clear, there would be no compromising on test standards.

Were they a load of boy racers? Would they want to learn? How did they perceive us? Did they think we were a load of old fuddy-duddies with leather-soled shoes and open-backed driving gloves?

We assembled at the BRDC Clubhouse, in the middle of Silverstone circuit on a cold Monday morning. After the initial briefings, introductions and customary press calls, it was down to business.

Being assigned drivers/observers was a bit like being picked for sports at school – a bit of awkward foot shuffling and looking hopeful from both the drivers and the observers. I chatted to two guys near to me and we agreed to go out together – my drivers were Stuart Middleton, 2017 European GT4 Vice Champion and Jordan Albert, British GT Driver.

We had been provided with BMW 1 series and Minis to use for the event – two drivers and an observer to a car. It very quickly became apparent that the drivers certainly had car control skills, but what struck me immediately was their attitude. Definitely not boy racers - neither were they arrogant: they were passionate, knowledgeable and keen to learn.

These guys showed a degree of maturity that I hadn’t expected to see. They realise their sponsors invest heavily in them, they are a package; their careers depend on having a driving licence and they get their kicks on the track – they don’t need to prove anything on the road.

Getting them to test standard involved teaching limit points and slowing down some processes. Their knowledge of car handling characteristics meant they tended to enter particularly left-hand bends more quickly than we would – so the mantra of ‘stop in the distance you can see to be safe on your own side of the road’ was really helpful for them. 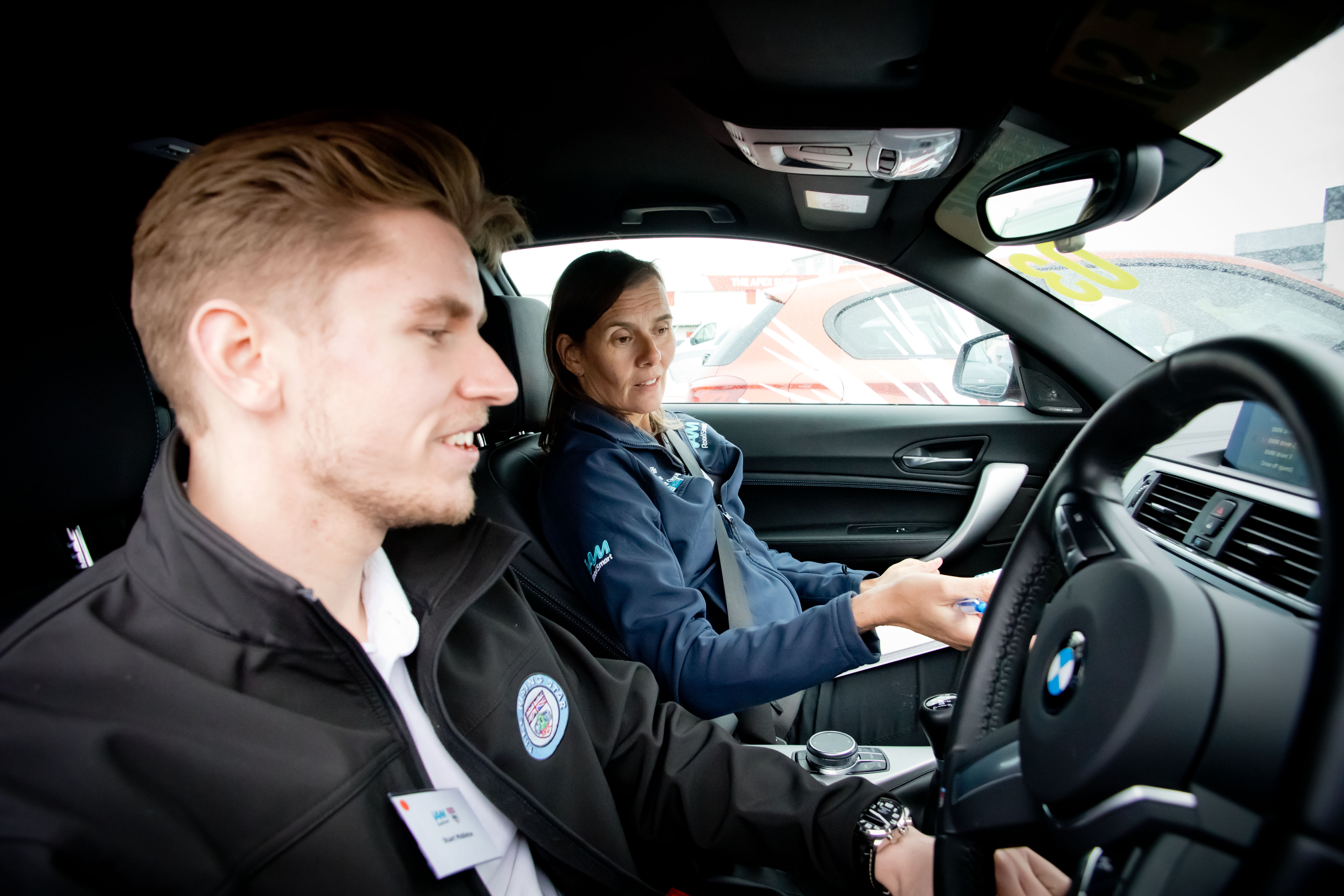 Road cars don’t have ‘crash gearboxes,’ and block changes can afford to be a bit slower for comfort and economy but they soon adapted to this. Close proximity racing also means they are quite comfortable around other road users – giving ordinary drivers room for error and reading body language was invaluable for creating a safety bubble.

On the second day the assessments began. We observers sat around like expectant parents, waiting for our drivers to come back.

I felt really chuffed that my guys both passed with a F1RST, but in their typical, understated ways, I had to drag the results out of them!

I really enjoyed my two days with Stuart and Jordan – I think we dispelled some myths on both sides and I am sure that the skills they learnt will stay with them on the road. It really was a pleasure and I look forward to following their careers on the track.