Vision Zero: Getting to grips with the future of road safety

Blog post posted on 05/10/18 |
0 x
Insight
What do you get if you cover your entire car windscreen in cardboard? Zero vision. This is not to be confused with Vision Zero: that is something quite different, which I’ll explain in a moment. And in fact, if your car happens to be equipped with 360-degree cameras, then having zero vision through the windscreen is not the insurmountable obstacle that you might assume it to be. I’ll come back to that a bit later too.

Vision Zero is the name that Continental have given to the philosophy behind their ongoing innovations in tyre and vehicle technology: the principle is that every technological advancement, however small, plays a part in moving us towards achieving a world in which there are zero collisions and zero road deaths. It sounds like an ambitious vision, and it is, particularly if you think of Continental as nothing more than a tyre manufacturer. However, Continental develop and manufacture a huge range of vehicle systems and components including braking systems, stability control and other driver aids and even dashboard instruments, and are responsible for up to 50% of the components that go into certain current car models. This makes them one of the most influential players when it comes to the landscape of vehicle safety, and not just in relation to the round black things on each wheel, although those are remarkably interesting things in themselves.

Continental invited IAM RoadSmart to partner with them in bringing a series of Vision Zero events to the general public up and down the UK, to promote more understanding of the benefits of safety systems increasingly available in new vehicles, awareness of the importance of tyre quality and condition, and to highlight the influence that drivers can have in improving road safety.

Junique and I were among the 1000-or-so drivers who were fortunate enough to experience a Vision Zero event this year. We attended one of the final few UK events, held at Dunsfold Aerodrome (famous as the location of the test track of a well-known motoring TV show), and it turned out to be an action-packed and informative experience. Our group was dropped in at the deep end, being the first to experience the wet braking and handling exercise, carried out on a sopping wet stretch of the track. We were introduced to pair of identical BMWs, one fitted with premium tyres from Continental, and the other with budget brand tyres. The budget tyres were outshone by the premium tyres in both tests. All drivers noted the Contis’ more controllable, predictable feel in the cornering test, while the results of the braking comparison spoke for themselves. Braking on the wet surface from around 50mph saw the budget tyres sail way beyond the stopping point achieved by the premium tyres, with the ABS working overtime and a symbolic pair of mannequin pedestrians now in view in the wing mirrors: they probably didn’t survive the imagined impact. 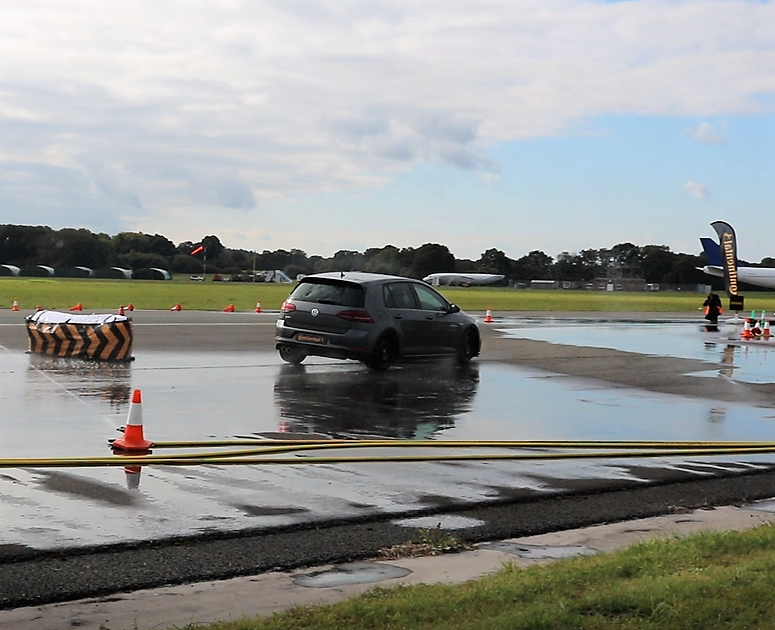 We were then swiftly ushered over to a pair of identical VW Golfs which had been shod with the exact same type of tyres, the only difference being tread depth: the legal minimum of 1.6mm versus the recommended minimum of 3mm. The difference in wet braking performance was startling. By and large, the tyre industry recommends replacing tyres when the treads are worn to around 3mm. Anyone with a cynical view of this recommendation needs to experience the oh-my-gosh-why-haven’t-we-stopped-yet performance of ostensibly legal 1.6mm treads, which are clearly deficient in their ability to clear large volumes of standing water.

Here’s an even scarier thought: what if you had no tread at all? The guys from MERITyre had come along to the event to provide some useful tyre information and advice, and had brought with them some examples of tyres that had been replaced by their fitting centres, some of which were barely recognisable as ever having had tread in the first place (check out our video from the day). I dread to think how many of these are out there on the roads; their owners either oblivious or simply not caring.

As if Junique’s fragile nerves weren’t already shot by this point, the next exercise was a demonstration of Autonomous Emergency Braking. The system fitted to our Volvo test car is guaranteed to be able to brake in time to avoid a collision at speeds of up to 12mph, with no input from the driver. Even at this slow speed, driving deliberately towards a (padded) obstacle with no intention of braking is an unnatural, heart-in-mouth experience, particularly in the last couple of metres, when it takes an enormous effort to fight your natural instinct to brake. The system cuts in with a tiny amount of space to spare, braking with full power only once it’s sure that the driver isn’t going to respond in time.

In everyday driving, I’m sure you’d never even know you had the system fitted. This is important from a driver’s point of view, in that it wouldn’t do for the car to be constantly taking control at the merest sniff of a hazard, or braking sharply without warning to other road users unless a collision really was imminent. It is also important from the point of view of IAM RoadSmart’s philosophy. Drivers still have ultimate responsibility over their vehicles and are still the primary contributors to safety, whether that be through driving skill, or the willingness to check the condition of their tyres regularly. A number of our observers volunteered to attend the event, taking every participant (including me; details will be in another blog!) out on an observed drive, and with all the focus on tyres and other technology, I think this was a great opportunity to remind everyone that they still have ultimate responsibility for maximising safety through their own skills and attitudes.

We were given something of a glimpse into the future during the afternoon, with a demonstration of Continental’s latest tyre compounds and puncture-resistance technologies, as well as automated parking and other electronic systems that I never knew had been developed by Continental. Which brings us back to the ‘zero vision’ exercise. Although I can’t think of a real-life scenario in which you’d ever need to do this, the all-round vision that can be provided by external manoeuvring cameras and proximity sensors really can enable you to drive without looking out of the windscreen at all, by displaying an incredibly accurate picture of your surroundings on the dashboard display. It really feels like it’s only a matter of time before this and other incredible technologies will be brought together in fully autonomous vehicles. Will it eventually result in zero collisions and zero road deaths? It’s some way off, of course, but a picture is gradually emerging of how it could eventually be achieved.

In the meantime, I’m off to practice my pull-push steering technique and to check my tyre pressures.