Why are infotainment systems so distracting?

The launch of our TRL simulator study on 17 March was in some ways a welcome diversion from Covid-19 reports in the media. The study that was recently carried out by TRL on behalf of IAM RoadSmart, the FIA and the Rees Jeffreys Road Fund had always been scheduled to launch this month to coincide with the new edition of RoadSmart magazine. But you can only imagine the last-minute ‘will we, won’t we’ discussions that went on in the office regarding whether or not to postpone it.  In the end we realised that this was an important report to get out and the media might welcome a distraction – so to speak!

To a certain extent we were proved right. The report achieved good coverage in the media and I spoke to radio stations around the country to raise awareness of the dangers that these systems are having on drivers. The highlight was a parliamentary question by one of the MPs we contacted and, although everyone has bigger fish to fry right now, at least a discussion at government level has now been initiated.

The findings themselves are very worrying. Most drivers assume that systems built into their car must be safe. Surely automatically synching with your vehicle’s main infotainment screen must be less distracting than trying to work a phone from a cradle (something we don’t condone but know takes place all the time!)?

The answer turns out to be ‘no’. We will need more research to understand whether it is the size of the screen or the multiplicity of functions (or maybe just the temptation to use them) that is actually causing the concerning increase in reaction times, swerving across lanes, or longer glance times that were observed in the study.

I’m sure many car makers have undertaken such research, but the challenge is being able to cut through commercial confidentiality to get at it, and this is one of the key changes we want to see come out of this work. One of the most significant findings from the study was the need to improve transparency in the way in which car designers apply the guidelines on distraction. In the future, I’d ideally like to see some form of independent testing taking place before and after a vehicle is in the showroom, so that consumers can make informed choices. This could come in the form of a star rating system for distraction as part of the rating for crash worthiness, and this could easily be achieved through collaboration between authorities and car manufacturers.

The key strength of this report is that it uses similar protocols to previous studies where alcohol, cannabis or traditional smartphones were used to distract the driver.  This meant we could assess the degree of distraction and produce a ‘league table of shame’ if you like. 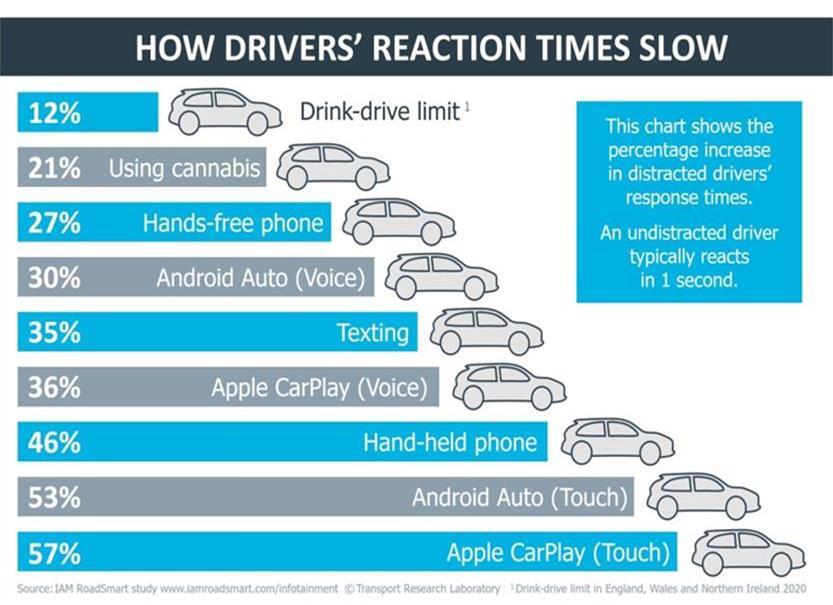 The headline from this chart is of course that the impact of Apple CarPlay and Android Auto is worse than that of alcohol and cannabis, but I’m pretty sure the same results would have been generated by any built-in system relying on a touch screen.

That leads to our next challenge: voice control appears to be less distracting, so should IAM RoadSmart actively promote its use or not? ‘Yes and no’ is the less-than-clear answer, I’m afraid. Although it is lower down the distraction table than touchscreens, voice control still delivers a concentration penalty on those who want to shout a command in their car rather than use their fingers and thumbs.

While we wait for any top-level changes to be discussed, it’s important that every driver understands that using a touchscreen inevitably takes their eyes off the road and they are increasing their risk of missing some vital clue to a developing hazard on the road ahead.  16 seconds doesn’t sound like much but at 70mph that’s 500 metres. The outcome could be catastrophic.

In these unusual times we must all work to minimise the impact on the emergency services. Just avoiding crashes linked to distraction would make a major difference. A collision avoided is hard to quantify, but if you can be a safer driver by programming your satnav or organising your playlist before you set off, then now is most certainly the time to do it.