IAM RoadSmart’s 180 local groups rely on the dedication of their volunteers, and we are grateful to every one of those members around the country for giving us their time and expertise and always deeply saddened when we lose one of the IAM RoadSmart family.

This month we’re very sorry to report that Bill Smith of the Wilts and Bath Advanced Motorcyclists (WaBAM) group has passed away after a short illness. As a very small gesture of consolation to his family and friends, we’d like to recognise Bill’s significant contribution to WaBAM as part of Volunteers Week. 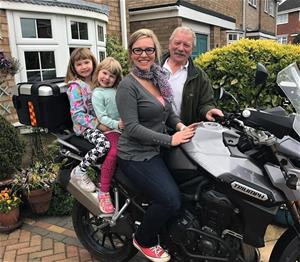 Bill joined WaBAM as an associate, rapidly progressing and it wasn’t long before he successfully passed his test. Shortly after that he began training as a Local Observer, a role he took to like a duck to water. His knowledge, skills and enthusiasm were enormously beneficial to those associates lucky enough to have him as their observer.

However, that wasn’t enough for Bill, who relished taking on the challenging role of WaBAM’s publicity officer. He became a regular on local radio, conveying the message that motorcycle safety was not only an important issue, but one that could add to bikers’ enjoyment, and benefit wider society.

Bill was a firm believer in lifelong learning and became a National Observer while continuing his publicity role, and next, WaBAM’s Vice Chair.  However, that still wasn’t enough for Bill who also became a regular representative of the IAM at BikeSafe events. In fact, his contribution was so highly valued by the Wiltshire Police that they asked him to expand his role to become a BikeSafe on-road assessor, which he did with his usual enthusiasm.

Bill ensured his skills remained sharp by regularly riding with local police officers, as well as taking part in regional training events. He was a member of WaBAM’s training team – designing and delivering training events to new and established observers, plus a member of its Observer Support and Development Team, providing an informal agony aunt service to any observer at any level who might have encountered difficulties with any aspect of observing.

After lockdown Bill led the way by providing one-to-one on road checks to observers who had necessarily missed practicing their skills.

Aside from Bill’s obvious skills, experience, and dedication to WaBAM, he was loved for his good-humoured banter. He held strong opinions about many things but was never closed minded. His peers remember him for his supportive and positive approach to associates, who met him as strangers and became good friends.

Such was Bill’s dedication to improving the standard of riders on the roads, he had recently joined RoADAR, and obtained a Gold pass. And even in his final days, he was anxious that his associates were reallocated and looked after by the group.

If you feel inspired by Bill’s contribution to WaBAM, you can find out more about what our local groups do and how to join at: https://www.iamroadsmart.com/local-groups