Posted on 06/10/19 |
2 x
Well that's where he said we were going and in a way we did though not quite in the way we thought.  However, that may be explained later.

The first thing to say was, THERE WAS NO RAIN!
I know there was some going to Squires and many said so, even used it as an excuse for arriving in civvies, but when we set off (all 6 of us) it wasn't raining, and thus it was so throughout the whole day of the ride in the sun. 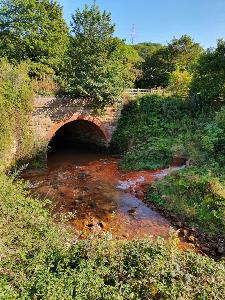 Dave explained where we were going in some detail, sadly for this old brain I lost track quite quickly but was entirely happy just to follow, bearing in mind I hadn't been on the bike for nearly 3 weeks :-((  One thing I did know was when Dave Bu is leading he invariably starts off by going in the other direction anyway ;-)
(This beautiful piccy taken by Dave is a reference to the iron ore mining below, I couldn't get it lower down.  It shows the river still comes down through the iron ore rocks producing this amazing colour.)
And so setting off from Squires to go down into Sherburn and onto the delightful and familiar wiggly roads that encompass Escrick, Elvington, Wheldrake and briefly joining the A1079 York to Hull road on to Stamford Bridge and through Claxton joining the A64 even more briefly left and right through Flaxton.  Oh and through Sherriff Hutton onto the Stillington TT and probably as good turn from Brandsby to Ampleforth we parked up in that cute village to T&P at Kirk's Coffee House & Kitchen, all home baked OMG all delicious ;-)).
Completely failed to get the team piccy here, DOH! 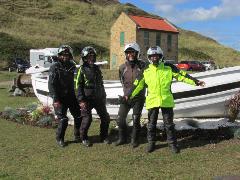 Ian had to leave at this point so the rest turned around and made our way up Oswaldkirk Bank, briefly admired the view over the Howardian Hills and plunged right and left through Nunnington (fabulous National Trust Elizabethan Hall there, go see it).  Swinging onto and off the A170 we climbed steadily up to Fadmoor and Gillamoor (of surprise view fame, it actually has a plaque saying so) across the moor and down to the edge of Hutton-le-Hole before rising again to tackle Chimney Bank, in the dry for a change, into Rosedale Abbey.
Up and across the high moor, bit breezy right across, down to Danby and up to the A171 turning left, (Mark turned right) we stayed on it for a bit longer before swinging right down to Skinningrove, which is known for the Steelworks, still going, iron ore mining, now ceased, it was historically interesting and sad that the small streets of miner's cottage rows were there but a lot of the work related to them had ceased.
The lunch stop was at a lovely small country Inn, the Fox & Hounds, in a small village in Goldsborough just up the coast from Sandsend, the licensee was not a relation of Dave's as it happened ;-)  But the food was excellent and very well priced (will go back) which we enjoyed in the pub garden (weather still holding good) after which we trundled down to Kettleness where there was an actual sign to the Cleveland Way, which actually a bit confusing as one interpretation of it lead to a cliff. 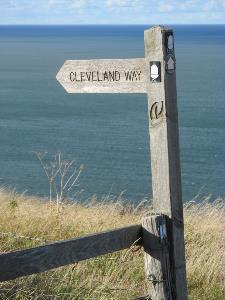 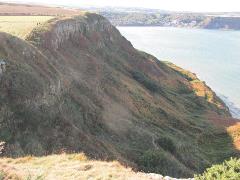 At this stage it was 20 mins to 4 so we decided to romp down the A172 from outside Whitby to Malton at which point Dave, Chris & Tim wheeled down the Buttercrambe TT, followed later by Pete who need a field gate latch thingy from the totally amazing country/farming shop of Ralph Yates & son.

Thanks Dave for a cracking ride (definitely some roads none of us knew) not to say an educative one ;-)) and to Ian & Tim for sweeping up in turn. 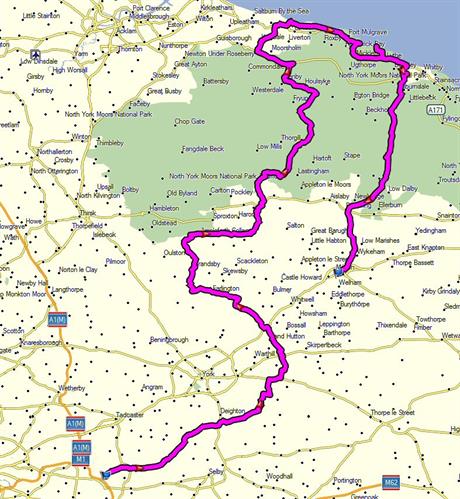