Posted on 15/01/20 |
3 x
Paul's first ride back with Team 5 this year and he volunteered to lead today, destination by the sea in Sandsend and when we have 40 mph winds where else would you go but via the Gliding Club at the top of Sutton Bank to take full advantage of them.

After a quick briefing 12 bikes lined up for the day's enjoyment.  Left out of Squires this time and left again down the old A1 before two further lefts to get us on the A1M.  Useful this way to get a quick trip up to Wetherby before getting back onto our normal roads by veering to the East of Wetherby and then taking a right past Thorpe Arch.  Travelling carefully along here to avoid exciting the speed cameras before turning left on to Rudgate.

It was at this point I received a tel call from Pete who was bringing up the rear, the call could be summed up with " where are you?" (I've made that more polite), it seems the marking went awry at Wetherby and we now had around three groups riding.  A couple more phone calls and a park up heading towards Cattal brought most of the group back together enabling a restart from there.

Over the bridge in Cattal and right took us on and over the A59 though Whixley and across the B6265 to take the lovely road past Queen Ethelburgers, past Little Ouseburn and then over the rattly bridge at Aldwarke.  On through Alne and over the A19 we found ourselves through Easingwold and taking a left over to Coxwold where a right turn towards Byland Abbey was followed by a left through Oldstead and then up White Horse Bank to the delights of the Gliding Club car park, basically slippy, knobbly and at all angles but we managed to get all bikes parked up safely.

One of our number however decided to park on nice flat concrete apron by the hangers, earning him an admonishment from a club official although  we didn't let on who it was!

After some verbal banter from the girls in the cafe we shuffled all bikes back out the car park and on for the second half of the ride.  Turning right on the A170 we took the next left to ride through the trees and down to Riveaux Abbey, up the other side of the valley and on to the Helmsley TT.  This was fairly traffic free and we could enjoy the lovely sweeping road all the way through Chop Gate before taking a right down to Ingleby Greenhow, nicely surfaced this road now the loose gravel has gone.  From here we swung a loop out over the moors and through the water splash (always one of these when Paul's leading) to arrive in Westerdale and on towards Castleton.  Did we turn left here towards the coast?  No Paul hadn't finished with us yet, crossing over the road and pressing on through Danby turning left just before Lealholm before picking up the A171 towards Whitby. 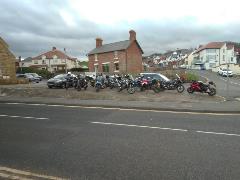 where remarkably we all managed to park on the little crazy paved area just across from the cafe.  After lunch and a fuel stop the return journey went via Littlebeck before picking up the A169 back through Pickering with everyone finding there own way home from the A64.


Thanks Paul for a great ride and Pete for bringing up the rear.  Picture of the route below. 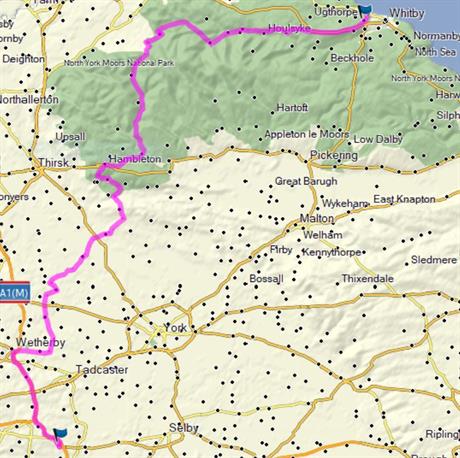