Posted on 18/02/20 |
3 x
There are quite a few things said about Cedric, some of them might actually be true!
One of them is that he always sticks to the national speed limit on the sort of roads we habitually ride but he rarely drops below that speed either ;-)
Another is that he just loves riding wet roads, particulary really muddy ones and judging by the roads we did ride when Ceders was asked to guest lead last Sat, proved the assertions above to be true.
When asked to treat us to a Ceders lead he asked where we were going, we said dunno, so off he set anyway to Manor Caf and would it be OK if we went straight there for a lunch stop, it might be a bit longer than usual?  No probs we said!
Right out of Squires and left twards Lotherton Hall where we frequently turn left onto B1217 and immediately right on to Aberford.  However, on this Sat the road was closed so a detour across the M1 and up to Aberford instead, across and up through Barwick in Elmet (of Steve Sirrell's Leeds Tyres fame), Thorner, Collingham, (loads of Kites to be seen soaring in the area), skirting Wetherby and Knaresborough via Spofforth (try prononcing that after a coupla sherbets) and finally to Boroughbridge.
Well it had been quite a long wet ride so far and some of us thought, perhaps Ceders was feeling a little thirsty and we would stop at the cafe called Plenty in the town. But no, we sailed passed it and headed across country to Ripon to join the glorious A6108, even been mention in RiDE magazine as a must road to enjoy in Yorkshire, which of course rolls and weaves its way up to Masham and eventually to Leyburn and indeed to Bellerby where the said Manor Farm Caf resides.
However, I knew what was in store for us when the junction marker indicated we should turn off right just over the Cover Bridge.  Oh yes, if we thought we had already sampled mud, wet and indeed gravel so far, in the words of some Bard of other "we ain't seen nothing yet!"
Definitely one of the definitive Ceders routes which we took on bravely and not without a little trepidation, the final push up to Bellerby bypassing Leyburn altogether.  Slide bump and skip, sloshing our way along narrow lanes crossing more major roads that would have served us perfectly well, we finally made it, covered in mud and thoroughly drenched. 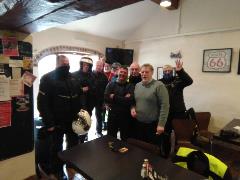 As we bumped our way into  the Caf bike park of uncertain terrain itself, Paul R turned to me and said, "That was fun!"  And so it was ;-)).  Lunch consisted of the very grub you need after a ride like that, not to be missed is a dish called Fully Loaded, you need to go their to fully appreciate this tasty challenge :-)
So thanks to Ceders for the unique lead and to Laurence for hanging on and bringing up the rear so to speak.

The author of this piece had to return to York after lunch so has no knowledge of the next tranche of the ride to Yorkshire Gliding club led by Paul, I imagine it would be a very similar kind of buggerment enjoyed in the first part :-))
Tootle pip
Pete

Here is the route of the first part, just ignore the leg going off towards York, forgot to reset the SatNav for my return DOH!