I had missed a few rides recently due to work commitments and the recent monsoon type weather we have been experiencing. This does not seem to bother Team 5 though. So, determined to get out this Saturday, I donned my wet suit and flippers and set sail for Squire's. (and yes- it was raining again!)

After meeting up at Squire's with other members, and chatting over coffee, 10 am soon came around and right on cue- the heavy rain. Pete, who had been at another table, skipped merrily over to the table we were at. ''Aha Phil, glad you're here. Fancy leading?'' he said cheerily with a twirl. Now, I'm not averse to leading a ride but unfortunately I'm not one of those skilled in the art of plucking a route from memory and just going. Me, I need to plan, maps, compass, spyglass, and at least a week to stress about it. Pete could obviously see by my blank, blinking expression that I was not his man today. As the rest of the table gave a similar response, Pete's reaction was 'Bugger, looks like its me again!''. He loves it really. ''We'll head to the flat lands to avoid the flood plains of Yorkshire and the weathers supposed to be better over that way'' he exclaimed... 9 bikes lined up for the ride, Adam would take on back marker duties for the day.

Left out of HQ, and on to the A1, to the M62, and off onto the A645 towards Eggborough. The rain had eased by now and there was blue sky ahead. The A645 eventually leads to the city of Snaith, but not today…. Poor Snaith is under water- ''ROAD CLOSED''. Quick thinking from our trusted leader saw us making a detour back onto the M62, a short blast and we were off and picking our way through Goole. The rain had actually stopped at this point and a big, yellow thing had appeared in the sky. Knows his stuff does young Pete. After Goole, we started to pick up some fantastic back roads that snaked across the open countryside. Although the roads were wet with large puddles in places, views into and around bends were excellent, so some good progress was made. It was nice to be able to stretch the bike's legs. This series of roads saw us looping down, across and back up along the river Trent towards Gunness and Flixborough, where Pete knew of a Cafe for our T&P stop. It was called Milly's Café. Unfortunately, on arrival we found it closed. ''Clucking Bell!!'' said Pete, ''The guy said he was open till 12.'' The group looked on, cross legged, and thirsty. A cafe was needed… and quick.

It was at this point I remembered a bit of clever tec that the bike came with called a sat nav which had the capability of finding cafés, how cool. ''I've Got one 2 miles follow me'' I set off using my best advanced riding style as I had three observers a masters and two trainee observers behind me, no pressure then!. A little worried that this establishment may also not be open. As the sat nav said you have arrived at your destination I was relieved to see an open sign on the door. I was about to dismount when I realised the others were not. I looked again at the café and then at the sign above the door, it read Hair Salon !… Twaz not a café no more… What! Nooooo, Poo. A fail. ''That's ironic''  said Dave (the one with the big bangers and mash!) ''been that your the only one here that doesn’t need one''. How we laughed. I may be follicly challenged but I still have feelings you know.

After Pete and Steve spoke with a few locals we were informed of a cafe by the Humber bridge. Although we were not too far away this challenge proved too much for some who decided at this point to go their own way and so we were down to six. 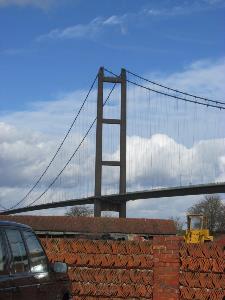 Pete made his way in the direction indicated and we soon were able to see the bridge rising in the distance. We had perfect clear views over the Humber estuary with the tide out and the sun glistening off the water it looked amazing. With a stop at a local post office just to confirm we were on the right path we headed for the bridge.

A Little History Lesson. The Bridge was the worlds longest single span suspension bridge when it first opened to traffic in 1981 taking 8 years to build, it held this record for 16 years. It still remains the longest in the world that can be crossed on foot or by bicycle. Oh and Bikers cross for free. 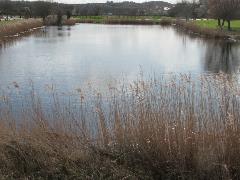 Our Café came into view The Old Tile Works. We filed into the busy café, first Stop the Loo!. A nice place . Not the loo, the café. A bit on the pricey side though, cries of how much and its only soup! It was good quality grub though and much needed, think I ate my jacket spud in one hit.

The Day turned out well in the end with an entertaining ride and sunshine to boot, what more do you need.

Thanks to Pete for leading once again. I have great admiration for those that can do this off the cuff. And thanks to Adam for acting as rear gunner for the day. 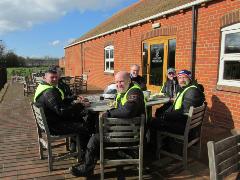