It was a relatively dry day that resulted in ten riders turning up for today's ride.  I was distracted with other things at first at Squires so when I eventually joined the group Phil Marshall had "volunteered" to lead the ride, destination to be Whitby with a T&P stop at Miles cafe in Pickering, Alan Riddington was tasked with Back Marker duties.

After lining up off we went turning right out of Squires and down to the lights in Sherburn turning left towards Tadcaster.  So far so good but as a couple of late comers had been caught out with the floods at Cawood (and passed us on their way to Squires) their late arrival necessitated a turn around for the Back Marker to collect them and that coupled with the lights at Sherburn meant we were quickly split into two or three groups.  Not a problem you would say as "second man drop off" would mark the route however the previously noted "arrest" had different ideas.

As we approached Barkston Ash there was a very slow moving queue of traffic, a couple of vans in the queue were blocking a view so we couldn't see if it was a cyclist or horse perhaps.  Eventually traffic started to overtake the leading car and it soon became apparent there was no obstruction just a very slow car, as I overtook it and looked in I could see the driver waving his head around.  By the time our tail enders reached the obstruction another driver had stopped and approaching the slow car he quickly opened the door and reached in turning the engine off and removing the keys, it was apparent by this time the driver was under the influence of something and three of our number stopped to assist.  The struggling driver was held down, the police were called and it became apparent the with statement giving and such like the three riders were going to miss the first half of the ride.

halted the ride and regrouped we'd left Tadcaster and were headed for Bolton Percy.  Alan briefed us on what happened and we resumed from here through Bolton Percy, Copmanthorpe and Bishopthorpe where we dropped on to the A64 for a short hop before taking the A19 to Crockey Hill.  Left then through Wheldrake, Elvington and Sutton on Derwent then Melbourne before arriving in Pocklington and finding Miles cafe on the other side.

Whilst enjoying tea and some very large pieces of fruit cake another phone call determined our three heroes were on their way and we decided to wait for them.

After regrouping and two of our group departing the rest of us set off for the second half.  Turning left out the caf we travelled a circuitous route through Fangfoss and Full Sutton (suppose we could have dropped the waywood driver off here? Save all that court expense!) we did a short stretch on the A166 before turning off towards Buttercrambe.  It would be understandable to think we were going to enjoy Buttercrambe TT at this stage but no Phil had other ideas, crossing the TT road we headed to Scrayingham but eventually we rejoined the TT for a bit of "making progress".  Rather too much progress as it turned out as our leader missed a right turn and behold, the U turn is back!!  Retracing our steps and then turning left we travelled along a myriad of the twisty roads around here ( a bit of grass and gravel along the way but were used to that aren't we?), eventually changing our heading at West Lutton and heading back to cross the A64 by Scampston Hall.

This took us on the lovely twisty roads via Yedingham  and across to the A170 at Allerston, here a left took us to Thornton Le Dale and a right past Dalby Forest before stretching our legs on the A169 all the way to Whitby and Whistle Stop cafe.  After (in some cases) a weighty  lunch the group split into two to head various route home.

A fabulous ride Phil and full of excitement and thanks to Alan for bringing up the rear. 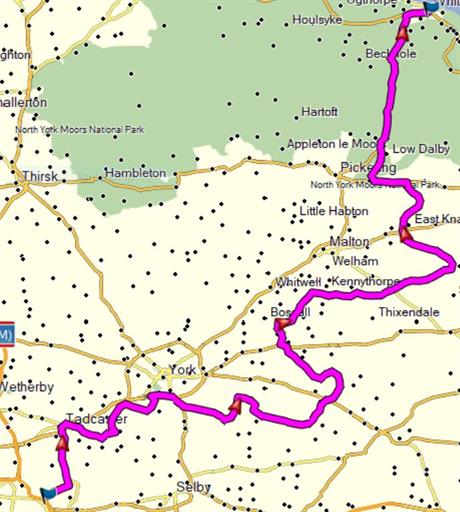