Posted on 08/08/19 |
1 x
Six T5 ers lined up for the ride briefing from Mark and after Steve Harrison volunteering for back marker off we went.

Turning right out of Squires we headed through Sherburn and on towards Cawood.  On the way we passed the burnt out shell of a Citroen at the side of the road, this had been well alight when I travelled to Squires a little earlier  and it was amazing how quickly it must have burnt through and was now left on its own.  Through Cawood and on to Escrick where we made two right turns to follow the road out through Skipwith, crossing the A163 and joining the A63 at Cliffe.

As Mark had pointed out earlier this is the scenic bit of the A63 through Hemmingbrough and Brackenholme before pulling off left to head into Howden.  It was here that things took a strange turn as Mark pulled in to the backyard of a pub, as we had only been 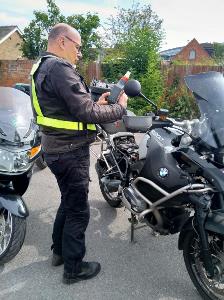 going for less than an hour it was a bit early for a tea stop.  All was revealed as Mark said his oil level warning had come on and he disappeared into an outbuilding and returned brandishing a bottle of oil, apparently he keeps his bike here.  After a brief pit stop (not as slick as the F1 guys although after Hamilton's debacle at the German Grand Prix maybe it was!) we were on our way and then had to negotiate a road closure, easily done with Mark's knowledge of Howden and finally we could leave Howden behind.

After crossing the A614 we carried on along the B1230 over the M62 and through Gilberdyke and on to North Cave.  Skirting North Cave we then turned right off the B road and through Riplingham before joining the A63 again, on the dual carriageway this time but only briefly as we turned off at the next junction for our T&P stop at the Humber Bridge Country Park, under the shadow of the bridge.

Suitably refreshed we rejoined the A63, to get to the East Coast from here you have to 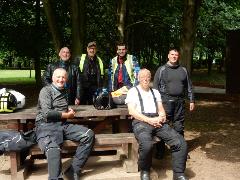 get passed Hull which involved a bit of a trawl through the traffic but we were soon at the other side passing through Hedon as the fun resumed.  Through Burstwick and on the B1362 all the way to Withernsea where after quickly passing through we started on the even more fun roads up to Hornsea.  The B1242 is the road all the way up to Hornsea passing through Roos and Aldbrough and it is a perfect biking road.  The surface is great with some lovely twisties many of which have clear cross views and whist there was some traffic it is quickly dispatched, the only disappointment being that Hornsea arrived too soon and our lunch stop Sullivans for fish and chips.

After some lovely fresh fish Mark had a final leg of the ride to take us on to Fimber Cabin cafe heading out of Hornsea on the B1244 passed Hornsea Mere, through Seaton before turning right on to the A165 to Brandsburton.  From here we took a small narrow road across to North Frodingham and picked up the B1249 to Driffield, through the town and out on the A166 to Garton on the Wolds before turning right on to the B1252 to Sledmere.  From Sledmere it's down the lovely twisty hill to Fimber Cabin.

Thanks Mark for a great ride and Steve for back marker duties and not a U turn in sight.

Picture of the route below.