Posted on 19/01/20 |
3 x
Cold overnight temperatures had probably restricted the number of bikers arriving at Squires this Saturday but never the less ten T5 ers were up for a ride.  Phil Marshall volunteered to lead and said he had a route to Hawes Creamery calling at Masham for a tea stop on the way.  Lawrence Turner offered to act as back marker wearing the distinctive orange vest that makes spotting him in the distance so much easier.

Following the briefest of briefings ( more of which later) all lined up and set off turning right out of Squires and heading into Sherburn for a left turn at the lights and a run down into Tadcaster.  It was during the line up that Phil told me he had forgotten to mention his plan to travel one junction on the A1M and decided he'd better inform Lawrence.

Out of Tadcaster on the A659 running through Boston Spa and on to the A1M roundabout.  Marking was good at this stage but unfortunately traffic and traffic lights had stretched the group meaning three of us were a kind of advanced party with the balance of the group without sight of the lead.  Marking would normally overcome this but as we all know stopping isn't allowed on the Motorway and certainly not on the northern Wetherby exit slip road which isn't blessed with any hard shoulder.  Unfortunately the three leading bikes exited here with the balance riding past.  After a call to Paul Rushton we decided as they were quite a way up the Motorway he would lead his "group" to Masham whilst we carried on with Phil's plan, the first time I think we have had a dual route plan!

Continuing Phil's route we headed along the lovely road from Wetherby to Knaresborough through North Deighton before turning right on the A59 and then left through Flaxby and Coneythorpe.  Keeping on this route through Stavely and Burton Leonard we turned right on the A61 at Wormald Green and heading off up to Ripon 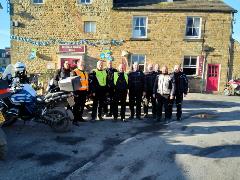 where avoiding the centre round the ring road we eventually picked up the A6108 towards Masham.  A lovely sweeping road this and with the sun behind us it was a glorious run up to Border House Tea Rooms where we arrived at more or less the same time as our "other" group.  Needless to say there was a fair bit of banter over tea!

Refreshed we mounted up for the second half of the ride with another speedy sweep up towards Leyburn turning left just outside towards Wensley and then a right and left heading towards Redmire.  This quieter road to Hawes is a nice twisty route and at the moment has a few temporary "Ice" warning signs on it, however my temp gauge was reading 6C and much of the road was beginning to dry out now making for a very pleasant part of the ride.

A few miles down here and after passing through Askrigg we made a left turn dropping down into Hawes and round the cobbles up to the creamery.  Despite the weather it was quite busy in here, most were in the shop and restaurant rather than the cafe so we were easily able the get seated and enjoy their, as ever, excellent soup.  There's also the opportunity for "seconds" in the cheese sampling emporium and buy some of their excellent cheeses.

Phil had a further plan to complete the circuit back round to Pateley Bridge via the Ribblehead Viaduct but some (including your scribe) chose to head off back home from here.

Many thanks Phil for an excellent ride and to Lawrence for back marker duties, copy of the route below. 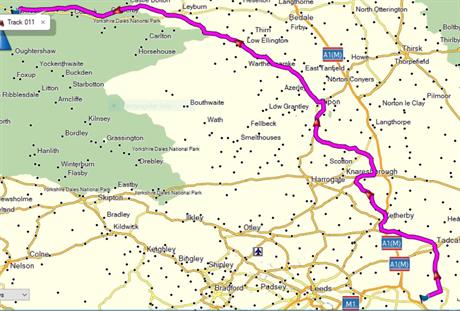