A low turn out at Squires today with lots of regulars away on other commitments, Both Rides having Low numbers, but undeterred 11 riders set off on the TD ride to Masham, Ian McNeill doing a Check Ride before leaving us at the T&P stop.

After a quick Brief we lined up at the Gate for a Left and the usual route from Squires to Bramham ( unbeknown to me Paul Dobson joined the ride at the last minute ) before turning Left to head toward East Rigton and through East Keswick before joining the A659 to Harewood, a Right at the Lights and down Harewood Bank ( no Buzzards around today ?? ) and staying on the A659 we headed into Poole in Wharfedale ( My claim to fame being I worked on the Electrical Installation on the the then new Build Retirement Flats just past the White Hart Pub, and there still standing and I presume still have working Electrics ).

Onwards over the River Wharf before turning Left onto the B6161 and and then Right for Farnley and the run down to the very empty Lindley Wood Reservoir, ( we need some rain soon, the water level is very low ),  then the climb up the hill heading toward the Sun Inn and the A59, But before then we turned Left to drop down to Fewston Reservoir, ( another very low level, with Fly Fisherman standing on the banks which would normally cover them in water ) before turning Right at Fewston and the road out to the Cafe/ farm Shop, only to find the Gates locked, signed saying closed until the 22 May, after a quick walk around we agreed to head off to Pateey Bridge, Ian and 3 others dropping off at this point ( sorry Guys, didn't know it was going to be closed ) as they had commitments to go to and time was limited for them.

So off we go with a Right onto the A59 before turning Left passed Menwith Hill and heading to Darley, I spot the rather splendid looking 'The Wellington Inn' public house, with a late decision a Left into the very large car park and a T&P ( Latte for me ) stop, with a very large garden area and picnic tables we sat outside in pleasant weather enjoying the surroundings of this unplanned stop, so much so I forgot the team picture ( must be an age thing ), but we know who we are.

After the rather long stop ( pleasant surroundings make time fly ) we mount up for part 2 and the run up to Masham, left out of the car park and off we go on a very rough section of the B6451 ( if your using this road be aware just after the Inn the road has big sections of tarmac missing for about 500 metres) and off toward Sommerbridge and onwards to Risplith, ( fields full of lambs enjoying the nice weather ) and Kirkby Malzeard ( where do they get these names from ?)

Historically part of the West Riding of Yorkshire, the village was mentioned in Domesday Book as Chirchebi (meaning "church village"). The suffix Malzeard (another place-name, meaning "bad clearing" in Norman French) was added by the early 12th century. In medieval times the honour of Kirkby Malzeard included large areas to the west of the village in upper Nidderdale, and the parish came to include several townships.

There you go History lesson included :) .

Off up to Grewelthorpe and then Left across to Warthermarske,

(The hamlet used to be known as Wardenmask and its name derives from Old English with a Scandinavian influence; Wardonmersk which means Marsh at a Watch-Hill. ), and the drop down the hill into Swinton before the we enter a very busy Masham, ( a Wedding obviously arranged for during the afternoon ), we meet up with Observers and associates for a well earned lunch ( Kate explaining she was starving ), Thanks to everyone who joined the ride in warm pleasant weather, and to Dave Mitchell for keeping the group together, given the amount of riders leaving / joining the ride, well done. 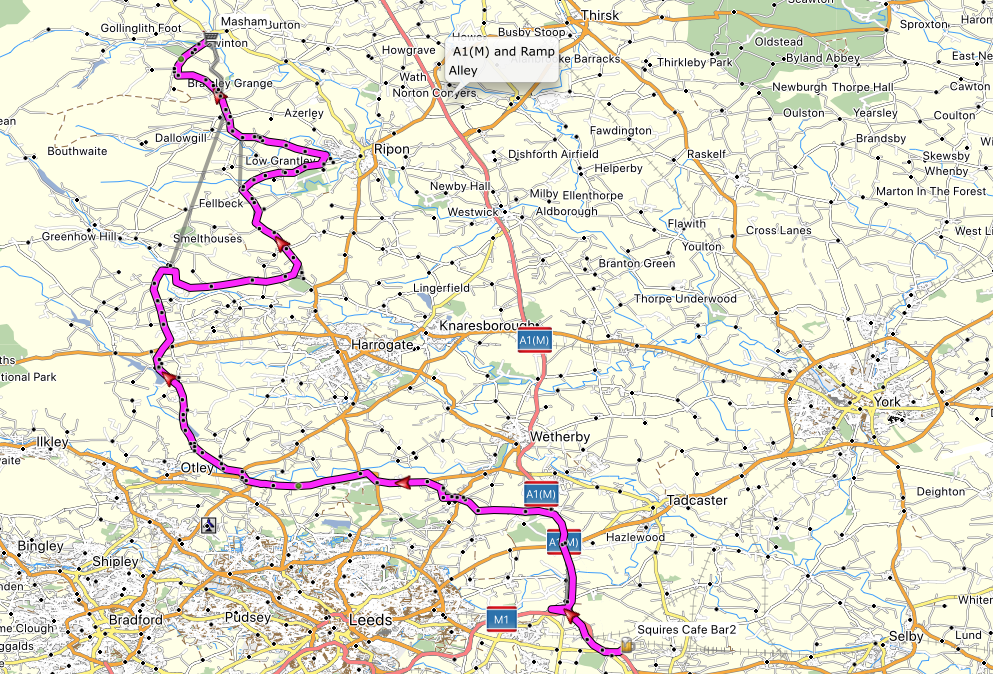