Posted on 30/06/19 |
2 x
The day was forecast to be the hottest of the year so far, mixed blessings for motorcycle riders but in the event around 20 Team 5 members turned up at Squires with a virtually 50/50 split between TD and OD rides.  It's also that time of year when the "Let's Dress the Roads" virus seems to infect all local councils but more of that later.

So it was that after the ride briefing 10 bikes set off on Phil Marshall's "virgin" Team 5 lead.  Turning right out of Squires we took the usual route left in Sherburn and down to the end with a left and right into Aberford.  Turning left in Aberford we headed through Barwick in Elmet  and Scholes before crossing the A64 towards Thorner and on through towards Bramham Park.  Passing Bramham we carried on towards the A1 before turning left just before it onto the A168 towards Wetherby.  In to the town centre we travelled before exiting on the Sicklinghall road past Barrowby and through Kirkby Overblow to pick up the A61 towards Harrogate.  Busy road to turn right on this and while most of the group got out en mass your scribe, who was also back marker was stuck for quite a while before a suitable gap emerged. 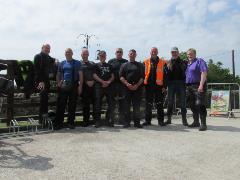 right on to Norwood lane.  We turned right at the end of here and then immediately left to cross Swinsty Reservoir before arriving at Fewston Farm Shop for our T&P stop.  Good value for money here with Tea at £1 per cup!

Suitably refreshed a couple of our number had pressing business to attend to while the balance of the party turned right and then left on to the A59.  Just passed Fewston Reservoir we turned right on to Hall Lane and followed this road for some while passed Thuscross Reservoir before picking up Greenhow Hill through Hebden and into Grassington.  Through Grassington we turned right on to the gorgeous road down to Kettlewell, it was a bit busy with traffic on a glorious day like today but it was soon "catched, matched and dispatched" in true masters fashion whilst we revelled in our enjoyment down to Kettlewell.  In Kettlewell we turned off to go over Coverdale, great I thought the road surface was resurfaced here for one of the Tour Du Yorkshire cycle races and it will be pristine.  When we arrived at the "pristine section" we were met with a classic example of "Let's Dress the Roads" virus with gravel spread over the whole of the resurfaced road.

Before we reached the end of Coverdale we turned left at Melmerby and over the top (tricky bit of road in places this) to pick up the A684 at West Witton, turning left towards Aysgarth.  Just before Aysgarth we turned right towards Askrigg and it was around here we began to notice a proliferation of Vintage bikes scattered around the roads.  We got tangled up in a group of these on the climbing hairpins just after the turn with one if them unfortunately stalling right on the hairpin.  Whilst he managed to keep upright he was now blocking the middle of the hairpin making it a little trickier to get passed.  We carried on to pick up the B6270 through Muker before turning right up to Tan Hill.  On arriving at the pub the outside was packed with Harleys and vintage bikes, some with sidecars, 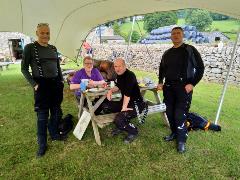 many of which we had to negotiate passed on our way down towards Reeth.  A delightful road this all the way to and through Reeth where we arrived at our lunch stop, The Dales Bike Centre.  It was getting pretty hot by now and we were grateful for some outside seating under one of their large sun shades.

After lunch a discussion of how we were to get back resulted in a further group ride over the Tank firing range into Leyburn and down through Masham, Ripon and Boroughbridge with bikes departing at various points en route.

Thanks Phil for a fantastic first ride lead for the group, a taster of many more to come I'm sure. 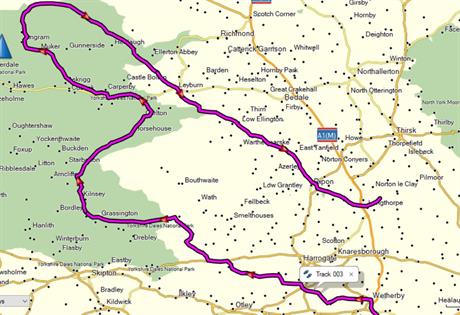