Hot Sunny Weather was forecast for the Day, and it didn't disappoint with temperatures up to 24c and wonderful Sunshine to make a change for a T5 Ride, as 14 Happy Chappies set off from Squires ( Missing was Dave Hardcastle, get better soon, but we had a new T5er join ( Another Pete ) us for his first ride out ),  A Right out of the gate and off at a good pace, we go through Sherburn and out and over the  by-pass roundabout before taking Left at the next one to Church Fenton, Then a Right to Ryther and Right again on the fantastic twisty road out to Cawood before the usual route through to Escrick and Wheldrake, and then we headed out to Skipwith, and a left to Bubwith before turning Left onto the B1228 and back toward Melbourne ( The English one, not the other in OZ ) before a Right out to Alerthorpe.

All well travelled roads for T5, but the excellent weather meant everyone was enjoying the morning heading for Pocklington, on arriving at the roundabout with the A1079 the Traffic was really Heavy, queuing to go on toward York, luckily we were heading into Pocklington so a good clear run for us, for the Left – Right – Left down to the Mile Cafe for a T&P Stop, filling one side of the car park with an impressive line of T5 Bikes. 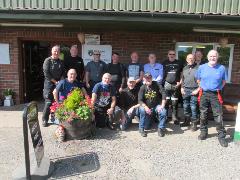 With everyone suitably refreshed, the Team Piccy taken by a kind member of staff we gave PETE ( The Old one ) his 10 minute warning as we got ready for part 2 , the Cafe Staff videoing our departure for there Face Book page, and the ride over to Sutton Bank, so off to Millington and up to the A166, turning Left toward Stamford Bridge then taking a Right at the top of Garrowby Hill onto the Roman Road toward Malton, here we got stuck behind a Tractor and Corn Cart, taking up most of the road,  careful overtakes were needed, some of us getting passed before he turned off, and then the long down hill section before a Left to Leavening and the Buttercrambe TT.

A Left toward Buttercrambe on the rough surfaced road and off to the Narrow Bridge section which saw car drivers panic as to whether the car would ( its so funny to watch them try miss the buttress walls ) and after a bit of  a wait we eventually go through Buttercrambe and out take a Right heading through Claxton ( Pete's village apparently – no wonder he's rich if he has a village :)>)>) ) and out to the A64, a good move for us to do a Left then a Right as the traffic on the A64 was heavy in both directions, and out to another rich Yorkshire man's abode of  Flaxton ( which is Chris's village !!! ) must be something about North Yorkshire ??, anyway Sherrif Hutton was next ( The place of really expensive Sausage Rolls ) then a Left to Whenby and along to Brandsby and up to Ampleforth, here a Left Turn took us to Wass and then out to Byland Abby.

In October 1322, King Edward II was at Byland Abbey when the Battle of Old Bylandtook place. The marauding Scots caught Edward so unaware, that he fled to Yorkleaving many precious items behind.
In the late 12th century the abbey had a complement of 36 monks and 100 lay brothers, but by the time of the dissolution in November 1538, the abbey was host only to 25 monks and an abbot. In 1539, its site was granted to Sir William Pickering.

History lesson over, and a Right turn under the old Arch Bridge and away toward Oldstead and over the hilly section getting air under those wheels, before the Right ( oops - I was going a tad too fast to make the Right ) a quick 'U' Turn for me and Steve Harrison,and the run up White Horse Bank and into the Glider Club for the well earned Lunch stop.

Thanks to everyone who followed me as there leader, and to John Coe for keeping the back of group in check, it was a fun day with a good pace kept by all, made better with the weather being dry, sunny and hot for a change..

Here's the the route: 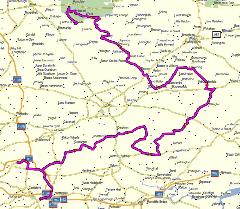