Posted on 25/06/20 |
0 x
Well what a cracker!  It had everything, scenic views, challenges, bends, the odd straight bit and it had pace, yeah it did have pace.  And of course it was one of the inaugural rides of the new Covid regime!
Mark had been on the verge of leading with 'encouragement' from other T5ers, "just have to sort the routing on my SatNav" he said.  Well guess wot, he did!
12 T5ers congregated at, or rather near, Halfords in Pontefract, Al Riddington said he was going to Flamborough Head and Mark, Runswick Bay and the 2 teams of 6 fell quite naturally.  Just as we were about to set off, Mark Rodger turned up looking a bit bemused, he swiftly elected to go with Al and we all slid out of the Industrial park to go our merry ways.
Of course normally getting out of Ponte can be a bit of a trial but because of the Covid thingy, there was minimal traffic.  We headed towards Ferrybridge, it was alleged there was the first U-turn, and joined the A162 to .... Sherburn, skipped around it and rolled along the familiar road to Cawood, Wheldrake and Sutton on Derwent, weird it was just like coming out of Squires but not!  A wide sweep round to Stamford Bridge and through the woods to emerge onto the A64 eventually, the up to the Castle Howard road, fun in itself stopping in a far corner of the Castle Howard car park, which was pretty rammed I have to say, for a T&P stop, well T anyway from our flasks.
Good spot really and a P could've been had up at the garden centre?  We weren't' quite sure :-(
Refreshed we set off across the CH estate passed the great lake and wiggled our way to Amotherby, oh those great sweepers up to almost Kirkbymoorside, we set off with a will but b****r, grit, why have they waited for traffic to start back on the roads to re-surface them?
Anyway we hung a left to join the A169 briefly turning into the Steam & Moorland Garden Centre for a P there instead.  Thence through Pickering to gain the North York Moors but by what we call the back way over the Moor to Stape, Egton Bridge and via the whole gamut of Moor's terrain (great fun) to Runswick Bay and a generally less well known small car park overlooking the magnificent bay.

We even had a the use of a couple of benches to chomp on our packups, suitably Socially Distanced of course ;-)
The return leg over the Moor but down to Hutton le Hole was a delight of untrammeled riding, virtually no other traffic, through Lealholmside to Rosedale Abbey, up Rosedale Chimney, of course, skirting Kirkbymoorside and back to the Amotherby road, still blinking covered in gravel :-((  BTW another U-turn was executed from Amotherby and back and then we were thinking that we would cruise down to Sheriff Hutton and then to the York ring road to split up, but no, Mark suddenly swung right in SH and the absolutely wonderful wiggly to Stillington was executed by all with total relish, pacey or what, what a brill way to conclude the ride!
Thanks to Mark for such a cracking 'maiden' lead and to the gang who rode their socks off ;-)) 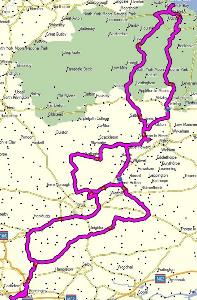