Posted on 03/08/20 |
1 x
It must've been a record!!
But we'll cover that in a minute after we've covered the mitigating circumstances....or not ;-)
Ride # 1 was down to Paul R and because it was obvious a backup leader would be required he "knocked up" a route via MyRoute App and sent it to Chris who loaded it up and noticed several quite big U turns, so smoothed them out before sending it to Mark.
All met @ Monks Cross, suitably Socially Distanced and Mark's team left about 10 minutes after Paul's.
Briefly on and off the York ring road we rode on the more minor roads to Brandsby, up the hill and hanging round the sweeping left hander (the camber is all awry on this bend and you usually think, I could've taken that quicker) and down to Coxwold.
Straight  through and joined the A19 eventually, such a good road that, all bends and corners, fast & slow, to swing around Thirsk and up the jolly old A168 to Northallerton, always a pleasure, relaxed with only fast sweepers to enjoy.
Now Northallerton can always be tricky and with the centre of the town blocked off the very tedious round to get to the other side had to be endured.  But we battled through and hopped onto the glory of the B6261 to Richmond, surely we all know this one and with no real traffic challenges, yabba dabba do!
We diverted from the Richmond road to Scorton where there is a truly splendid huge green where we parked up and enjoyed our morning coffee etc.  We thought we might see Paul's lot somewhere there but no, so assumed they'd been and gone, and then, and then, along came Paul with team in tow, we were on the verge of setting off again so did, around the Green and with suitably gestured waving, swept past and made for Richmond via Scotch Corner to visit the amenities ....no chance, not an inch of concrete was visible, rammed or what!
We made it out of Richmond eventually by a route that was not on the SatNav, I think, but great country riding, don't think it was known to anyone.  Joining the B6270 at Reeth, probably the road we should've been on, which is a lovely ride, quite narrow and shaded but what undulations!  Anyway it was on this road we were suddenly ambushed by a bunch of hooligans on bikes who actually overtook us one by one, no chance to keep the 2nd rule, Mark, who is no slouch, had been waiting to overtake 3 cars, pulled in at the first safe place and they disappeared, blimey I thought and I'm sure the rest of the group did too. 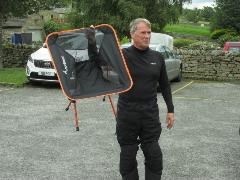 Somewhere along the route we did stop in a village to have our packup lunches and this was where Alan produced and demonstrated the folding chairs, pretty impressive :-)
Sweeping down though Askrigg and Hawes, Horton in Ribblesdale and Settle, we cruised down to Malham, still absolutely stuffed with cars, walkers, cyclists, where are they all going to go I wondered, it's only a little spot?  Eventually after curving, sweeping 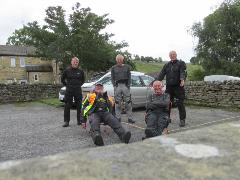 and bumping we actually joined the A65/A59 almost to Harrogate, now I'm not that keen on A roads for a T5 run but actually it was almost a rest after working/riding pretty intensively all day.
Skirting round Ripley we took the back route via Arkendale and Aldwark Bridge to the meeting place to fill up with juice ready for the next ride!
Oh yes the record?  I think we lost count of the U-turns after 6, well done Mark and also of course for leading with so much flair and curiosity ;-))
A great day's riding with Favourites mixed with the Unknown.