Another fine spring type day was forecast and Graham West volunteered a route south for way of a change as 9 Riders gathered for the briefing prior to a slightly late depart, (waiting for Graham to finish his coffee) for a 75 minute 1st leg of the ride, We formed up at the exit with Tony Burns keeping an eye on things at the back, off we go with a Left out of Squires up to the Old A1 and a Left Milford Farm saw us heading through Lumby to the A63, a Left toward Selby and then a Right at the roundabout and a quick Left to Hillam, through the village and a Right to Birkin, over the narrow bridge in Beal then heading for Kellington, a Left onto the A19 before a right took us round the back of Eggborough power station, not an often used piece of road, toward Snaith & Goole.

While marking the junction for a right turn, an unfortunate rider ( John) hit an unseen grass covered tyre rut and lost his balance managing to get himself stuck under his bike, thankfully Tony, (Being big and strong – well strong) was able to pick up the bike so the rider could extricate himself and remount to carry on, no real damage to rider or machine, apart from dented pride.

Using the ring road at Goole saw us leave toward Goole Flats and Swinefleet and the marvellous twisty A161 ( with great views over the fields for good overtakes) route to Crowel. This is where a Car Driver took great delight in overtaking all the riders, while breaking the speed limit to accomplish said overtakes on the straight road out of Swinefleet, only for all the riders to repay the overtakes on the twisty section, all within the speed limits, as he was stuck behind slower drivers and obviously not confident on the overtake opportunities available to him, ( straight roads only for him then).

A right turn in Crowel saw us take a route on narrow back roads over the Stainforth & Keady canal and on toward Sandtoft, with a left at the roundabout, past the Tram Museum and a short run up toward the Airfield with a right turn into the airfield car park and Cafe, (75 minutes was actually 95 minutes – not that we were counting – Yes we were, but Graham said his original route was a bit short !!), The Cafe was full of cyclist's topping with food fuel ready for the their next peddling session, Team5 were topping up with food, well, just because we could.

Part 2 was a 90 minute run to the Sails ( Windmill ) Cafe at Skidby near Hull,( it gets a bit messy now), Steve Harrison now covering rear marker duties, as Tony had to leave due to prior commitments, we were joined by Paul Rushton + 1( sorry forgot his name) as he had been involved in a check ride on Part 1, so now 10 set off with a right out of Sandtoft, Beltoft and the River Trent and the splendid Girder Bridge at Gunness, ( we see a lot of this bridge in the next 30 minutes or so), so over the Bridge and a right turn onto the B1450 toward Butterwick, the River Trent still on the right we then take a left followed by 3 successive right turns, that saw us head back toward the Bridge, 'U TURN 1', a left turn back over the bridge, with a quick Right turn onto the B1392 saw us heading for Keady and Amcotts passing the 'Take a Gander' pub, a few turns later and we pass the 'Take a Gander' pub from the opposite direction, 'U TURN 2' , a quick stop while Graham tried to sort out the pink coloured spaghetti trail of roads on his Sat Nav, Paul Rushton stepped in with a route to the Sails cafe.

So with Paul now leading we go Back over the Bridge, but now carry on toward Scunthorpe, On the outskirts of Scunthorpe we take a left onto the A1077 and a decent route through to Roxby and eventually pick up the A15 and the Humber Bridge, with nice sunny weather the views from the bridge were splendid, once across the bridge we

picked up the A164 Beverly road, as well as few lone bikers who looked a little confused at the group, before leaving us at various points, no doubt wondering what was going on, we then regrouped at our last junction so Paul could lead us into the car park, only for ( yep!U TURN 3 ) as we had gone into the car park for the Hotel next door to the Cafe, so out we go, so we could park on the road near the Cafe entrance, there car park being very gravely and uneven, here John Coe bade his farewells as he had commitments and we were a little ( a lot ) behind schedule.

It was an unplanned long Part 2 ride, (maybe 2 hours, I had lost track of time and was fading fast due to lack of food), but it was enjoyed by everyone as discussed with plenty of banter over splendid lunches, All enjoying the sunshine out in the courtyard. The team split after lunch with some electing for home while others set off for Fimber, ( who had opened up due to the warm weather). Thanks to Graham for an excellent Part1 and Graham & Paul for an excellent & prolonged Part 2, and Tony and Steve for covering the rear marker duties. 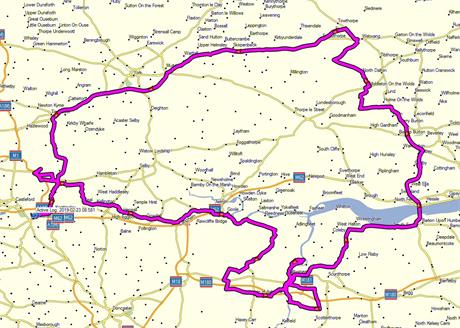