An early start for all as the Annual Team5 meeting was to start at 8:30am, and even at that time it was a good show from the Team5 members ( a few sneaking in near the end 'TIM' ) ..... 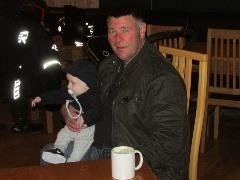 Here is a piccy of our newest potential recruit courtesy of his Granddad, our very own Steve Harrison :-)


.....before the 2 ride leaders gathered the respective groups for the briefings, ours being the OD ride with Chris Otter giving 8 riders the approximate route we would be travelling, Ian McNeill doing rear duties along with Dave Burton, who was fitting in his Bi-Annual Check ride, but with such a little group marking was minimal as a decent pace was maintained through out the ride.

The usual Right out of squires and toward Towton via Saxton before we turned Left into Sutton and across the A64, left toward Bramham and well, a new route through Bramham ( even the locals looked surprised ) as we took a route along the very narrow Vicarage Lane, around the pretty Church with all the trees in full blossom, before turning right onto Clifford road then a left onto Willow Lane and eventually arriving at the A659 to turn left toward the A1 / Collingham / Wetherby roundabout having missed all the traffic chaos of Boston Spa ( Brilliant ).

Into a busy Wetherby and through the town centre then a left to Sicklinghall, Clap Gate and onto Kirkby Overblow, to pick up the A61 to Panel, but then a left toward Burn Bridge before another left to Breckenthwaite and Beckwithshaw (wish we had villages with short names !). We then had a scoot past the Army foundation Collage on the outskirts of Harrogate before crossing the A59 and heading toward Hampsthwaite before turning left to Burstwith and Darley and getting onto the B6451 to Dacre and a right onto Dike Lane and across the tops to Nought bank Road and the drop down the Steep, Twisty route to Pateley Bridge and the difficult turn into Teacups Tearooms car park, ( Laurence struggling not to drop his new bike ) due to the raised curb and tight right turn needed, but everyone arrived unscathed after what was agreed by all as to have been a brilliant 1st leg of the trip to Hawes. 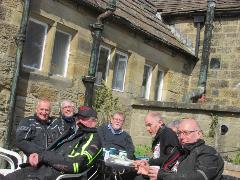 The T&P stop was another highlight with everyone sitting outside enjoying the warm sunshine on plastic patio chairs and a couple of glass topped patio tables, But then as Pete arranged his camera for the team Piccy (Laurence's new bike acting as a camera stand ) and once Pete was flashing ( his camera ) his mad dash to get into his seat and shot, caused his chair to topple backwards and everyone then try to catch all the Cups and Crockery trying its best to head floor wards of off the Patio tables, with no one actually looking at the camera, but it did raise the dangers of being in the same area as Pete.

Part 2 of the ride was now getting ready to depart , Ian McNeill leaving us for prior commitments ( probably thought it would be safer away from us all after the photo chaos ) so 7 riders set off out of Pateley Bridge with a left up the Red Brae Bank hill ( B6265 ) and off toward Stump Cross before turning Left to Appletreewick, Burnsall and Threshfield ( Nice twisty route but cyclists abound so care is needed ) to pick up the B6160 to Kilnsey and Kettlewell, out to Buckden and a left onto the beautiful valley route of  Deepdale following the River Wharf, seeing lots of people enjoying picnics and the scenery on this section of the route, before heading forever upwards as we go over the tops of Dodd Fell Hill, the sunshine and warm weather making it a lovely ride and Lambs aplenty to keep you smiling inside your crash helmet as they are laid out sunbathing / sleeping or chasing mum for a feed. 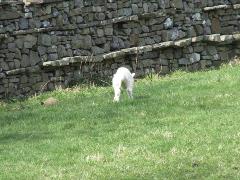 Over the blind summit ( Chris dodging a car he could not see until the last minute ) and the the long downward stretch to Gayle ( eyeing up the wide Ford on the way down – Wondering mmmm!!, but no) through Gayle and the Right turn into the Wensleydale Creamery Car Park and lunch taken outside again in lovely warm sunshine. 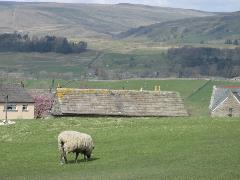 Pudding was to be the normal while near, so Brymor Ice Cream it was, Led by Dave Hardcastle, heading toward Leyburn before a Right taking us past The Forbidden Corner, Middleham and Brymor's.

Thanks to Chris for a Great Day's ride out in lovely weather and Ian & Dave for rear marker duties.
Here's the route: 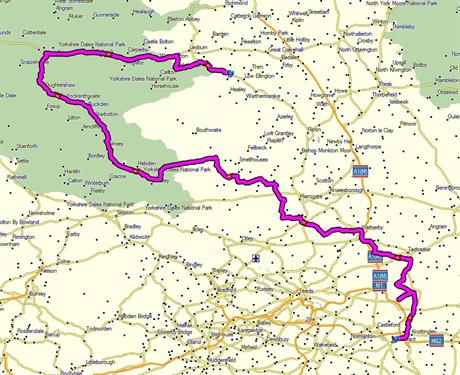