With a lot of YAM Members away doing various trips, commitments it was a small turnout at Squires, but 7 riders selected the OD ride for their Saturday Ride out.

After a quick brief we lined up at the exit, taking our time getting ready as a lot of different groups were leaving Squires for various destinations, We took a left out of the gate then headed to Ledsham before looping back to the old A1 Great North Road and a Right to Fairburn, Brotherton and left to Birkin and our first encounter with the dreaded signs of 'Road Dressing' or the cheap way of trying to keep our roads in ½ decent condition, undeterred we turned Right to Beal before heading over the M62 and Crudling Stubbs, Wormsley and Campsell, and Askern to join the A19 for a short hop to then turn Left to Shafthills, and an unusual sight of a Mobility Scooter fitted with an engine, the rider scooting along at a fair rate, coming toward us from the opposite direction, waving as he passed, loud pipes and all.

On route and rounding a bend we had to stop for the level crossing barriers, only for the Mobility Scooter to pass us in the small queue, the rider waving happily, and as the barriers started to lift, he was gone with quite a turn of speed and noise, only for us to join Station road a little farther on and waiting again at level crossing barriers, The scooter rider in no mood to wait did a 'U Turn' and again passed us waving away, ( While waiting for the Barriers, there was much mickey taking about 'Captain Slow' being overtaken by a mobility Scooter and getting no overtakes in ).

After what seemed an age ( a good 5 minutes) the Barriers lifted but no train had come along, reason unknown, so off we go, but I had taken the wrong route , I should have turned left for Barnby Dunn instead of Right, so a trip through Doncaster it was ( much to the disgust of Mr Hardcastle ), during which we managed to loose Ashley, I was marking a roundabout when I see him in my mirrors, only for him to go blindly passed, so as the others caught up, I asked and got a reply that he had peeled off the ride,  back on track we headed for Thorne, eventually picking up the A18 for a run along to the Right Turn for Standtoft, and a left at the roundabout, only for Ashley to appear from the opposite direction and join us for the run passed the Trolley Bus museum, Trolley Bus and Driver doing a circuit as we passed, before turning Right into the Car Park at Sandtoft Airfield for a well earned cup of tea, and more mickey taking, Mr Hardcastle still going on about Doncaster. 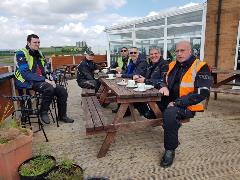 Part Two had us set off for the eagerly awaited run across Goole Flats to Swinefleet and Goole, with no traffic it was nice to use the open views across the bends and enjoy a nice ride on good roads ( no potholes ) and a good pace was maintained, Ashley  peeled off officially from the ride at this point as the rest of us carried on through Airmyn, Howden and along toward Gilberdyke and North Cave, As we crossed the M62 a car driver didn't bother looking or stopping at the junction, Dave Hardcastle taking evasive action and all the other riders letting him know the errors but he didn't acknowledge anyone, oblivious of him nearly taking out a group of riders, he just carried on!!, ( all this seen in my mirrors )

Halfway through North Cave we took a Right to South Cave, before climbing out of the village to Riplingham, dropping down toward Raywell and the Left Turn to Eppleworth, here we had to slow down,   ( 30mph speed limit in place for miles of road works for land drainage works ) before eventually doing a Left Turn onto the old Beverley Road and up to the Windmill ( Sails ) Cafe for lunch, ( not for Dave, he's on his Diet still ), Here we met up with Paul Rushton who was de briefing his Associate rider from the morning run, and after lunch we had a group run to Fimber for those who wanted to carry on, Jez and Tim deciding to leave us for home, we set off for Fimber led by Paul, only for the Heavens to open as we headed over the Wolds, arriving at a very wet Fimber for Tea under the porch, before everyone making the separate ways home, still pouring with rain.