A wet forecast was in order after a very wet week to say the least, but 8 riders elected to join me for a run out to the Fewston Farm Shop/Cafe and then onto Cracoe for lunch, John Coe volunteering to cover the back and keep us in check. After a quick brief they lined up then waited for me as I tried to get the route onto my Sat Nav, I gave up and set off with a Right out of Squires and going for the route from memory, that I had planned, and being only a small group we set a cracking pace and before you could blink we were out passed Towton and heading through Bramham and going cross country on Thorner Lane before turning Right to Collingham, plenty of Cyclist's and Horse Riders around to keep you on your toes.

Collingham,Linton and across to Kirkby Overblow before a Left onto A61 then Right to cut over toward the A658, cutting down Left through Castley before crossing the A658 and heading on the much used route to Farnley and the Lady Bower Reservoir and across toward the Sun Inn before turning Left down to Fewston across the reservoir wall and a Right Turn for the run up to the Farm Shop Cafe, as we turned in to the cafe, the Police turned off the A59, slowing down to take a good look at us, They must have known Team5 were out and about :):).

It was Pork Pies all round at the T&P stop as everyone tucked in to there food prior to part 2 of the trip, and as we mounted up we lost 2 of our team, as we took a right onto the A59 before turning left and heading toward Somerbridge and a pleasant trip around Brimham Rocks and a run back to Pateley Bridge, as we turned Right toward Ramsgill a Road Closed sign appeared, but with a Date of 17 June, of we headed up the really nice twisty road past the reservoir, through Ramsgill to Lofthouse, Bugger me!! Road Closed again but with today's date on it, so a bit further up the road, a discussion as to options was taken, as we could see the works vans etc. on the hill out of Lofthouse, Decision taken, is this the biggest 'U TURN' taken by Team5 ?? but it was a return to Pateley Bridge ( nice twisty route again :):):),  ) and a Right up Greenhow Hill.

Past Stump Cross caverns and lots of cars flashing lights for the police camera van secreted in the lay-by on the down hill stretch, but overtakes a plenty as motorist plodded past at 45MPH ( Why ??? ) but during this I had taken a Left to head down to Appletreewick, Dave Mitchell having not seen this was busy overtaking a Caravan and missed the turn, in true T5 tradition everyone carried on ( No, they did wait a while but Dave just kept on going ) and so it was through Appletreewick to Linton, Turning Left to pick up the B6265 and the short run into Cracoe and Lunch, when who should appear but Dave after heading up to Grassington and the running back to join us, a good lunch enjoyed by all, although no one seemed keen to pose for the Camera.

A run back to Squires for some via Embsay ( Steam trains on the railway as we passed ) passing a very quit Route 59 Cafe, around the back of Ilkley Golf Club, up Chevin Bank, Poole in Wharefdale and Squires for a good soaking ( The Heavens opened while Steve Harrison had a test ride on a Triumph Tiger 800 ) and Coffee

It was a good day out, Thanks to John Coe for nearly keeping us all together,  with a Giant 'U TURN' but fun anyway. 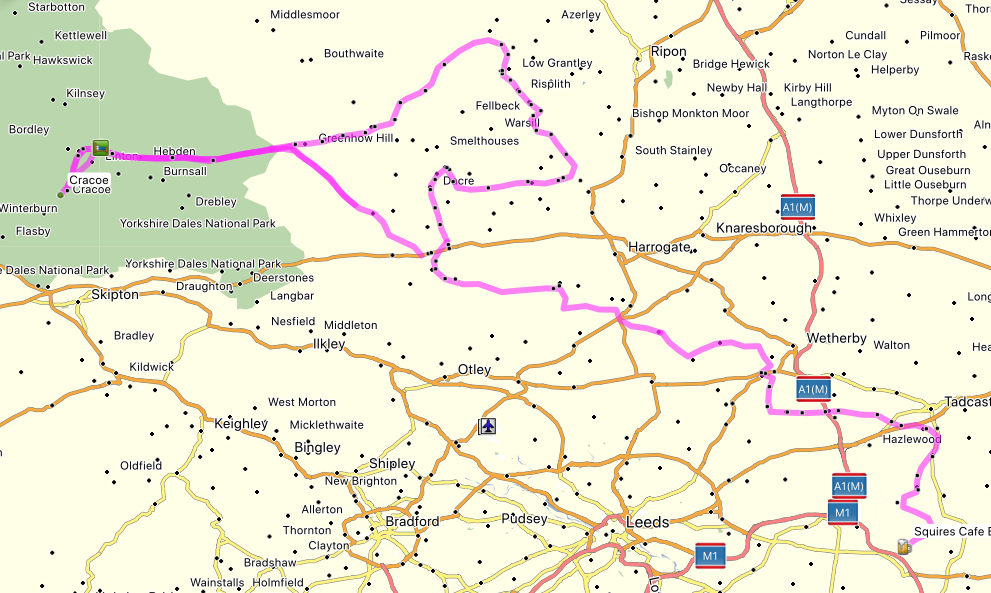