Posted on 19/09/19 |
1 x
Original Route was 'FAR TOO LONG' ( Ian said we'd need lights) so after a discussion it was a resounding 'Not Sure' via 'Not sure of that either' but finally we completed:
Wensleydale Creamery, Hawes – via Teacups Cafe, Pateley Bridge.

Brian arrived all eager and happy having spent time organising a route for his first T5 ride as leader, only for Ian McNiell to advise that his idea was a little on the long side and a re-think was needed, Brian came up with the Manor Farm Cafe, only to be informed it was there Rock Weekend with large numbers attending, so back to the drawing board it was, not a great start but after throwing around a few ideas it was agreed we would head off to ?? ??...

So after a briefing of a roughish kind of route,  8 brave followers lined up at the Gate at Squires ( Phil Marshall & Paul Rushton on there new GS's blending in nicely with all the other GS's ) and ( Nigel on his token Triumph )  off we go, A Right to Sherburn and then the well followed route out to Lotherton , Tadcaster, and out to Boston Spa ( the roads seemed very busy with traffic, must be the hot weather ) on to Collingham and the well used route to Sicklinhall, Chop Gate ( lots of pedal power riders about slowing things down in places ) onto the A658 / A61 then Left to Burn Bridge and then over to Lindley Wood Reservoir and Fewston Reservoir, across the A59 and around the back of Thurcross Reservoir, Left to Greenhow Hill and a Right turn toward Patley Bridge and our T&P Stop at the pleasant Teacups Cafe, and everyone pleased with part 1 of the ride.

During the 'T' stop it was agreed a run up to the Creamery at Hawes for our final stop, Mark Rogers leaving us, off we go heading to a very busy Grassington because of a 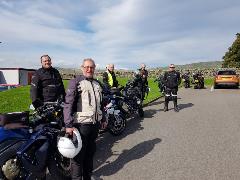 1940's weekend and onto the B6160 up to Kettlewell after which we then encountered a lot of traffic, Cars, Tractors, Cyclist's , even us Motorcyclists having to que up to get through the bottlenecks on the narrow Dales roads, but eventually we clear the bottleneck and take a left in Buckden to run up the very pretty Deepdale road following the River Wharf  before climbing up over the tops ( a very blustery wind blowing on the high ground ) before cresting the top for a pleasant run down to the Creamery ( again very busy with an open day on in the village)

It was a really good part 2 ( even with the traffic ) and a good pace was kept up by Brian, and all agreed it was a  good 1st Lead ride, Myself covering backmarker duties, while we enjoyed lunch out in the sunshine, Thanks to Brian for a good ride at very short notice having to change things around, coming up trumps with his choices, after lunch we split up to make our various ways home. 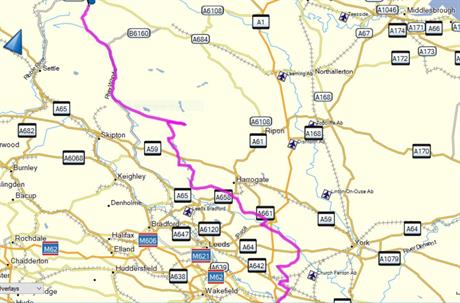