This Open destination ride was opened to all team 5 due to the very sad news regarding Stuart Marston, who had already agreed to lead the Training destination ride. As the destination for all rides had been planned as the George and Dragon in Whitley due to Paul’s BBQ the TD and OD rides were amalgamated. This created a bigger group than originally considered, unfortunately creating delays at traffic lights and other locations

The original idea for this OD ride, due to my dislike and non-use of sat nav systems, was to pick up an old fashioned paper map, locate roads not used previously, or not for a long period, and stitch them together using A roads or B roads at a push.

Turning right out of Squires, through Sherburn and on towards Cawood, turning right onto Scalm Lane to loop back to Selby. Following this road to Wistow where it turns into the B1223 and takes the ride into Selby via the back roads, arriving at the traffic lights at the old toll bridge, the first delay, as the route was ridden by myself on Thursday, with no problem, a larger group on Saturday introduced a delay. Under the railway lines and a left over the river, bridge 1, onto Denison Road, past the paper factory, a nasal treat, followed to the A63 where a right left was actioned to minimise ‘A’ road travel and continuing along East Common Lane, which morphs into Thief Lane for the first jaunt by the side of a river towards Barlow and the A1041 to link roads via Cambelsforth to cut off an A road run joining the A645 turning off at the roundabout towards Drax Village and Newland.

Narrow twisty roads to concentrate the mind and forget ‘A’ roads followed, down to the river Ayre and under the A645, bridge 2, a loop to return to the main ‘A’ road, this was not a U turn, but planned routing. On returning to the previous roundabout, taking a right staying on the A645 towards Goole over the M62. Through the outskirt shopping and DIY centres, right at the lights and over bridge 3, on the A161 into Old Goole at the side of the Ouse to Swinefleet, a very nice clean stretch of A161, good tarmac and little traffic. Through to Ealand, but turning off at Crowle along Godnow road, over the level crossing and bridge 4, where the road name changes to Chapel road and connects to the A18, where we hang a right and head towards Thorne, and the Delves Tea room. 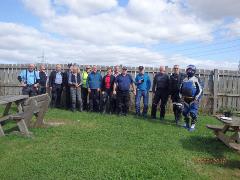 This was the major faux Pax of the ride as on Thursday when I rode it the number of cars in the car park and activity made it appear as though it was open, on arriving, it’s shutters were closed with no possibility of a cuppa.

Pete T suggested the Old Station House just out of Snaith, which not being too far from the route the option was taken. Over bridge’s 5, 6 and 7 on the route,

After Tea most of the participants left for Pauls BBQ or home, the remaining route to George and Dragon was completed by myself Pete and Chris.

Back through Snaith on the A1041, towards Thorne, and the A614, turning right after M62 bridge but before the river bridges to Fishlakes via between rivers lane, using some nice twisties and another 3 river bridges towards and through Sykehouses, Moss to the Askern traffic lights. Left and immediate right for a B road loop back to the A19, time was not available to cover the full route, Campsall, Norton, Little Smeaton and to Womersley before dropping back to A19 for final run to Whitley. 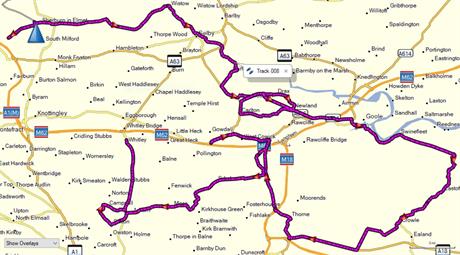