Posted on 24/09/19 |
0 x
Anyone travelling around  Yorkshire recently couldn't fail to notice the proliferation of yellow signs warning of road closures for the forthcoming World Cycling Championships, they're like the "Gilet Jeunes" of Yorkshire.

If you google the cycling championships and look at a map of the routes it looks like a jumble of Spaghetti from Tadcaster spreading North and East.  When deciding where to go for today's ride therefore it was painfully obvious that over the North Yorkshire Moors would avoid all the cycling malarchy as long as we cleared Cawood before 11.00am.

Just five riders for today's ride so after a quick briefing and Phil Marshall volunteering for back marker duties we were off on time.  Right out of Squires and down through Sherburn we were quickly at and through Cawood in plenty of time, phew.  On then to Escrick, Weldrake and Elvington before crossing the A1079  and on to Stamford Bridge.  Traffic here was awful so instead of going over the bridge a change of route saw us go right and then left towards Buttercrambe and right along the delightful twisty road towards Malton.

Part way along here we turned left and followed the narrower trickier roads to Kirkham Abbey and the left and right to cross the A64 and head towards Foston.  At the junction a right turn saw us scampering up the road towards Castle Howard, through the Arches, past the column and on down past the lake before making the right turn towards and through Coneysthorpe.  A left turn along here took us on another narrow road down to Amotherby, crossing the B1257 and through Newsham Bridge after which we turned right towards Kirby Misperton.  After passing close to Flamingoland we reached the A169 Malton to Pickering road where a left turn took us to the Steam and Morland Garden Centre for our T&P stop.

One of our number believes this is located on what was the old railway line which makes sense and explains both the name and the model railway that runs around the cafeteria.  After refreshments on the lovely sunny balcony it was back to the bikes for the second part of the ride. 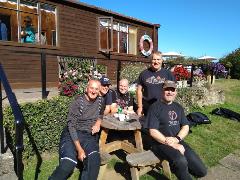 back of the railway station to pick up Newbridge road.  This leads on to Yatts road which borders the Eastern side of the North York Moors National Park.  Few places to turn off once on this road but it's a lovely, interesting road with virtually no traffic.

After crossing three fords only one of which had any water in the route took us to a "gated road", not wanting to ride this we diverted left and the took a right which in theory should have taken us back on to the route and on to Grosmont but somehow we (for which read I) got lost and we ended on the road to Goathlands.  Undaunted and this is still lovely roads we carried on and through Goathlands.  All of the "Adensfield" references have disappeared now with just Scrips Garage remaining from Heartbeat days.

After climbing back out of Goathland we reached the A169 Pickering to Whitby road a little earlier than the planned route of Sleights but we were quickly there and the a right turn over the bridge brought us to our planned lunch stop of Perrys Garden Centre.  Here again the weather was glorious and we enjoyed lunch outside with the steam trains chugging along in the background.

After lunch two of our number departed for home while the rest of us decided on a run back down to Fimber, taking in a detour through Littlebeck on the way just to give the riding skills a little bit more testing.

Thanks to Phill for back marker duties, copy of the route below. 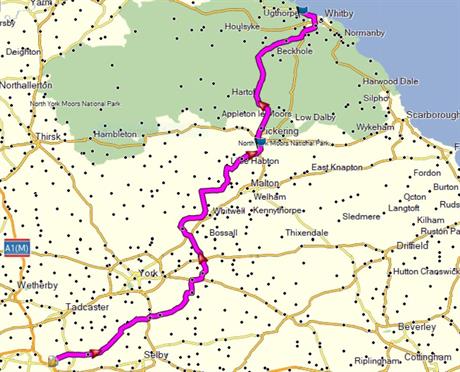