Foregoing the opportunity to watch England v Australia in the quarter finals of the rugby union World Cup live, it was my turn to do a lead.

For me it was a damp start to the ride over to Squires, and it was reasonable turnout of T5 and training team members.

Saturday's ride out was down for a TD of Boroughbridge, but after a discussion with those in long trousers, prior to volunteering for this lead, it was deemed to be okay to push on to Hawes, and using Boroughbridge as the T & P stop, it ticked those boxes.

So, before the usual ride briefing, Pete elevated himself to bestow the benefits of the Christmas bash, well it is the highlight of the forth coming festive season. 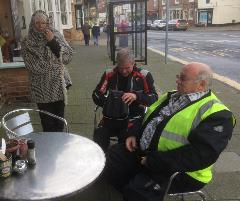 Four T5 members  ( Donna, Graham, Symor, and John Clowes being the back marker ), opted for the TD, and the balance for Phil Marshall's OD, and we headed left out of Squires, Phil going right.

As I had done a Reece of the route on Wednesday and found it wasn't great due to the amount of mud on the roads, and wanted to make for as pleasant a riding experience as possible. This meant sticking to those well used roads as possible, which was as follows;

The great north road through Micklefield turning right under the A1 ( M ) picking up the road to Towton, through Tadcaster, up Wighill Lane ( sounds all very familiar! ), the Roman Road to Cattal.

Being a small group it wasn't necessary to mark every junction and progress was good.

At the A59 we did a left then a right to take us through Whixley as I find on occasions that A59 junction can be a wee bit challenging, but as it happens it wasn't too bad.

From there on, it was through Little and Great Ouseburn, Upper and Lower Dunsforth, with the mandatory slowing down for the groups of horse / riders / and accompanying minders, finally, after all the effort to avoid the muddy conditions, the road to Aldborough proved a bridge ( road ) too far!

But hey, we arrived at the cafe Plenty in Boroughbridge and settled down outside after the other two wheeled brigade ( non motorised ) departed.

It was at this point that the two ex-military T5's treated us non -combatants to a military trip down memory lane, and maybe we should have donned camouflage textiles and tin 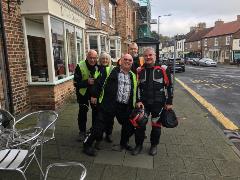 hats, ..... and being sworn to secrecy the full script cannot be disclosed, other than,..... No I couldn't. ( captions for the photos on a postcard please ).

On the arrival of the training team c/w associates, it was time to move on, 3 of our group headed off homeward to more pressing commitments.

With just the 2 of us remaining it was to Hawes and traffic being relatively light progress was pretty good, we headed via Thornton Bridge, Topcliffe, Skipton-on-Swale, Ainderby Quernhow and through Masham.

From there, toward Leyburn but cut through just before to Wensley, a right and then a left just after the 3 Horse Shoes Pub, to Redmire and the road runs pretty much parallel to the main Hawes road and is relatively quite but not uninteresting by any means.

Arriving at Hawes Creamery there to meet us was David Hey, having driven there to join us for a chat and light lunch, 2 of the OD group, Phil and Pete, arrived later having had a pleasant ride too.

Thank you to those T5's that joined me, and, John for his back marking and for his company on that ride.

Apologies for again, no map, but hopefully the script makes up for that and it is on my agenda to resolve that, .... some time in my lifetime!