8 hardy soles ( some not seen foe a while )  listened to Pete as he said “ I have a route” and gave a brief about the roads ( He wasn't sure what state they would be in ) but assured Ashley he'd be safe on his K1600, no Fords, Narrow Tracks  ( Big smile on his face ) as we all got ready to leave, Pete then decided to take an early 'P' Break, So we waited at the gate, and waited some more, until, 'Yep' we were off with a Right out of the Gate and on our way.

I wasn't paying attention at the first marking point, Pete signalling Left as I pulled over to mark the Roundabout as a left, and concentrating on where to put my size 9 I didn't notice everyone going straight on, “doh” I turned left only to see everyone heading away to Cawood, but it gave me a chance to warm up the oil as I chased them down.

All regrouped and Pete's Sat Nav reset, off we go again, the usual Escrick, Wheldrake , Elvington and then a left out to the A1079,a quick Right & Left had us going through Stamford Bridge and onto the Buttercrambe TT, A Police Camera van sitting tucked away in Buttercrambe Village, not doing to well I presume as the Weather and Roads were not for zooming about, but needs must as they say in North Yorkshire ( Safer Roads ), Anyway through the village and over the Bridges we go crossing the A64 at Kirkham Abbey before going on to Castle Howard and up Through Amotherby Village to cross the B1257 to Normandy and onto the A170.

It was here that we nearly hit a 'Bridge too Far' as the 'Road Closed Ahead' signs appeared, but in true T5 fashion onwards we go, passing more signs 'Road Closed Ahead' at River Rye, and so it was “Closed” and blocked with a Digger Machine and 'Cones', Undeterred Pete dismounted, walked the Bridge ( Hobbled really ) and came back waving, it's a goer ( I would have loved to have seen Ashley's face as Pete waved him on ) So off we go ' Off Roading', yes there was no road per say, only dirt where they had dug out the road but across we went, all safe and sound and away over the A170 and into Hutton le Hole for a T&P , only to be told there was a private function in the Cafe , (and we had left our invites at Squires), so up to the pub it was and finally ( I was in need ) the T&P Stop.

Refreshed, the Team Piccy taken , Ashley, John Coe and John Cowles left us to make there separate ways, as we headed off for Chop Gate, we took a Left off the main road out of Hutton le Hole and headed to Church Houses, getting stuck behind a fleet of 4x4 full of Shooters for the Pheasants, who seemed to like the roads for some reason keeping us on our toe's, But as we entered Church Houses “ Road Closed” again, this time the infamous words “ I Don't no where we are, Do you” came from Pete, so a 'U-Turn' was made and retracing our tracks it was back we go, picking up the Main Road again, and Chop Gate now became the Lion Inn for the Lunch stop. 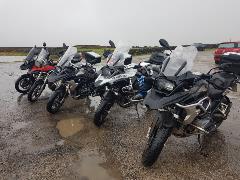 It was decided over lunch to Head over to the Helmsley TT via Westerdale and 2 Terrific  Fords, both with a good amount of water going through them ( just under a foot according to the marker boards ), the first one was pretty easy  but the second was a little more tricky as the force of the water was stronger, but no drama's and all safely through it was on to Chop Gate and the Helmsley TT, being empty of Traffic aloud good progress, but a White van Man pulled out on Phil Marshall, letting him test his New GS Brakes & ABS System, all ended well and Phil even waved at the Driver :):):):) as he passed him.
Thanks Pete for a really good ride in variable conditions and to Mark Rogers for keeping the back safe , and looking after 'DOH' Brains me. I didn't get the Team Piccy from Pete but I got all the Bikes at the Lion Inn, so you can work out who's is who. 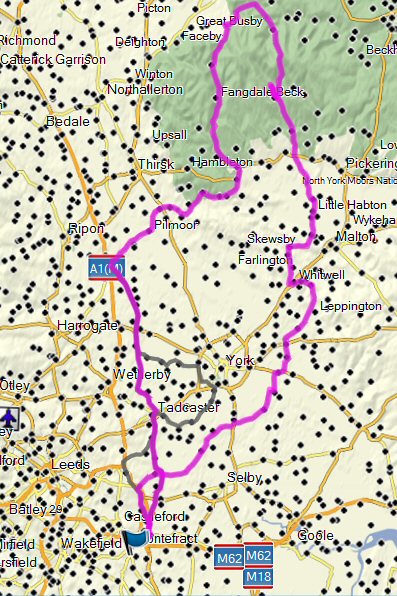