Posted on 26/11/19 |
1 x
A few years ago, you may recall, there used be a more traditional weather forecaster on television.  A bit of an eccentric older guy he used meticulously kept hand written records going back decades, the position and shape of clouds and the activities of various birds and wildlife in order to produce his prediction which was used to compliment the met office forecast.

I'm sure it was his forecast Pete was using when he called me on Friday evening  to assure me that if we travelled east the weather would be showers rather than persistent rain, this despite the fact I was simultaneously looking at a Met Office yellow warning of rain for the whole of East Yorkshire!

Never-the-less he convinced me and so it was that the pair of us arrived at Squires the following morning in pouring rain to meet with three other brave souls, Ducati John, Tim Andrews and new Team Fiver Alan Beattie.  Alan passed his advanced test a couple of weeks ago and this was to be his induction into Team 5 riding!

After  the usual briefing off we went right out of squires and on the traditional route through Cawood, Escrick, and Elvington eventually arriving at Stamford Bridge.  We obviously still hadn't travelled far enough east yet as it was still raining.  Heading out of Stamford towards the coast we turned left across to Skirpenbeck where we picked up the Buttercrambe TT, heading along here until the turning for Langton and on to North Grimston.  Climbing out of North Grimston and over the top down towards Fimber where a right at the roundabout took us up the hill to Seaways.  There's a useful bit of over hang outside the door where we could remove helmets etc out of the rain which was still persisting it down.

Whilst we were enjoying refreshments some of the observers arrived, equally wet and 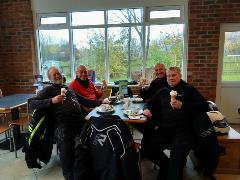 together we made up the only bikers in the cafe.  Don't worry, Pete said it will have stopped raining when we get further east!!  We were beginning to wonder at this stage whether further east meant getting on the Hull to Rotterdam ferry but no, Pete said it would be dry in Bridlington.

After we'd filled and emptied our bladders off we went again, this time with Pete leading but minus John who headed back home from here.  Back down the hill to Fimber and out through Sledmere towards Driffield.  Out of Driffield on the lovely B1249 through North Frodingham.  From here along to Skipsea and through to Mr Moos where miraculously when we arrived it had stopped raining!!

In true Team 5 style after lunch here we couldn't leave without Ice Cream which we ate while discussing a suitable route back.  Pete still wanted to prove it wouldn't be raining in Bridlington and so we agreed to go up to Brid and then turn left on the B1253 through  Rudston.

Saddled up again off we went without rain this time to "rain free" Brid and left towards Rudston, through here and a pleasant ride on to Sledmere, up to Fridaythorpe and from here along the A166 where we each peeled off to head home.  Needless to say it started raining again as soon as we left the coast.

Despite the rain it was an enjoyable ride out in good company, with many thanks to Tim for back marker duties.