Posted on 22/12/19 |
2 x
There he was, Chris, ready to take T5 on a mystery tour, when the voice of M Rodger Esq.  said, "did you see my post?" - blank looks all round, "I've volunteered to lead the ride".
Ahh! Chris, happy to reserve the mystery ride for another day, said be my guest.
And so it was that 11 of us, yes 11 in winter! set off led by Mark (were we going to Blacktoft we wondered) but no we went to Hessle instead, what, why?  Apparently Mark had left his place of work on Friday with vital keys and needed to return them promptly, Ahh! again.

Before the Hessle adventure, where we made an unusual U-Turn across a convenient break in an urban dual carriageway, we made our way from Squires via Cawood, Escrick, Wheldrake and Skipwith down to Cliffe and all the way back up again to North Duffield, but a quick step from Skipwith Common, nowt wrong with that.
There was a bit of mistaken marking at one point so that a spot of extra rounding up was necessary but let us put it down to poor explanation of the 2nd Person Drop Off system to a T5 newbie ;-(

Joining the A163 & 614 to skirt Market Weighton and heading toward South Cave we swept into the car park of a posh looking establishment on a country estate called Drewton's Farm Shop, where? Chris, whose memory is a lot better than mine, (come to think about it he's not alone there) said we had been there once before last year at about the same time.

Anyway a classic farm shop, entrance in a courtyard, local produce including butcher etc.
was run by some very cheerful and funloving ladies who made us welcome in the said courtyard.  Dunno what lead to that accomodation but possibly had something to do with inside the cafe was crowded with little uns who could've been frightened by a lot of muddy bikers invading their Xmas space. 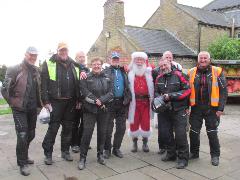 Because you see Father Christmas was there! :-)  And we met him, see piccies for validation.  He was a very jolly chap regaling us with comments like "I remember when you were a little boy sitting on my knee......." To which I believe I rejoined "And I never got over it!"

Small matter, we were well refreshed when we made our little excursion to Hessle and then set out for.....Gliding Club was it?  I think that even the most optimistic were a little sceptical about this ambition and having very happily swept our way past Skidby, of Windmill fame (a charming destination that Graham once took us to...eventually), Walkington, Bishop & Cherry Burton, through Bainton and Wetwang we finally slid into Seaways @ Fridaythorpe, agreeing it was far enough for that day.
The usual delights of a biker's caf, one endless teapot, bacon and you name it butties etc. were readily devoured and off we scattered for homes various. 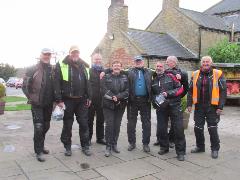 An interesting and varied route by Mark for which we thank you and for Chris who made sure all troups were rounded up.  Except for Tim who had arrived in FC's hat with tinsle on the bike and droppped off near his home in Bubwith and Dave Hardcastle and John Coe who I understand did make it to The Gliding club!
Oh and WD?  Winter Desination of course ;-)) 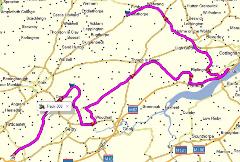