A cold and wet day, which was not forecast, saw 6 brave souls line up for today's ride. This would be led by our team 5 rep Pete Tidball, I would take the back marker duties for the day. Pete briefed us in the morning and his plan was to lead us to Helmsley via York, and some interesting back roads, 'over yon hills!' he exclaimed. This all sounded great, and so, to the bikes. Heated grips on- check. All zippers and poppers fastened- check. Heated vest on (if you're posh enough) – check. And off we set.

Right out of Squires, left at the lights in Sherburn onto Tadcaster we went, and then the right at Walton - all familiar stuff. We then took a right on to the B1224 York road, eventually picking up the A1237 York ring road. As you're probably aware, this road can be a bit of a mare, and at this time of year it was busy and full of grumpy Christmas shoppers heading out to do that shopping thing. With a bit of patient filtering, the traffic didn't pose too many problems. Many drivers were kind enough to give us some space. We must remember that filtering is a privilege not a right. With the metal cages dispatched in fine style, we took the left off the roundabout on to the B363 towards Sutton-on-the-forest.

By now, the weather had started to deteriorate, my bike showing 2°C... It felt colder! The rain was heavy and icy at times. The joys of winter biking! The road we were on is a great road and I know it fairly well, and this would eventually bring us to Helmsley. However, as Pete had said in his briefing, he had other plans...

We took a right turn to Crayke. On entering the village, I noticed that the rain had now turned to a combination of hail and sleet, and the temperature had plummeted even further. The GS was flashing ice warnings at me. This is the point I started to ask myself, 'what are you doing you mad fool?'. As we rounded a bend, we started to climb a hill and I could see the hail/sleet was starting to lay on the road. At the top of this hill, the group came to a sudden stop on an elevated left turn.  Our leader was down.
As Pete had taken the turn, he lost all traction on the slush mix of ice and wet, two wheels do not fair well in these conditions. As the rest of us pulled up somewhere relatively safe, and the ones with plug in vests (the posh ones) frantically tried to unplug themselves, we dismounted and rushed to Pete's aid. A passing couple on foot were the first to help and got poor Pete on his feet. His bike was soon up-righted by the boys of team 5. Pete had gone down hard and bruised his thigh. He was a bit shaken up, as we all are when these things happen, especially at the speed of which his bike lost grip. Luckily, the bike was saved any major damage due to the crash bars doing their job, with just few more scars added to Pete's trusty steed.
As we stood discussing if Pete was okay and what our next move was, a portly man appeared at his door dressed in silk boxers and string vest. He offered Pete a warm seat and a stiff one... We all stood blinking in disbelief... there really are some kind people left in the world. Pete, with a wink and a nod, politely declined the man's offer. It was decided that our chosen route may not be the best option on this day. A nervous U-turn, more of a duck walk for most of us in the icy conditions, saw us heading back down the hill and onto Easingwold, and to the warmth of the bakery café. 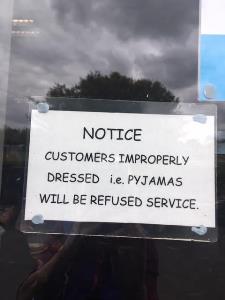 In the café, wet coats, gloves and helmets were removed, ready for a brew. The lovely young waitress came to take our order and Pete smiled at the young lady and told her she was doing a wonderful job, although she looked rushed and would she like to take a seat. He tapped the chair next to him with one hand, while rubbing his newly bruised thigh with the other. With a nervous laugh, she quickly hurried away to get our food order ready. For some reason, service was kind of slow at our side of the café today... Perhaps she had taken Pete's advice after all and had a sit down. Who knows? 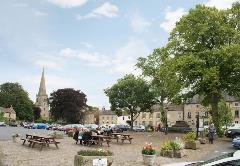 Eventually, all fed and refreshed, it was decided we would head to Brymores for an ice cream.. yeah I know, crazy bunch us team 5ers. Add a warm Christmas mince pie though, and it counts as one of your 5 a day. As we got on our way again, the sun had pushed through the clouds, a marked improvement from half an hour before. Alas, it did not last long, and the icy rain returned with a vengeance. Pete made the wise decision to cut short our mission and we stopped at Masham tea rooms instead. Soup, mice pies, all ordered, and Pete finally got his well deserved ice cream.
Despite the weather and Pete's off, we still had some great riding. Always a pleasure riding with Team 5.

Thanks to Pete for leading. All the best to you all for Christmas and the New year, have a good one folks.
I'm off to spend Christmas in Crayke! Happy days.
Cheers Phil

And thanks to Phil for brining up the rear and penning this highly desxcriptive and amusing piece.