Posted on 14/01/20 |
1 x
Well nobody fell off, despite the activities of one of our number facing the setting sun.
Assembled @ Squires in the New Year we had 16, yes 16 adventurers eager to see the new year's riding with enthusiasm.
However, this enthusiasm did not really translate into actual lead offers so Chris brought out his backup route which was in fact one he was minded to lead when Mark R made his magnanimous gesture and led us almost into Hull and back the Sat before Xmas.

Chris delivered a comprehensive briefing that was fully appreciated by some and confused others who have small bear brains like this author.
So off we set on one of the few available routes from Squires across country via Sherburn, Stilllingfleet, Cawood, Escrick, Wheldrake and up to Stamford Bridge.  Yeah it is so well known but it doesn't stop it being a grand route just to ride.
Keep going up to the A 64 and a quick left right heading towards Sherriff Hutton but turned right to join the Castle Howard road, has a few nice bends in it which we couldn't take full advantage of cos it was a bit cold and damp, but for the time of year, hey could've been a lot worse!

Turning right at the end of 'The Great Lake' on the Castle Howard estate we wiggled our way to Amotherby and instead of going on up one of the best bendy roads around up to Kirkbymoorside, we hopped over Newsham bridge, which was allegedly closed the last time we traversed it (oh yeah?) to the Garden Centre just south of Pickering. 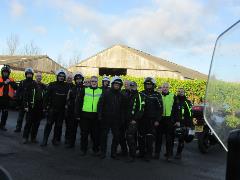 Now you can tell this spot is in Yorkshire because the prices are pretty reasonable and the portions are large and include a pud of the day etc.
After refreshment several of the team wended their own way to, well somewhere else, and the stayers turned up into Pickering as if to go up the A169 across the North York Moors passed the Fylingdales early warning station and to Whitby.  However, this was not in Chris's plan and instead we manoeuvred a natty little twiddle round the back of the town to gain a more exclusive Moors way just above the steam railway station.
The first part of this route through Stape and Egton was variously called, Newbridge Road, Yatts Road, Stape Road and much more intriguingly Kays Back Road before returning to the much more pedestrian Wheeldale Road.  Anyway enough of this geographical trivia, the road that weaves, climbs and drops from Egton Bridge to Sleights is the very best way of gaining A169 again without all that radar stuff in my view.

Hoping to stop at Perry's Garden Centre, which was closed, we carried on to Ruswarp and up the steep bank to Whitby and thus to descend to the good old Whistlestop Caf, where more Yorkshire hospitality was to be had.  As we parked the bikes in one of the 2  bays specifically reserved for bikes we were surpised to be joined in the other exclusive bay by a large Jag backing into it.  I did point out the sign to the posh lady who got out of the drivers seat, but she waved her hand vaguely and said something like: " Oh we've got permissions and anyway Mother won't go into the Cafe unless we park right next to it"
So there we have it folks, one law for bikers and another for posh Jag drivers!

Obviously this legal discrepancy did not spoil our biker's nosh.

Cheers to Chris for a cracking ride, oh and some olgiffer hung about at the back ;-) 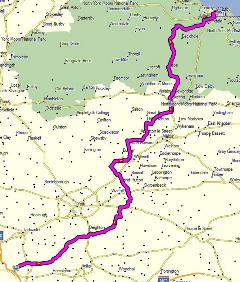