Posted on 14/01/20 |
0 x
We lined up at squires as usual to set off for the last ride of the season. The bike was reading 9 degrees and the weather was clear if a little chilly and slippy underfoot. The first challenge of the day was avoiding the large group of cyclists which had set off as part of a cycle event from squires. Using the rule of thumb of going the opposite direction we turned right towards Tadcaster on our way to fewston farm shop.

The road conditions were quite poor so Alan set a steady pace. On several occasions we encountered horses and cyclists clearly out for their last ride of the year. Apart from encountering a couple of car drivers who didn't understand the right of way everything went well and we arrived at the Fewston farm shop without issue. 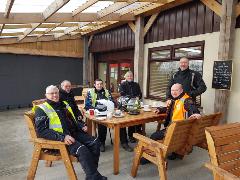 At this point two of our number left to head home while the rest of us continued on towards the gliding club near Thirsk. The roads still rather poor, we continued on at a steady pace. Alan set a course that kept us off of the main roads but on those which were mostly still treated. Everything was well and smooth flowing until we had to cross the A19 near Huswaithe, where someone was doing a brilliant job of creating a traffic jam by themselves.

After waiting for a couple of minutes for the traffic to clear, we carried on through Coxhold on our way upto the stop at the Gliding club.

When we arrived, things were rather quiet in the car park than they are normally. Nevertheless, we got off of the bikes and walked around only to find that the cafe was shut until the new year. After a quick planning session we decided to head to the garden centre just outside of Thirsk.

Jumping back on the bikes we rode down Sutton bank and joined the A19 out of Thirsk to head towards the garden centre. Only to find upon our arrival that it was...closed until the new year!

Many thanks to Alan for leading the ride out and Phil for backmarking.
Adam
Here's the route: 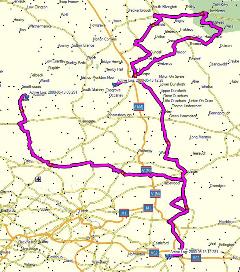