Yup it was windy in fact very windy, and very wet by gum and I was wondering how many would turn up, but I needed to keep faith, when I finally emerged from t' committee meeting it looked like about a dozen of them all "saying where we going then"?  Well obviously a nomination was needed and Andy Dickens took charge nominating Dave Hardcastle to lead to which we all agreed, and then let Dave know.  He could see he was out numbered so it was Dave who giving us a brief briefing said he didn't actually know where he was going but would head for Fewston farm shop for a T&P.

OK, so 13 intrepids set off ready for a wet & windy ride, they were not to be disappointed ;-)
Right out of Squires and taking a well ridden route (there aren't that many to take initially) and left just before Sherburn, right, left, right left, you know, through Bramham, Boston Spa etc. to finally be released onto the glorious back road to skirt Pool in Wharfedale.
I have to say it was very good to be able to test the roads for wet and mud on all of these roads, mud had largely been washed off but being in a largely arable area attention and caution were required as ever, having said that a decent pace was maintained.

Turning off the B6161 through Farnley led us to cross the narrower end of Lindley Wood reservoir, I know many have suffered from too much water in the last few weeks and our sympathies with them are deep, but it was also affecting to see that end of the reservoir so apparently full, not a normal sight in recent years. 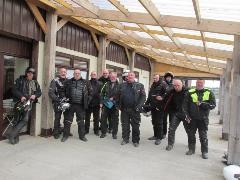 Up the B6451 and over the thin end of Swinsty reservoir boasting the same satisfying sight before we arrived at our 1st stop of Fewston Farm shop.  An excellent feeding emporium, reasonably priced and the food is well good being prepared in their kitchen.  Also, Vegetarians avert your gaze, a voluptuous selection of meat from their butcher and farm.
We dwelled for a reasonable time but you know when Dave gets up there's hardly time to get clobbered up let alone for a wee before we set off, those in the know go earlier ;-)  I haven't mentioned the weather recently, suffice it to say it was simply 'orrble, so much wind and rain, 'intrepids' was the right description (some would say there must be a degree of insanity involved).
Anyway some of the loonies had other things to do (very sensibly) and the remaining eejits launched on an amazingly wide loop to the gliding club, obviously from one really windy spot to another even windier one.  Through Thruscross, Dacre Banks and Brimham Rocks to join the B6265 (Ripon to Skipton road, so worth a ride in itself) hanging a left at Risplith (I know I've alluded before to the pronunciation of the village and a coupla pints, but just try it!)
Those of you who know this back road up to Masham will agree it is one of the best from a wiggly point of view and the B6267 from Masham to Skipton on Swale is it's sweeping relative, a meer hop skip & jump through Thirsk, up Sutton Bank to the famed Gliding Club completed the ride, where Liz the chef and the joyful Sarah were teamed up again to provide the splendid scranner :-)

Oh I almost forgot, as we crossed the bridge outside Masham the river Swale had somewhat overflowed, our valiant leader assessed the challenge and given the depth of the water and experience of the T5 members decided it OK to ford, so we did, steadily with purpose and grace!
Bob Wooley, a recent import from Rotherham IAM produced a short vid of the adventure, so click here to see it.

So a miserable day in many respects but a day our combined experience made it into a memorable and yay even enjoyable frolic.

Thanks to Dave for guiding us through and to Mark R for tailing us so indomitably.
Tootle pip
Pete

Here's the route, see what I mean about the long sweep round ;-) 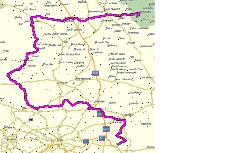