Posted on 07/07/20 |
1 x
Well we tried something new this week to help simplify some ride challenges when there are more than 6 peeps to be led.  11 riders turned up @ Monks Cross for the OD ride so Chris, whose route it was, shared it with Pete and the groups of 6 & 5 set off 5/10 minutes apart.
It worked OK all were suitably distanced at the start point and when we arrived at the same stop off points we kept pretty much to our groups and obviously the set offs were still staggered.

Anyway the ride itself was just brill, incorporating some old favourites it is true, I've always said there's nowt wrong in that, it's the way they're strung together that enhances them ;-)
The first favourite was part of a road to Helmsley up to Stillington and the mini TT to Sheriff Hutton, down and across the A64, up part of the Buttercrambe to Malton TT, right past North Grimston and left just near to the Fimber Cabin Caf to Sledmere 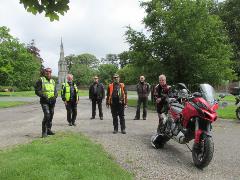 where we stopped for coffee etc., so far so good, roads were immaculate for good progress ;-)

A quick whoosh across the A64 again through Yedingham and Snainton led us up to Troutsdale, here the progres was slower as anyone that's ridden up there will know, roads become much narrower with pretty sharp bends, bit of mud, grass and gravel to cope with and at one point a very tall tree had just been blown down resting on a fence so not actually on the road, bit lucky that, it's not a road you'd want to turn round on really :-(

The next section certainly had its challenges, e.g. after a good romp towards Whitby we descended steeply into Littlebeck which seems to be at the bottom of the NY Moors geography and by dint of good balance, brake, clutch and throttle control struggled back up to Blue Bank and down into Sleights.
Hanging a left the road twisted and turned pretty adjacent to the River Esk to Egton, 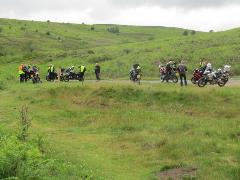 Egton Bridge and back down the old 'Roman Road' arriving at a Ford (with some water in), Egton Grange, and an excellent spacious area to partake of our packups for lunch, shared with a Chaffinch, obviously used to folks picnicking here. 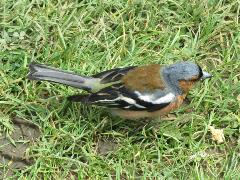 Alan B took the piccies here, good job Al.  At this point several of our fellow travellers left, but not enough to make just one group.

That was not all, oh no, there was just as intriguing a route back to York which led us down to Stape and Cropton, good micro brewery pub there...The Sun Inn...especially if you like a sharp hop.
Now some would have thought OK meander down to Pickering and home, no chance, heading towards Rosedale Abbey some of us might of thought "not Chimney Bank!"  Yup it was so, another challenge of balance, clutch, throttle etc., and then Hutton le Hole, Kirkbymoorside and an oddly easy ride across to Helmsley.

The glorious finale ensued by a fast flowing ride via Ampleforth, Coxwold, Crayke and down to the York ring road via Stillington.

I think I said at the beginning it was brill....well I was right for once! ;-) 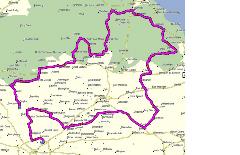