6 hopeful T5’ers –ideal number  for social distancing -  gathered at the Garforth gardening centre and ride leader Graham West had already announced the route which was to Thorne for  T&P & comfort stop with toilets (yes, he had the key to the river barges marina loos) to be followed by a second leg to Selby for lunch (and, would you believe it surprise, surprise, another set of keys  to another toilet block) ; how thoughtful Graham is as a ride leader, he does think of his flock.

Mike Vournas offered to be the back marker as he had a yellow hi-viz and off we went for the first leg. About 10 minutes inside the ride was the – wait for it – 1st U-turn which  I understand is mandatory for T5 rides . Off down a single track at Monk Fryston we followed a car for a while and a horse plus rider was going along at a very slow pace, no passing place and nowhere to overtake. Eventually the narrow track split into two , the horse and the car  went one way and another car emerged out of the other leading to a complete standstill. A pantomime moment, it was easier for the bikes to U-turn and re-join the original road.

Then an uneventful ride over Brayton, Camblesforth, Drax,  Rawcliffe bridge and down to Thorne barge mooring for T & P at the aforementioned marina toilets, a quick chat and off on the bikes again. 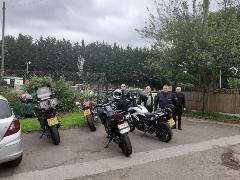 The 2nd half was much more enjoyable. From Thorne onto the A18  east into North Lincolnshire, a sharp left and then onto the wonderful flowing twisties of the A161 through Ealand, Crowl, Eastoft and Swinefleet, a stretch of around 10 miles of perfectly surfaced roads , full visibility all round  and hardly any traffic ; the one or two slow cars we encountered were quickly dispatched by the skilful YAM riders.

Then over Goole docks, Airmyn, Howden, Hemingbrough and eventually Selby barge marina for a spot of lunch by the bikes, a chat and putting the world to rights, and after  a visit to toilets #2 for those who needed it, the crew dispersed toward their respective home destinations. 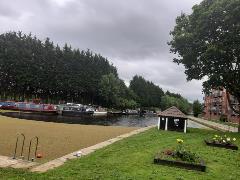 Thanks to Graham for a nice morning’s ride, all in the dry, and no need to clean the bike at home.

The team piccie is from the Selby mooring marina and the route attached. 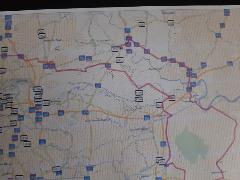